Climbing Up A Slide Isn’t Scary. This Is Scary.

We May Actually Outlive Our Children And That Scares Me 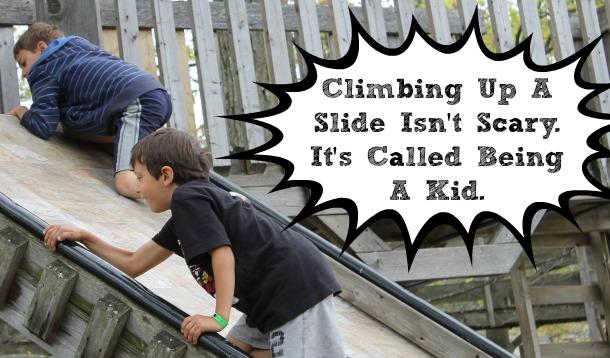 So there’s this school in Auckland that signed up to be a part of a study to encourage active play. Only the principal, who is now my hero, took it a step further and decided to abandon recess rules completely.

A drop in bullying, serious injuries, and vandalism, and an increase in the kids’ concentration levels.

And what did the kids do to occupy themselves when they were outside? Well, they climbed trees, skateboarded, and used their imaginations to create games.

Yet, here in our own city of Toronto there’s a school that banned balls. The school my own boys go to has its own set of recess rules that I find just as ridiculous (but I make sure they follow them because they are the rules that are in place).

Parents, WHAT THE HELL ARE WE DOING?

Listen, I freely admit I sway more to the free-range side than helicopter in terms of parenting (although I do have helicopter moments, uncut grapes being my own personal nemesis) so I get that we all have our own issues. And this isn’t a my-way-is-better-than-you-way rant.

This is a rant about how we, as a society as a whole, are screwing up big time.

Because really, what are we doing? Our kids are over-scheduled with activities and when they aren’t being taught that ‘exercise’ means being driven to a sport for an hour a few times a week, a good portion of our kids tend to be plugged into technology.

Don’t even get me started on the whole “we have to start our kids using technology now so they don’t get left behind.” Here’s a newsflash…the technology we have now will be obsolete ten years from now just like the technology from a decade ago is obsolete today.

Want to know who picks up technology in about 3.2 nanoseconds? Kids. You don’t have to concern yourself about with your young offspring falling behind because they’re the ones who are going to be teaching it to you. Give your child Minecraft and 20 minutes and you’ll understand what I mean.

We’re worried our kids are falling behind so they are starting school earlier and earlier, yet we’re also worried they may hurt themselves—with things like BALLS—so we’re creating more and more rules to help protect them when in fact it’s this thinking that is really hurting them.

Children need free time to foster creativity, be active, learn how to get along, and just be kids. Not everything they do needs to have an end to justify the means. The entire process is justified because they are learning. Not with books and exams, or through coaching and drills, but by simply doing.

Our children, yours and mine, may be the first generation to be outlived by their parents. Think about that for a second…it’s a possibility that due to health problems from lack of activity and bad eating habits that we could actually outlive our children.

Our children may not have the childhood freedom we did, and yes, there are certain instances where I did stupid shit—just like the rest of you—but that stupid shit also taught me life lessons. Like how to get along with others, and how to use my imagination, that books are magical, and attempting to learn how to drive a moped at the age of ten is a bad idea and will leave you with a scar on your leg.

So tell me, why are we doing this? Why are we letting our kids sit around in front of screens all day? Why are we not telling them to go outside to play? Why are we exchanging free time for scheduled activities?

Why do we continue to create rules that we say are meant to protect our children when in fact those very rules may be hindering their social, physical, and emotional growth?

My kids playing with hard balls may not scare me but these questions sure as hell do.