The No Technology Or Television Rule 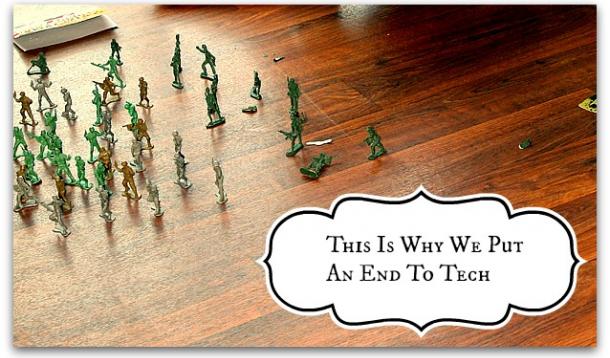 Last week, we put an end to tech at our house. With a few minor exceptions, from Monday to Friday there is no use of iPods, computers, cell phones, or television.

It had been weighing on my mind for a while; our family being together but disconnected seemed to be happening more and more. It's a slippery slope this technology thing. We would all be in the same room, but my older son would be on the computer watching YouTube videos, I would be on my laptop watching Netflix or tweeting for my job, my younger son would be watching television or playing on his iPod, and my husband would be on his laptop. I would look around and in my heart knew things were wrong, but it seemed so simple. We were all occupied.

Then an event transpired, and I knew that simple wasn’t the way to go anymore.

In my mind, I kept going back to our vacation to Sherkston Shores when I told my kids they weren’t allowed tech of any kind. It took less than twenty-four hours for us to be talking and laughing more; we were reading, we were drawing, we were singing. The boys spent two hours creating a game with a ninety-nine-cent bag of plastic toy soldiers. We were together and we were connecting.

So last Sunday, we sat down and had a family meeting. My husband and I explained these new rules:

There would be no tech or television from Monday to Friday. The exceptions would be that the boys could use the computers for homework research, my husband would be able to use the computer first thing in the morning to check his investments, and I would make every attempt to finish my work by 4:00pm each day.

There were also other rules implemented, and we all filled out a form about what we could each improve on and what we wanted each other to work on to make our family better.

As you can imagine, their reaction was no less than jaw-dropping.

You’re probably wondering how it’s going; what happens to a family that just disconnects?

It’s not as difficult as you think. We’re already talking more, and we’re playing board games. I get more help preparing dinner, and there’s always music playing at our house. There has been an impromptu sleepover, and the kids have discovered they love looking through photo albums. Last week we set up a Nerf gun shooting range to see who was the best shot.

This is not to say it’s all easy. It was easy sending my kids upstairs to watch television so I could finish just one more thing. It was easy to have them spend an hour playing Minecraft so I could get dinner together in peace.

It’s not easy listening to my older son tell me he has a hard time wrapping his head around the fact that this no-tech thing isn’t a punishment—it’s forever.

I don’t want my kids to feel like they’re being punished because what we’re trying to do is the complete opposite of punishment.

There is no wrap-up to this post. There’s no one line that will tie this up in a neat little bow, because quite frankly, I have no idea how this is all going to play out. Will it help us connect? Will we stick to the plan?

I don’t know. I just know that if you’re planning on eliminating or reducing tech time in your family, and you think you can't do it, you can. The thought of doing it is scarier than the actual doing of it.

And in the (very) short time we’ve been doing it, it’s already helped us reconnect as a family.

We may even pull out the toy soldiers tonight.

P.S. If you have any specific questions about our experience with no tech, leave it below in the comments, and I'll answer it for you.

Sharon DeVellis: Inside Scoop A Letter to the Husband of Every Mother of Young Children