The ONE CHANGE you can make to wake up happy 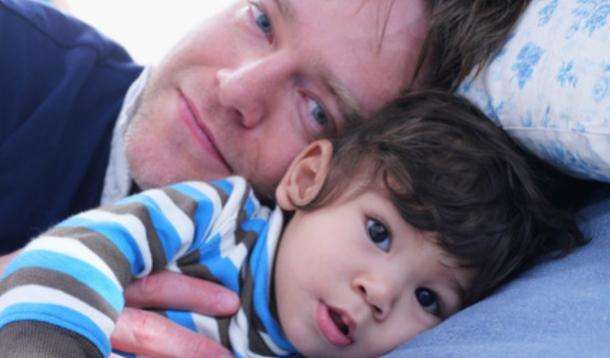 My kids have always been early risers. Since my oldest was born, seven (and a half) years ago, I’m pretty sure I haven’t slept in past 8:00AM.

No, no, that’s ridiculous.

And it infuriated me. I mean….I was angry.

I have three kids. And because I’m a super smart lady (or as some would say CRAZY INSANE BANANAS), I had all of them less than three years apart. They are now aged 7, 6, and 4. I love them dearly, I promise.

Once my kids were old enough to not sleep in their cag…I mean cribs…they realized they were now able to leave their room whenever they liked. This terrified me to no end. I was so afraid I wouldn’t hear them leave their room.

My daughter’s favourite way to wake me up is by slapping my face or holding both my nose and mouth shut. She’s darling.

I suppose that’s better than the creepy stare from my son four inches from my face until I wake up. Oh I don’t know…

I’ll take both of those options over the sound of my kids putting a mystery object in the microwave without asking first thing in the morning.

Years ago, my days would start off with a big SIGHHHHHHHHHH. “Here we go again” would rattle around in my brain. I would say to my kids: “WHY? Why can’t you just sleep until 7:00 or 8:00? WHYYYYY?” Mother of the year, I know.

I put lights in their room that came on when they were allowed to get up.

Fail. They would just crash around and wake up their siblings and play with the outlet the light was plugged into until I (angrily) got out of bed and took everyone downstairs.

I let them stay up later and later for weeks on end, hoping it would extend the time they slept in the morning.

Fail. They would wake up JUST AS EARLY but now they were cranky all day because they were TIRED. Grumpy kids = Grumpy Mom.

I bribed them with chocolate cake for breakfast if they would JUST. SLEEP. IN.

Fail. They would still wake up, come into my room, and then cry because they don’t get chocolate cake. Crying first thing in the morning is not my thing.

And after hours of reading, I realized I only had one choice.

I had to change.

It wasn’t my kids fault that they’re excited to wake up and start their day! Imagine being three and waking up in your bed! You get to wake up and PLAY. With TOYS. And EAT. And PLAY MORE. If that was my day, I would probably wake up early and go get my Mom too.

So I changed my attitude. I stopped looking at the clock and starting looking at my kids.

Their faces were so happy in the morning and they were so full of energy. Why couldn’t I be like that?

Besides, at the time, I was staying at home with all three. All I had to do was go downstairs, make a cup of coffee, and make sure my kids didn’t die.

There are worse mornings in the world.

With every day that passed, I woke up happier. Some mornings were 5:00AM, some mornings were closer to 6:00AM…but it didn’t matter. What mattered was that I was spending more time with my kids without yelling, fighting, or being angry.

It was a simple and small change, but it all had to do with me.

Fast forward about four years. My kids still get up ridiculously early which means I do as well.

Now they all go to school, and I work. But can I tell you one thing that is so super amazing about it all?

We’re never in a rush. Ever.

I've been told one day they’ll be teenagers and I’ll be dragging them out of bed…right? I might be happier now, but that doesn’t mean I don’t cling to the hope that one day I’ll get some serious payback.

If you have early risers like I do, try your best to enjoy it. One day it will end and we’ll all apparently be sad. But for now, invest in some quality under-eye concealer and you’re good to go.

RELATED: Avoid the "Where is my...?" Argument by Creating This Kids Zone