Why we're avoiding the Mall until April 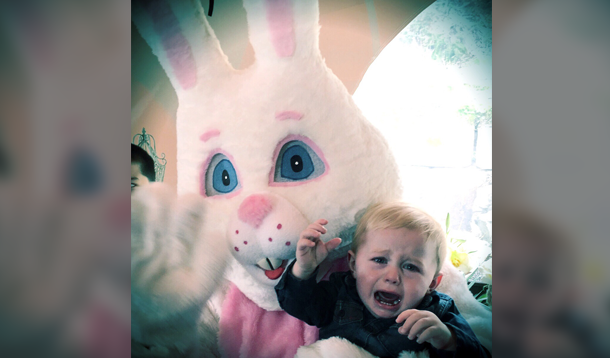 Have you ever looked into your child’s eyes and seen fear? I mean REAL FEAR? The kind where their eyes bug out of their head and they can barely breathe because they are so intensely scared?

This is what happens when my daughter spots a mascot.

They can be on the other side of the mall, or hockey rink, or planet, but she will see them and be terrified until we leave, or they do. It all began with a colossal walking lifejacket trying to give her a high-five…or was it the cheesestring? It doesn’t matter. It’s all been downhill from there.

It’s sad and hilarious all at the same time.

So you can imagine my joy with this (new?) phenomenon of getting your picture taken with the Easter Bunny at the mall. I feel as though there is a requirement for the Easter Bunny suit to be dirty and smell a little bit. I’m sure it was white and fuzzy at some point, but when you have a billion fresh-out-of-the-springtime-mud children sitting on your lap, you’re going to look a little grubby.

Also, the big googly eyes, gigantic paws and overbite don’t help this massive rabbit look any cuter. No, it’s terrifying to the best of us. I don’t really blame my daughter for wanting to avoid this bizarre creature.

And when did we start getting pictures taken with the Easter Bunny? Why is he the new Santa? Santa is terrifying enough, why do we need a growth-hormone-gone-wrong Velveteen Scaryface?

Isn’t he supposed to come at night and hide chocolate around the house? Actually, that’s kind of scary too when you think about it too much. But chocolate makes me forget that I’m scared.

I’m not sure why, as parents (me included), we all feel the need to celebrate every holiday with an awkward picture of our kids on the knee of some make-believe critter, like somehow the holiday just won’t be the same…maybe we do it because it’s hilarious and strange and makes for great facebook photos. For the record, they make GREAT facebook photos.

All I know is, until that nightmare-inducing bunny isn’t at the mall, we will not be doing any shopping.

If you have any hilarious/terrifying pictures of your kids with a crazy looking mascot, please share them with me to make me feel better and make my day awesome.

Seanna Thomas: ABC Kitchen How to Deal with Early Risers and Emerge Happier For It