Is feeding a baby rice cereal first based on science or tradition? 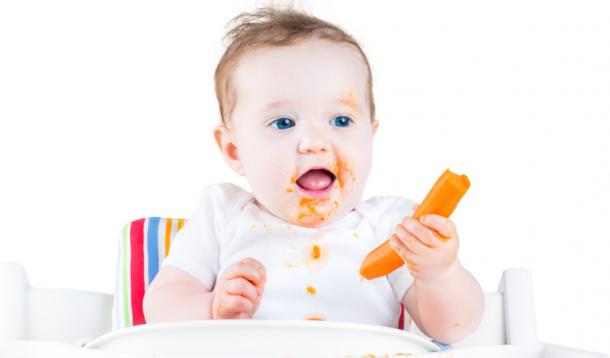 My third baby is six months old today, and about a week and a half ago, he tried his first real food. Want to know what it was? Salmon! Not pureed, not mashed, and not mixed with breastmilk. Just barbequed salmon with a bit of olive oil brushed on before grilling, in pieces that were big enough for him to pick up and soft enough to easily break apart in his mouth.

The reason why it was salmon? It's extremely nutritious, rich in iron, Omega-3 fatty acids, protein and flavour. And it was what we happened to be serving the night that our baby reached out and grabbed a piece off of my plate as we were eating dinner. I thought "this is the perfect first food for you — let's start solids!" After all, he had been holding himself up for a couple of weeks and was clearly interested in real foods. As a Dietitian, I often receive questions about starting solids — one of the most common ones being "what is the best first food" for my baby? There is a lot of confusion (and misinformation) out there when it comes to starting solids (when to do it, how to do it and what to serve), so I want to provide you with the most up-to-date information available and my suggestions for giving your baby the best start to real foods:

What the best first food for a baby?

Traditionally, iron-fortified single-grain cereal (think rice cereal) thinned out with breastmilk or formula was the gold-standard first-food for baby. Is it the best first food though? Not necessarily. Alice Callahan, author of Science of Mom, (a fantastic book that I would highly recommend to parents) explains on her blog that "baby cereals are often recommended as first foods, but this is based more on tradition and culture than on any scientific evidence. There is no reason why you can’t introduce those great heme sources of iron (meat, poultry, fish) as first foods, and in fact, this is now recommended by the AAP [*and the new Canadian Infant Feeding Guidelines]."

The iron found in infant rice cereals is non-heme iron, which is less bio-available (not absorbed as efficiently) than heme iron sources such as meat, fish, eggs, and poultry. That being said, iron-fortified single-grain cereals such as barley or oat cereals can still be good first food options if parents feel more comfortable going this route. It's really a personal choice. Fortified infant cereals are safe, convenient and shelf-stable. They can come in handy if your baby attends daycare or if you're in a rush and want to make sure she is getting her quota of iron for the day.  But some parents become too dependent on these cereals, which means their babies could be missing out on other nutrients. Baby cereals, although nutrient-fortified, don't stack up as well nutrition-wise as other iron-rich foods such as meat, fish and eggs that also contain protein and fat — two important nutrients for baby.  If infant cereal is your baby's first food, make sure that you're also introducing a variety of other foods, flavours and textures within the first few months of starting solids. Why are iron-rich foods so important to introduce at the beginning?

Iron-rich foods should be introduced right from the get-go, as your baby's iron needs increase around six months of age. That being said, there is no rule saying that your baby's first food can't be avocado, carrots, green beans or banana. You just want to make sure that iron-rich foods are introduced right around six months of age as well, and served daily. Iron is an important mineral for brain health and red blood cell production, and although babies have a reserve built up from being in the womb, at about six months it starts to deplete, therefore a daily dose of iron-rich solid food is needed to keep your baby physically and developmentally healthy. Babies between six and 12 months of age should be offered iron-rich foods at least twice a day (one to two small servings). Soft and tender pieces of meat or finely minced, ground or mashed cooked meat, de-boned fish, poultry, well-cooked whole egg, beans, and lentils are great first foods. Add in a serving of plant-based, non-heme iron (lentils, beans, spinach) and your baby will be getting everything he needs iron-wise. No infant cereal needed.

Should you be concerned about arsenic levels in infant rice cereal?

In short, yes. Parents should be aware that rice-containing foods (such as infant rice cereal) do contain arsenic, as well as other metallic elements such as mercury and cadmium. Unfortunately, the rice plant is really effective at soaking up these elements out of the soil and ground water. To make matters worse, the rice plant is very efficient at absorbing inorganic arsenic (a form of arsenic that lacks the organic element carbon), which is much more harmful to humans than its organic counter-part. And unfortunately for health-conscious parents, brown rice has even higher concentrations of arsenic than white.

Arsenic is a known carcinogen and can also cause cardiovascular, respiratory, metabolic and immune-related health issues.  In a new study out published in JAMA Pediatrics, the parents of 759 infants were interviewed at various points in the first year, specifically about their babies' rice and rice product intake. At 12 months of age, the urinary arsenic levels were higher for those infants who ate infant rice cereal compared with those who did not eat rice or rice products. Because babies and young children are more sensitive to the harmful effects of inorganic arsenic, and consume higher amounts (per kilogram of body weight) compared to adults, too much rice cereal may pose a health risk. And iron-fortified infant rice cereals aren't the only food we should be concerned about--there are also lots of rice-containing toddler foods that are on the shelves including crackers, puffs and cereals. The good news is, the FDA has recently set limits on  the amount of arsenic in these infant/toddler foods, which is one step in the right direction.

Should you panic and completely avoid rice products when feeding baby?

No. The occasional serving (once or twice a week) of rice cereal, or whole rice — whether brown or white — is likely completely fine when included in an otherwise balanced and nutritious diet. Should you serve rice cereal to your baby daily? Probably not considering the growing amount of evidence that we're seeing on arsenic and rice cereal. Make sure that your baby's diet is varied and includes those iron-rich whole foods mentioned above, vegetables, fruits, healthy fats and whole grains such as oats, barley, and quinoa to ensure that all nutrient requirements are being met.

For more information on the arsenic and rice connection, check out this great blog post by Alice Callahan, PhD and Author of the book Science of Mom called The Whole Truth About Infant Rice Cereals and this article, Ten Things to Know About Arsenic and Rice by Debora Blum.

For more information on when and how to introduce solids (and some of the challenges you might come across when feeding your baby), check out this post highlighting the latest infant feeding guidelines, and my favourite finger foods to give to your baby. Here's a post that walks you through the when's, where's, how's and what's of starting solids and another one discussing the benefits of baby-led weaning.

If you're looking for free daily advice on kids nutrition and feeding, as well as yummy and easy kid-friendly recipes, visit my Facebook page.

RELATED: 3 Fast and Healthy Finger Food Recipes for Your Baby