The Truth About Family Meals With Young Children 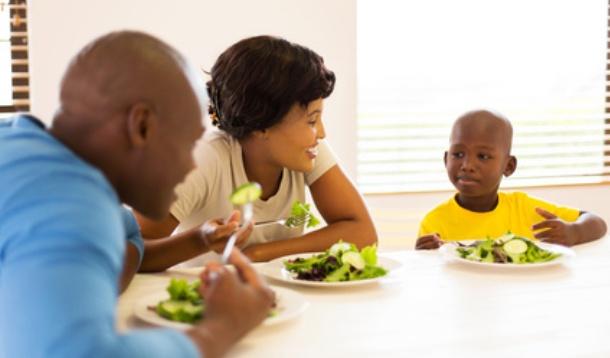 There is a reason why I brace myself before we call the kids to the table every night for dinner. Actually, there are several reasons. Family meals with young kids, for the most part, aren't peaceful or overly enjoyable.

Instead, it's reminding your kids to sit properly and pull their plate closer to them so their food isn't falling on the floor; cleaning up spilled milk that is now seeping through the cracks of your table; watching as your toddler picks out every trace of colour from her casserole, leaving only the cheese and pasta to be eaten... kind of; and getting up 10 times to refill milk or water, wipe food out of hair, and get your son more bread because that's still his favourite.

If you're lucky, you might have a few bites of your own meal now that it's cold and not nearly as appetizing as it was 20 minutes ago. And then, after dinner, it's at least 20 minutes of sweeping and wiping up food that has fallen onto/smeared into the floor, washing dishes, wiping tables and counters and putting away leftovers. And this doesn't even take into consideration if you have an extreme picky eater or if your child is going through a food jag and refuses to eat anything but bananas. That adds a whole other worrisome and challenging dimension to the family meal.

A few reasons why family meals with young kids are less than ideal:

When you have toddlers or preschool-aged kids, dinner often becomes a battle of wills--your tot is exercising his new-found independence and control by refusing to eat his meal or demanding something else, and you are trying to coax him into eating "just three more bites" so that he consumes more than the two dinner rolls that he scarfed down.

There's nothing worse than whipping up a nutritious and delicious dinner, serving it pinterest-style to your child on their favourite plate, and having them pour their milk all over it and refuse to eat even a bite. Can you tell that this has happened to me more than once?

When you're positive that more of your child's meal has ended up on the floor, on their clothes, in their hair, and all over the table rather than in their mouths.

After a long day of parenting (and/or working), the last thing you want to deal with is battling it out with your kids at the table after you've prepared a nice dinner for them. It can be frustrating, defeating and draining.

BUT despite all of this, family meals are a no-brainer for us.  Here's are four very important reasons why we will, without a doubt, continue to have family meals despite the chaos:

The small moments of connection and laughter

Those moments where the mood is calm, the kids are eating nicely, and we actually have a conversation where curious questions are asked and thoughtful answers are given are precious. When my five-year-old proudly tells us about the tower that he built in kindergarten that day, or when my two-year-old gleefully tells us (in her own words) about her trip to the library all the while munching away at dinner, it all seems worth it. When the conversation somehow flows--even for only a minute or two--and there are smiles exchanged and connections made, it reminds me why family dinners are important.

The opportunity to show our kids what normal, healthy eating is

Even when our kids hardly touch the food on their plates or declare that their previously favourite food is now "yucky," I know that by watching us eat a variety of different foods every night, they are learning that this is normal, even though they aren't ready to do the same. As a result, they will be more likely to widen their palates and eat a variety of foods and dishes as the get older and when they're ready. As parents we are our young kids' number one influencers when it comes to eating (and habits and behaviours in general), so even though it may not seem like modeling healthy eating makes a difference through the early years, it really does long term!

To boost our kids' long-term relationship with food

When we gather at the table--whether my kids eat or not--it gives my husband and I the opportunity to nurture our kids' long term relationship with food. Here's how:

To lessen the chances of trouble in the teen years

According to a 2010 CASA family dinners report, almost 75% of teens think that eating dinner frequently with their parents is very or fairly important.

It's also been found that frequent family meals lessen the chances of teen pregnancy, depression, eating disorders and obesity, not to mention boost self-esteem, academic performance, and a sense of resilience.

Not surprisingly, the report authors believe that the biggest reason why teens who participate in family dinners are less likely to use drugs and alcohol is because family dinners provide an opportunity for kids and teens to talk to their parents; tell them about their day and what might be bothering them. Clearly, family meals aren't all about the food--the connections and communications that happen are the most important part.

I post free information daily for parents about kids nutrition and picky eating on my Facebook page- feel free to check it out!