There are so many unknowns... 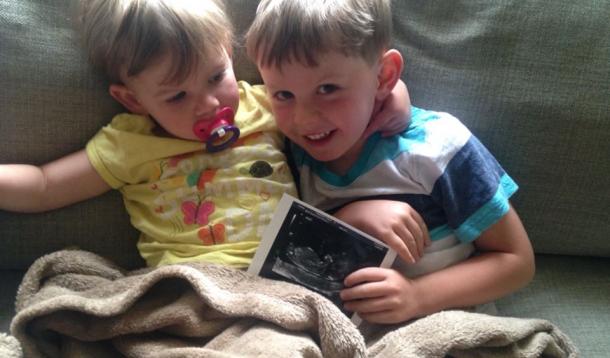 I've had two completely different experiences with my first two babies. Ben, my eldest, was born in a frenzied panic, with 15+ people in the delivery room, serious talk of an emergency c-section and then ultimately, a vacuum delivery that left me with injuries that took over a year to heal from. Luckily, he was the easiest, most laid back baby, who slept through the night by eight weeks and smiled, laughed, and cooed through his first year. When I became pregnant with my second, Lylah, I spent my entire pregnancy on a mission to prevent the traumatic delivery that I had experienced with Ben. I saw a pelvic floor physiotherapist every week for most of my pregnancy, along with a prenatal chiropractor and finished it all off with a psychologist who specialized in dealing traumatic births. I was thorough to say the least! I also chose to be followed by a midwife. I wanted a different experience, so I took a leap of faith.

And it worked--I had the most wonderful birth experience I could ask for. And although I only vaguely remember this, apparently right after she was born, I looked at my husband and midwives and said "okay; I think I'm done - I'm happy." We had a healthy boy and girl - the "million dollar family" as many people refer to it - and were complete.

Not only was my birth experience different from Ben's but so was the first year of her life. Lylah screamed from the moment she was born to about six and a half months of age. I was not prepared for this at all, because I assumed that I only had chilled-out, laid-back babies. Naively, I assumed that this had something to do with my and my husband's laid back parenting - we were calm, so our babies were too. Not so...Instead, I was promptly humbled when Lylah entered the world. I quickly learned that the nurture vs. nature theory wasn't as cut and dry as I thought. You just never know what you're going to get. I knew how lucky I was to have given birth to a healthy, beautiful baby girl, and tried to soak up every calm, happy moment with her in those first 6 months (although few and far between) and even stayed calm during most of the sleepless, relentless nights of her screaming for the first three months, but after that, I grew tired and weary.

The monthly trips to the children's hospital for her weeping diaper rashes, the bottles and bottles of Ovol and baby probiotics that we went through trying to calm her tummy, the hundreds of dollars we spent on lotions in hopes of managing her eczema and the elimination diets that I went on to be able to continue to nurse her... it all became too much. Although I was lucky enough not to experience post-partum depression, I'm sure I was close.

And then everything changed when she was about seven months old...for whatever amazing reason, her tummy calmed, her eczema became manageable and she started sleeping for more than two or three hours at a time. She was happy. And my husband and I were the most relieved we've ever been. Life became normal again, and both of us agreed - we were done.

Until Lylah was about 18 months old - that's when I really started questioning whether or not I was actually, truly done.

Logistically it didn't make sense to have another baby - our house, our vehicles, our lifestyle suited a family of four, not five, and Lylah's first six months were still etched in our memories. Why would we add more chaos to our lives? Why would we put ourselves through that again? The world is set up for families of four after all - having three kids would complicate our already busy lives.

But ultimately, it didn't matter - we both agreed that we wanted a big family and that we didn't feel "done" after all. Logistics aside, and although scared and unsure, we decided to entertain the idea. And within three weeks, it had happened. Although shocked and admittedly scared, we took our quick conception as a sign that indeed, it was meant to be. We also felt lucky to be able to become pregnant so quickly. We were going to be a family of five!

I have one month left in my pregnancy now, and it's been the most challenging of all (again- you never know what you're going to get!). Having a feisty and demanding two year-old and an emotionally-charged four year-old who tests every boundary is likely part of it. Add a busy work schedule, a kitchen renovation and transitioning Lylah over to Ben's room to make room for baby, has made for an exhausting few months.

I try not to complain too much (after all, these are all decisions that we have made), but over the past few weeks I've had moments of panic about having a third. What if we have another colicky baby? What if Ben and Lylah don't adjust well? What if this baby isn't healthy? What if the birth doesn't go as planned? Although we've already been through this twice, there are still so many unknowns, so many fears. Because this pregnancy has also gone by in a heartbeat (we're the busiest we've ever been), this 36th week has crept up fast. There has been little to no physiotherapy or chiropractic care, no nesting, and very little thought put into my birth plan or how I will manage with three kids.

And this is why I'm terrified.

But, when I see the smile on my son's face as he walks out of kindergarten, and his baby sister running up to him to give him a big hug; when my daughter gently grabs my face, tilts her head, smiles and says "Mommy;" when I see my amazing husband cuddling with both kids reading them bedtime stories; when my son, out of the blue, tells me "Mommy, you're a beautiful princess;" and when my daughter puts her head on my shoulder and strokes my hair before I put her to bed... those are the moments when I know we made the right decision. My kids fill my life with love, laughter, and joy. There will soon be more of that.

Yes, there will be more chaos, months of sleepless nights and many tears I'm sure. But I know that we will get through it, and love our baby more than anything. We will have those same beautiful moments with this baby that will make all of the challenges worth it.

Category:
Family - Babies
Tags:
having a third baby
how many kids should I have?
deciding to have another baby
birth stories