What You Might Not Know About Feeding Your Baby Solids 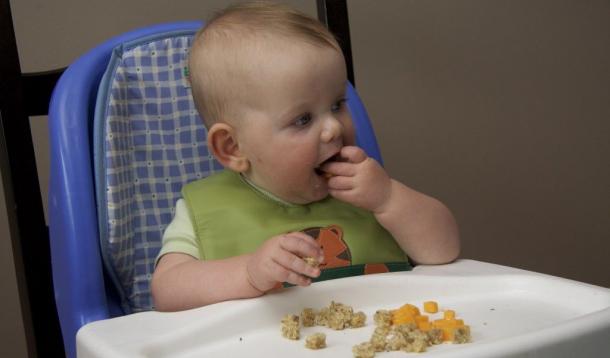 Introducing solids to your baby can be nerve-wracking and a bit overwhelming, especially when you're overloaded with conflicting information about what, when, and how to do it. You might be wondering if you should introduce iron-fortified rice cereal before six months of age to help your baby sleep through the night, or you may have read that purees aren't best and that finger foods are the way to go.

Ten Processed Foods This Dietitian Will Feed Her Kids

Luckily, in April 2014, Health Canada, The Canadian Pediatric Society, Dietitians of Canada and the Breastfeeding Committee of Canada, together released updated infant feeding guidelines. These new guidelines have taken into account the latest research on feeding infants and toddlers and provide parents and caregivers with easy-to-follow instructions on how to introduce their baby to solids in a safe and healthful way. But because new parents might not have the time to read through the entire set of guidelines, I've highlighted four fairly important points that everyone should be aware of before introducing solid foods.

1. Don't be afraid to skip purees

Because older babies quickly develop up and down jaw movements enabling them to "munch" (even without teeth) right from six months of age, it's not necessary to start with thinly pureed foods first (think infant cereal thinned out with breastmilk), like previously thought. In fact, there may be many benefits to starting with lumpy textures right from the get-go. Offering soft finger foods will encourage self-feeding (reaching out, grabbing and munching on food), which helps with oral motor development, and it allows babies to be in full control of how much and at what pace they eat, which will help with self-regulation of food intake later on.

Introducing Solids: Which Is Better? Baby-led Weaning or Spoon Feeding

Because of the important window for oral-motor development within the first few months of solid food introduction, it's important to expose your baby to a wide variety of textures by nine months, otherwise it could lead to feeding difficulties and lower intake of nutritious foods later in childhood. Always avoid choking hazards such as hard and/or stringy vegetables and fruits, small round-shaped foods such as grapes that aren't sliced lengthwise, sticky foods such as peanut butter (on it's own), gum, popcorn, marshmallows, whole nuts and seeds, fish with bones, and unsliced hot dogs or sausages. Between eight to 12 months, babies learn to move food towards their teeth through lateral tongue movement, which allows for chewing chopped foods and a greater variety of finger food textures.

Some parents experience a lot of anxiety when they see their baby gag on solid food and may even mistake it for actual choking. Know that gagging is a normal part of learning how to maneuver food in the mouth and is no cause for concern. Gagging or coughing are  protective mechanisms, which help to move food that is stuck at the back of the tongue or has fallen over the back before the swallow is triggered, to the front of the mouth again. As long as your baby is sitting upright and is attentive, the risk for choking is very minimal--about the same for adults.

Although you will begin to provide some structure around timing solid food feeds from six months onwards, your baby should guide whether, how much and at what pace she eats--this is why self feeding provides such an advantage. That being said, spoon-feeding can easily be baby-led as well. Being attentive to your baby's hunger and satiety cues will help with this. If you are spoon-feeding, make sure you're sitting facing your baby at eye level. Hold the spoon a few inches away from her mouth and always wait until she opens it before putting the spoon in her mouth. Go at her pace and stop when she's showing signs of fullness such as turning her head to the side, not opening her mouth, refusing to eat, playing with or throwing food. Although it might be hard relinquishing control over if and how much your baby eats, it's important that your baby is in charge. Try to feed her in a distraction-free environment (preferably in a high chair at the family table), encourage self-feeding as much as possible, maintain eye contact and positive verbal encouragement (not coercion such as using the "airplane" trick). Coercing or forcing your baby to eat solids will disrupt her natural hunger and fullness cues and interfere with self-regulation, which can lead to a negative relationship with food and poor eating habits long-term.

When your baby starts solid foods, you can also offer water in a cup. It can be confusing trying to figure out which type and brand of cup to use, with entire store aisles dedicated to sippy, straw and trainer cups. The best option: an open cup. If given the chance, babies learn how to drink water from an open cup easily and quickly. With help from mom or dad at first, babies learn to coordinate sucking action and keep their jaws stable as the open cup approaches. Eventually, babies will get the hang of it and be able to pace their sips which makes it easier for them to control breathing and swallowing. Using an open cup for older babies can also prevent prolonged bottle-feeding, something that is associated with over-consuming calories, potentially leading to unhealthy weight gain in childhood. Also, using sippy cups or bottles for water or other fluids requires "sucking", which doesn't support mature drinking skills and can interfere with oral-motor as well as speech development. When on-the-go, or when you're really trying to avoid a mess, using a straw cup provides a more developmentally-appropriate alternative to sippy cups.

Although historically parents were told to hold off the introduction of potentially allergenic foods such as peanuts, fish, eggs, wheat, strawberries, soy and dairy products such as yogurt and cheese until 9 months or older, we now know there is no evidence indicating that babies are at a higher risk of developing food allergies with early introduction of these foods. In fact, some of these foods, such as fish, eggs, iron-fortified infant wheat cereals, nuts and seeds are good sources iron, a nutrient that plays an important role in the health and development for older babies. You can rest assured that offering your baby these common food allergens (with the exception of fluid cow's milk) is safe right from 6 months of age, as long as you introduce one at a time and wait two days in between to make it easier to identify the cause of an allergenic reaction should it happen. Once a common allergen has been introduced, make sure that you continue exposing your baby to the particular food to maintain her tolerance of it. If there is a strong family history of food allergies, talk to your doctor prior to introducing allergenic foods.
When it comes to fluid cow's milk, it's recommended to wait until babies are between nine and 12 months of age (no earlier) for a couple of reasons. Cow's milk is low in iron and can displace iron-rich foods such as meats and alternatives. The calcium found in cow's milk also competes with iron for absorption in the body, potentially inhibiting enough iron absorption. The introduction of cow's milk too early (before nine months, but definitely before six months) can also put your baby at risk for gastrointestinal bleeding and increased blood loss in stool. Because over-consumption of cow's milk is common among babies and young children, I usually recommend parents hold off the introduction of cow's milk until 11 or 12 months of age. Offering milk in an open cup, too, can both help with avoiding excess consumption and decrease the risk of dental problems that might occur from sipping milk out of a bottle or sippy cup.

Starting solids should be fun, not confusing and stressful. Familiarizing yourself with the updated infant feeding guidelines will arm you with the knowledge you need to know to safely and healthfully introduce your baby to one of life's great pleasures--food!

Interested in learning more? Here is the number one most common feeding mistake that parents make, as well as the seven foods that this Dietitian won't feed her kids.
Come on over to my Facebook Page, where I post daily nutrition tips, resources, recipes and articles for parents.
Category:
Food - Nutrition
Tags:
starting solids
introducing solid foods to baby
baby-led weaning
sippy cups vs. straw cups
new infant feeding guidelines
how to start solids