Why You Should Teach Your Kids To "Eat In A Circle"

If your child belongs to the "eat only one thing on my plate club," this blog post is for you 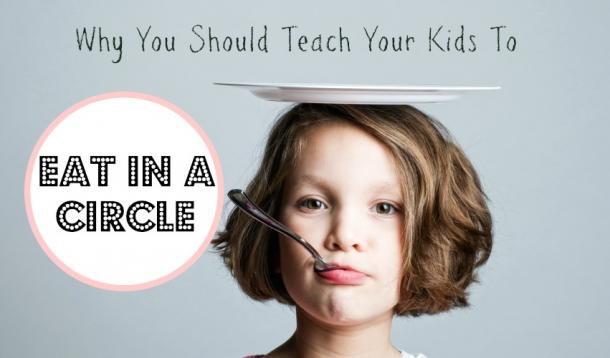 Does your child belong to the "eat one thing and one thing only on my plate club"? If it's a yes, you're not alone.

I recently received a question on my Facebook Fan Page from a Mom who was stumped on whether or not she should give in to her toddler's request for second helpings of his favourite food, when leaving the more nutrient-dense foods untouched on his plate:

"If you make a plate of food for your toddler and he only likes one thing, won't eat the others, and wants more of the yummy stuff, do you give it to him so that he at least eats SOMETHING or do you say, 'this is dinner, if you're hungry eat, if you're not, don't?' Are there other options?"

This is a dilemma that many parents face (including me). Kids eat foods that taste good and are pleasing to their palates (which in most cases, is starchy or sweet carbohydrate-rich foods), without taking into consideration the foods' nutritional benefits, or lack thereof. In other words, the pasta or bread may disappear quickly off of their plates (and they may ask for seconds), while the peas and grilled chicken are left untouched.

It's up to us, as parents, to relay the message that balance and variety are important when it comes to food, in a way that makes sense to young kids. Telling your child that a certain food is healthy, therefore, she needs to eat it, won't make sense to her, nor will it increase the likelihood of her eating it. Instead, I often coach parents to say something like, "We eat lots of different foods every day, because every food is good for us in a different way. So, it's important to taste a little bit of each food on our plate before we eat more of just one thing. If we fill our tummies with only our favourite food at dinner, we won't leave any room for the other foods."  Or something like that.

A tip that I often give parents (and use myself) is to tell their kids that they must "eat in a circle" before finishing ALL of one food or asking for seconds of only one food. For example, if your child only eats his bread and leaves his meat and vegetables, and then asks for more bread, you could say, "First of all, we're going to eat in a circle, which means you have to have one bite from each food around the entire plate. If you don't like it after you put it into your mouth, you can politely spit it out in your napkin." This takes the pressure off of everyone—your child will at least taste every food on his plate, but he does not have to commit to swallowing it if he doesn't like it. Often times, when my son tries a food that he thought he disliked or had previously rejected, he surprises himself (and me) and ends up gobbling it up. We know that our kids are ultimately responsible for whether and how much they eat at meal times, but "eating in a circle" gives them a safe opportunity to try foods without pressure to actually eat them.

Some kids prefer their foods not to touch each other, especially when it comes to favourite foods touching new or previously rejected foods (my son has been known to lose his mind when green veggies touch his noodles). In that case, separate new or unfamiliar foods and serve them on a "tester plate." In time, these foods will make their way onto your child's dinner plate once they are accepted and once the "my foods can't touch" phase has passed (which it will).

I encourage parents to always give their child a high five for trying a new or previously rejected food (regardless if the bite is swallowed or not). By doing this, you're not praising your child for eating, but rather for being brave and giving something new a try.

After your child has tasted around the circle, he should be allowed to have some more of the food that he loved (i.e. bread), if he is still hungry. There is a big difference between "short order cooking"(making your child his very own meal that is separate from the rest of the family, which is not a good idea) and allowing your child to have more of one particular food that you've served everyone (this is still in line with a healthy feeding relationship). It's important that we as parents and role-models are also "eating in a circle," showing our kids that even if we like one food more than another, we still taste all of the foods on our plate prior to finishing one particular food or having seconds of one food.

Another tip that I often give is to serve veggies prior to a meal—for example, bring out a platter with an assortment of raw veggies and dips before supper. Veggies tend to be the toughest sell with kids, so serving them alone prior to the rest of the meal, when kids are starting to get hungry, increases the chances of them eating some. The vegetables are no longer competing with the "yummier" foods on their dinner plate.

As parents, we want to give our kids a safe eating environment where they can try new or previously rejected foods without pressure or bribing (this will increase the chances of acceptance later on). And trust me, your child WILL accept a variety of foods in their own time.

If this was helpful, you may also find this post on what the Parent's Role In The Parent/Toddler Feeding Relationship is, as well as How To Manage Treat Foods In Your House

I also post daily nutrition tips and resources for parents (as well as answers to common nutrition questions) on my Facebook Fan Page. Feel free to check it out!