How To Fuel Young Athletes Before, During, And After Sport 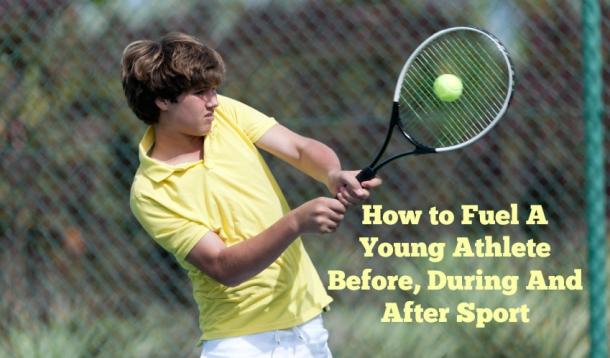 The nutritional needs of young competitive athletes are different from kids who do not participate in competitive sport. It's still important that these young athletes eat balanced, nutrient-rich diets most of the time to help with normal growth, development, and general health, but on long training or competition days, the priority shifts from nourishing to fueling. As mentioned in part one of this series on fueling young athletes, carbohydrates are their most important fuel source, and fluids are crucial to ensuring proper hydration.

Prior to training or competition:

Pre-exercise foods and fluids should provide sustainable energy for the upcoming training session or competition while preventing hunger and dehydration. As discussed in Part One of this series, carbohydrates are the most important fuel source for your young athlete and should take up about 45-65% of their overall diet. Water or in some cases sport drinks containing 6-8% carbohydrate and electrolytes such as sodium and potassium (i.e., Gatorade) are the best fluids before, during and after sport to stay hydrated. Recreational athletes or kids who do not participate in competitive sport should not consume sports drinks as they will contribute to excess calories and sugar, which could lead to unhealthy weight gain and dental carries. Energy drinks and other caffeinated beverages are not recommended for kids who participate in any sport (or any child for that matter).

Three to four hours before:

Every child is different in terms of what and how much food she can handle before training or competition, so it's important to experiment with various amounts and types of food during the training season so that your child is ready to go on competition days. Typically, three to four hours prior to training, your child will be able to handle a balanced meal or larger snack containing primarily carbohydrates, but also a bit of fibre, protein and fat for sustained energy. A few options are:

A smoothie is also a great way to hydrate before a big game or training session, otherwise, plenty of water to hydrate is important. Even three to four hours out, it's important that carbohydrates reign in your young athletes meal. Consuming too much fat and/or protein may lead to stomach upset during training or sport because these nutrients take longer to digest, and it may to lead to fewer available calories from carbohydrates, which means less energy for the activity.

One to two hours before:

What can be handled one to two hours before a training session will differ from one athlete to another depending on how quickly she digests food and what her stomach can handle. For instance, I can't eat much one to two hours before a run, but I have friends who can eat a full meal an hour before and be fine. Kids are the same way, so it's important that your child experiment with different foods and volumes of food during the training season so that she knows exactly what she can handle on competition day. Snacks containing mostly carbohydrates (low fibre) with a bit of protein and fat are typically more appropriate one to two hours prior to a exercise, rather than full meals. The goal at this point is to fuel and hydrate the body for the exercise ahead, not to squeeze another balanced nutrition-packed meal in. Fluids are also of top priority here. Water and/or commercial sports drinks with 6-8% carbohydrate are the best options. Here are some examples:

Here's where your child could sneak in a small boost of carbohydrate fuel as well as fluids for hydration in before her sport. A few bites of banana and some water, a few low-fibre crackers and some sips of sport drink or a low fibre low fat granola bar with some water would also work, depending again on what she can handle. It is important that whatever your child consumes is easy to digest. Some young athletes won't be able to handle any solid food at this point, so drinking diluted juice or a sport drink might be the way to go instead. Protein, fibre, and fat should be avoided this close to training or competing.

During training or competition:

Staying hydrated is the first priority during competition. If exercise lasts less than an hour, water is likely sufficient to stay hydrated. If it is hot and humid and your child is sweating a lot, a sport drink may be more appropriate to replace fluid and electrolyte losses. If exercise lasts longer than an hour, if your child is sweating a lot, and the activity is intense, a sport drink should be consumed instead of, or as well as water. If it is a competition day and your child has consecutive games back to back, small carbohydrate-rich and easily digested snacks in between games (such as fruit, crackers, granola bars, homemade cookies, fruit leathers, applesauce, a pita, a bagel, pretzels, trail mix, etc.) as well as plenty of fluids are recommended.

After training or competition:

Within an hour after exercise, the priority is to replace your child's muscle carbohydrate stores (glycogen) so that she is fueled for her next workout. Your child's muscles are like sponges right after exercise, soaking up any carbohydrate that is consumed. Protein is also important to help build and repair muscle tissue post-exercise. Within an hour of an intense training session or competition, it's important to have a snack that contains carbohydrates as well as protein. Here are some ideas:

Within two hours of training or competing, your child should have a meal containing a nice balance of fruits, veggies, meats and alternatives, dairy products and whole grains as well as fluids. This is where you can really maximize nutrition! If you need some recipe inspiration, here are my current top ten Dietitian-approved recipes.

I've decided to add a "Part Three" to this series to focus on all-day competitions and well as travel. Stay tuned!

These delicious and kid-friendly flourless peanut butter and banana muffins make a great post-workout snack, paired with some milk and fruit! And if you want your kids to eat healthier, get them involved in preparing meals! Here are 7 easy ways to include your kids in the kitchen!

Category:
Food - Nutrition
Tags:
fueling a young athlete
sports nutrition
what to eat before during and after sport
how to feed my athlete kid
oatmeal raisin cookie recipe
dietitian-approved recipes
how to get your child to eat more
hydrating for sport
how to make sure my child is properly hydrated
Sarah Remmer