The #1 Mistake Parents Make When It Comes To Feeding Kids 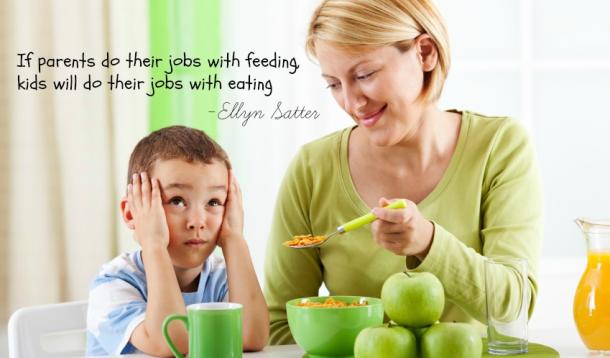 We all know that our kids require certain nutrients for proper growth and development, so when they refuse to eat, turn their nose up to new foods or request the same thing over and over and over again, we start to feel frustrated and defeated. We resort to techniques such as bribing ("if you eat three more bites of broccoli you can have dessert"), shaming ("your brother always eats his vegetables, so why can't you?!"), punishing ("no TV tonight for you because you didn't eat all of your dinner") or forcing ("you cannot get down from the table until you have had two more bites") which may act as short term solutions, but can negatively affect our kids' eating and nutrition long term. You are not a bad parent if you have reached the end of your rope and chosen the short term solution—you are actually a good parent. One who wants your child to reap the benefits of good nutrition now.

By doing this, though, you may be setting your child up for failure later on.

You are also trying to control something that you can't and shouldn't.

The biggest mistake that well-meaning parents make when it comes to feeding is trying to control if and how much their child eats. This is actually 100% the child's responsibility.

Do your job and let your child do theirs:

Child feeding expert, Ellyn Satter, created the "Division Of Responsibility Of Eating," which outlines the responsibilities of both parents and kids when it comes to eating. Parents are ultimately responsible for what kids eat, when kids eat and where kids eat. In other words, it is your job to provide nutritious, balanced meals and snacks at regular and appropriate intervals, in a designated, distraction-free (most of the time) area, such as the family table. Kids, on the other hand, are responsible for whether or not they eat and how much they eat. And I have to tell you, as a parent of a preschooler myself, one of the hardest parts of feeding is letting your child do their job. But once you do, your life will be a whole lot easier. The dinner table will no longer be a battlefield and the pressure will finally be lifted off everyone.

Mealtime CAN be positive and enjoyable.

Most of the time, picky eating is normal eating:

One of the most common ways toddlers and preschoolers assert their independence is through eating and food choices. Kids this age yearn for some sort of control over their lives, and eating is one way they do this. After the age of 2, growth starts to stabilize and kids come out of their "critical nutrition period," which means that their food intake (along with their appetite), slows a bit.

We can relax as parents, knowing that our children will likely receive enough nutrition over the period of a week, even though it seems as though they don't eat enough throughout one day. As kids approach the age 2, they typically become more selective with their food choices (asserting their independence) and parents often get discouraged that their previously stellar eater is now rejecting many foods. This is completely normal and doesn't mean that your child is a picky eater. In fact, as explained in Maryann Jacobsen, RD and Jill Castle, RD's book "Fearless Feeding" (I highly recommend this book by the way), children have more taste buds than adults do, making them much more sensitive to bitter compounds found in foods like vegetables (this is one of the reasons your child may suddenly reject vegetables).

Bitter compounds, in historical times, signalled "toxic" or "unsafe," so this could explain why kids often reject them. Children also have a biologically-driven affinity to sweeter foods, which may be a protective function as well (sweetness signals "energy-rich"). Although this preference for sweet foods and tendency to reject bitter foods such as vegetables is common among little ones, most kids learn to love a variety of foods in their own time, as long as we continue to introduce them in a non-pressured way.

You may notice that your child refuses to try a new or unfamiliar food by saying "I don't like that food, it's yucky" before ever tasting it.

A common reply might be "but you've never tried it before—how do you know that you don't like it? Take a bite."

The reluctance to try a new or unfamiliar food is called a food neophobia and although proven to be extremely frustrating for most parents, it is a fairly normal eating issue for kids (food neophobias seem to peak around the ages two and 6). Some research shows that food neophobias are genetically linked. One study looked at 66 pairs of twins between ages 4 and 7 years old, and found that genes explain over 70 percent of the variation in the tendency to avoid new foods. So if your kid is always the one who shies away from new foods while other kids seem more adventuresome, it could very well be a hereditary trait. Some researchers also believe that food neophobias (especially when it comes to bitter vegetables) stem from hunter-gatherer times, to protect people from poisonous or toxic substance (which also tend to be bitter-tasting). Kids judge food by its appearance, so if they know that one green vegetable was bitter tasting (which naturally doesn't appeal to most kids), they may turn their nose up to other green vegetables.

A trend that I'm noticing a lot lately is parents "hiding" vegetables in other foods. This sneaky trick may work short-term, but if it is done regularly, it is sending the wrong message to kids, who will eventually catch you and think "it's SO bad that she has to HIDE it?!" When it comes to food neophobias, your job as the parent is to continue re-introducing new or previously rejected healthy foods (up to 15-20 times), without pressure, knowing that your child will eventually learn to accept them in his own time.

One technique that I often use with my son is the "food experiment" where I say "why don't you put a tiny piece of that food in your mouth, and if you like it, you can chew and swallow in and if you don't like it, you can politely spit it out in your napkin." Sometimes he surprises himself (and me) by gobbling it up, and sometimes he cringes and spits it out. Either way, I give him a high five for trying and leave it at that. He's one step closer to eventually accepting it and that's all I can ask for.

Other tips that I often give parents of children who refuse new foods are:

- Always serve at least one food that you know he likes. This will make unfamiliar or unaccepted foods seem a little less "yucky" or scary.

- Keep reintroducing unaccepted foods in different forms. For example, instead of making baked yam like you usually do, make yam "fries" and serve with ketchup to make it more fun.

- Model healthy eating. Kids assume that what Mom and Dad do (and eat) is normal and healthy--they are watching you and will mimic actions that you take, such as eating healthy foods.

"Can I have yogurt and a banana...again?"

Another common eating issue with toddlers and preschoolers is the food jag, whereby a child requests the same food (or two foods) over and over again and refuses to eat anything else. It's important to know that this stage is very normal and may happen a times throughout childhood. As parents we cannot force our children to widen their palates during this finicky stage. And unfortunately, the easiest solution (giving in to your child's desire for the same food day after day) will only increase the severity and duration of the food jag.

Therefore, it's important to resist the urge to play "short-order cook" for your child and cater to his narrow palate and instead, continue to offer a variety of foods at meals and snacks (once in a while including his beloved food), leaving it up to him whether or not he eats it and how much he eats. The process of learning to accept and like a food can be tedious and tiresome but you will see that it is worth it in the long run.

Nurture intuitive eating rather than reliance on external feeding cues:

At around the age of three, children become more vulnerable to external eating cues, such as mom or dad telling them that they need to have "three more bites" or that they "should stop eating now," or a television commercial advertising hamburgers from McDonalds. Before the age of three, kids rely purely on their intuition when it comes to eating—they eat when they are hungry and stop when they are full.

As parents, we want to nurture intuitive eating by allowing them to choose if and how much they eat at a meal or snack, so that they continue to trust their body rather than relying on external and environmental cues. This, in turn, will lead to your child having a healthier relationship with food long-term.

If you found this helpful, you may also want to read about the 5 phrases you need to know to end mealtime battles for good as well as 7 ways to get your children to eat their school lunches. I also continually post free family nutrition resources and tips over on my Facebook page, so please feel free to check it out if you haven't already.