5 Phrases You Need To Know To End Mealtime Battles

Watch your mealtimes transform from dreadful to delightful 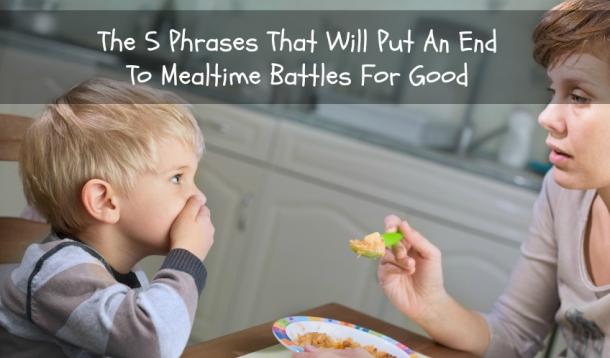 As a mom of a three-and-a-half-year-old, I am no stranger to mealtime battles. Although my son is a great eater for the most part, he is still a typical three-and-a-half-year-old, testing the boundaries at every turn and grasping at any opportunity for independence and control. Eating—something that we do multiple times a day—is, unfortunately one of the areas that preschoolers can and WILL control, and it can be beyond frustrating, and sometimes worrisome for us parents. We want to make sure that our kids are filling up on healthy foods and not eating too many "treat" foods. We want to make sure that they have enough energy for school and play and that they are getting all of the important nutrients that they need to grow and stay healthy.

Although mealtime battles seem to be an inescapable reality of parenthood, they don't need to be. As child nutrition expert Ellyn Satter teaches in her "Division Of Responsibility Of Eating" model, mealtimes do not have to turn into a battle ground, where there is a "winner" and a "loser." Eating can become much more enjoyable and less dreadful for everyone, and both parent and child can "win" if the communication before, during and after meals changes slightly.

Watch mealtime dynamics transform when you start using these 5 phrases:

Say this phrase instead of "Too bad, you have to eat—it's meal time!"

As Maryann Jacobsen explains in her Huffington Post article "End Mealtime Battles Forever With These 5 Simple Words," the phrase "you do not have to eat" is the most underused yet crucially important phrase parents should be using prior to mealtimes if kids refuse to come to the table. When preschoolers are deep in play, the last thing that they want to do is drop their toys immediately and run to the table for chicken and broccoli casserole. By taking the pressure off, and making mealtimes less about the food and more about family time ("you do not have to eat, BUT you do need to sit down at the table with the rest of the family"), your child will, 9 times out of 10, eat some (or all) of his meal once he sits up to the table. The rule in our family is that our son must sit at the table for at least 10 minutes before being excused. 5 minutes would be more appropriate for children under 3 years of age. Giving a 5 or 10 minute warning before meal time helps as well, so that they know ahead of time that playtime is ending soon.

"The kitchen is closing at __ o'clock:

Say this instead of "you better eat this now because you're not getting anything later."

As Ellyn Satter explains in her parent/child feeding model, parents are in charge of the whats, whens, and wheres of eating. Kids are in charge of whether and how much they eat. As the parent, you should be in charge of when meals and snacks take place. Otherwise, your house would turn into a food free-for-all and all-day snack-fest. My son often rushes through his meal, leaving more on his plate than in his tummy, because he is eager to return to whatever activity he was entrenched in before. Or because he knew that a yummy snack was coming later. Although kids are in charge of whether and how much they eat at meals, they do need warning as to when their next eating opportunity will be, otherwise, they may hold out for a snack later on. As a rule of thumb, in our family we offer a bedtime snack if dinner falls two hours or more before bedtime. If we have a later dinner, let's say an hour prior to bedtime, there is no snack offered, because dinner should provide enough food to fill tummies until breakfast the next morning. If my says that he is "done" his meal even if he's only eaten a little bit, I say "that is fine if you are done, but the kitchen will be closed after dinner and will not reopen until tomorrow morning, so you won't have another chance to eat until breakfast. Are you sure you want to be all done eating for today?" It may take a few days to adapt to this one if you've gotten into the routine of offering a bedtime snack every night regardless of dinner time or bed time.

"Why don't you try it, and if you don't like it, you can politely spit it out in your napkin":

Say this instead of "You must have 3 more bites before you're done."

The more you push your child into eating a certain food, the more you will turn your child off, increasing the "yuck" factor. Similarly, the more you withhold a food, the more appealing that food will become to your child, increasing the "yummy" factor. When you stay neutral with foods, keeping them on as level a playing field as possible, kids become more open to trying them and deciding for themselves whether they like them or not. Often, my son will take one look at an unfamiliar "healthy" food and say "I don't like that." My response is "You've never tried that before. Why don't you test it out by taking a bite, and if you still don't like it, you can politely spit it out in your napkin." 9 times out of 10, he will try it. Sometimes he is pleasantly surprised and says "Mmmm, I like this!" and other times he spits it out and says "yuck, I don't like that." My response is always "good for you for trying, buddy!" Whether he accepts it now, or accepts it later doesn't matter. What matters is that he doesn't feel pressure to eat it and he doesn't feel resentful because I forced him to eat it. As long as I continue to introduce it in a non-pressured way, he WILL accept it in his own time.

"Yes, you can have that treat":

Say this instead of "no, you can't have that treat."

Instead of saying "no" to your preschooler when they demand a treat at a random time—let's say before a meal—which would most likely escalate into a tantrum or yelling match, take a moment to pause, take a deep breath, and say "Sure! You can have a treat, but you get to choose when you have it. You get one treat today, so would you like to have it now, before dinner, or would you like to save it for after dinner instead? If you choose to have it now, you won't have any leftover for after dinner." Or something along those lines.

A while ago, my son came to me holding a Valentines Day chocolate that he found in the basement. He said excitedly "Mommy! Can I have this treat!!??" How I really wanted to reply was "Absolutely not! It's almost dinner time!" but instead, I suppressed my frustration and calmly replied by saying "Sure buddy, you can have the chocolate with your dinner or after dinner, but this will be your only treat for the rest of the day. You get to choose when you have it." I dodged a tantrum and it turns out that he ate half of his little chocolate alongside his dinner and saved the other half for the next day.

When kids feel as though they CAN'T have something, they become frantic about having it NOW and ultimately, a breakdown ensues. But when you give them structured choice—"you can have this, but it will be under ___ and ___ conditions. You choose," the treat becomes a little less desired and because they know that ultimately they CAN have it (or a portion of it), the urgency seems to subside.

"For snack, you can have this with this or that with that. You get to choose."

Say this instead of "what would you like for snack?"

Even though, as parents, we are ultimately in charge of what our kids eat, handing over a little bit of control can go a long way. Kids are more likely to eat something if they feel as though they have some control over it. Giving your child structured choice by saying "for snack, you can have an apple with peanut butter OR an orange with yogurt," you are still in control of what your child will eat, but they feel as though they have decided. It is a win-win. Where battles begin is when parents say "this is what you're having for snack, end of story!" (cue tantrum) or "what do you want for snack" (food free-for-all).

Why You Shouldn't Bribe Your Kids With Food

Category:
Food - Nutrition
Tags:
mealtime battles
how to end mealtime battles
Picky eating
what to do when your kid won't eat
food refusal
preschooler refusing food
child eating too many treats
what not to say to your kids about food
bribing kids with food

Sarah Remmer: The Non-Diet Dietitian 5 Things You Should Never Say to Your Kids About Food