Being "Skinny Fat": Why Your Health Is At Risk

Why being naturally skinny can be a silent killer 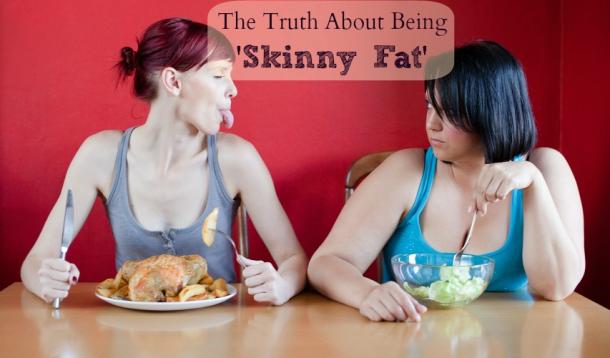 We all have friends or family members who are naturally thin, eat whatever they want, and never exercise.

We may be jealous of their slim silhouettes, but in reality, these people may be at a high risk of developing chronic diseases such as Heart Disease, Cancer, Diabetes Type 2, high blood pressure and Metabolic Syndrome.

The risk stems back to the presence of "visceral fat"—fat that builds up around the organs such as the heart, liver and kidneys. In a culture that is so deeply obsessed with weight, it's no wonder we assume that skinny translates into healthy, but the truth is, it doesn't at all. Because we don't notice visceral fat the same way that we notice subcutaneous fat (fat under the skin), being "skinny-fat" can be a silent killer.

Unfortunately, many people don't realize that they are at risk of chronic disease, such as Diabetes, until they are showing symptoms, especially when it comes to people who are naturally thin. If you haven't ever had to watch your weight or exercise to maintain a slim physique, there's a good chance that diet and exercise aren't at the top of your priority list (of course there are always exceptions here).

That's why it's so important for all of us to be aware of our family's medical history, see our doctor yearly for a complete physical and make our health a priority by staying active and eating a balanced diet.

My husband is one of those people who doesn't need to work too hard to stay slim. He doesn't carry a lot of subcutaneous fat. Although I've always envied this about him, I'm also well aware that his father (as well as his uncle and late grandfather) has Type 2 Diabetes and possesses the same slim build. This scares me—knowing that my husband could very well suffer the same fate. Luckily, he has a Nutritionist as a wife and we stay active as a family, so hopefully this greatly decreases his risk.

We've finally embraced the idea that being "fit and fat" is possible—that those who are overweight, but active and follow a healthy diet, can be perfectly healthy and at low risk of chronic disease—but we have yet to embrace the flip side of that. It's important to remember that even if you are naturally slim, it doesn't automatically mean that you have a clean bill of health. If you follow an unhealthy lifestyle by being inactive and eating unhealthy foods most of the time, you are likely carrying a large amount of this visceral fat around your organs that could one day kill you.

You may also be interested to read about how poor body image can be passed down through generations and about how many overweight teens are at a high risk of developing Eating Disorders.