Freekeh: Why This "Supergrain" Is Taking The World By Storm

Why I'm freaking out about Freekeh 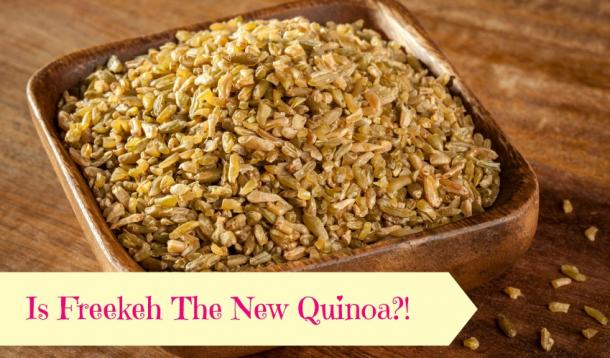 Move over quinoa, because a new hot supergrain is about to take the spotlight in the nutrition and food world. Freekeh (pronounced "free-ka") is red hot right now, and for good reason. I had never heard of it until one of my fellow Yummy Mummies mentioned it. I then did some research and found out quickly that eating this ancient grain—touted for its many health benefits—is a nutritional trend worth following.

The word "Freekeh" is derived from the Arabic word "al-freek" which means "what is rubbed," referring to how they rub the grain to rid it of its shell. Native to Lebanon, Syria, Jordan and Egypt, Freekeh is a type of durum wheat that is harvested young (when it is still "green") and when the grains are still moist, "milky" and soft. Small piles of these grains are dried in the sun and then set ablaze—yep, set on fire—so that the chaff and straw burn off. The fire is controlled carefully though, so that the precious seeds do not burn, but rather roast to perfection. The grains are then dried in the sun further, polished and cracked before they are sold. Because this type of wheat grain is harvested when it is so young, it boasts a plethora of health benefits that mature wheat and other common whole grains can't compete with.

Unfortunately, Freekeh isn't widely available yet in Canada. But you can find it in a few major grocery stores down the ethnic or specialty food aisles, certain health food stores, as well as specialty Middle Eastern and Mediterranean food stores. I highly recommending doing some research in your city or town to find a stash of these healthy, delicious smoky-flavoured grains though—it's well worth the effort. Greenwheat Freekeh, an Australian company, is leading the industry when it comes to both research and development of modern processing technologies for Freekeh. In fact, this company is the first and only in the world to develop technology to harvest this soft young wheat grain.

Here are just a few reasons why Freekeh has won me over from a nutritional standpoint:

Some claim that Freekeh is safe for those who need to avoid gluten (i.e., those who have Celiac Disease), but the truth is, Freekeh is NOT a gluten-free grain (it's a form of wheat after all). There may be something unique about the immaturity of the wheat grain and the way that the grains are roasted (the roasting may "denature" the gluten) that may rendor it safe for those who avoid gluten. But until there is more research done, it's best to play it safe and avoid it if you follow a gluten-free diet.

How to prepare it on the stove top:

And speaking of food fads, check out these hot nutrition and food trends for 2014.

And if you're thinking about trying Freekeh for breakfast, read here about why eating breakfast will make your life way better.

Sarah Remmer: The Non-Diet Dietitian Six Foods That Will Help Your Child Concentrate