Can Kids Become Smarter By Playing With Their Food? 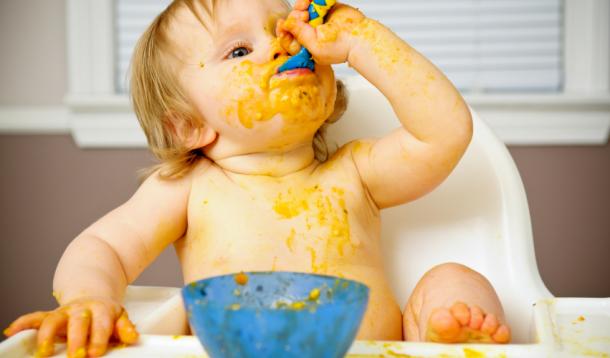 If your home is anything like mine, meal times are chaotic. We try to have family meals most nights, with our baby in her bouncy chair in the middle of the table (so that she's part of the action) and our three year old in his red "big boy chair" which, admittedly, is a glorified high chair that attaches to our table—it keeps him somewhat contained, otherwise, he'd be up and down a zillion times during our meal.

My son's "big boy chair" needs to be washed almost every night because it is covered in food, much like his clothes, the table, the floor and sometimes the walls. Unless he throws his food (which, for me is unacceptable), I've always encouraged (or, I guess, not "discouraged") my son to play with and explore his food. Stacking, smushing, feeling, and squishing was his way of getting to know and becoming comfortable with new foods. Once he had a chance to familiarize himself with it, he usually became fairly accepting of it (whether there is a connection or not, I don't know). I admit- there were (and still are) nights when I just wish he was a bit of a "neater" eater, because who wants to scrub the walls, floors and chairs after a long day? But according to this study out of the University of Iowa, messy mealtimes may actually have long-term benefits.

In a study out of the journal of Developmental Science, researchers observed a group of 16-month old toddlers who ate while sitting in a highchair or at the table. What they found was that the children who ate in highchairs, were able to learn the names of non-solid foods and other objects better than those who sat at the table (in chairs I'm assuming). More importantly, those children who explored and played with their food (as opposed to those who didn't) were more likely to correctly identify specific non-solid foods (such as applesauce) when shown in various shapes and sizes. Apparently, according to the researchers of this study, non-solid foods are generally harder to identify for kids because they don't have a consistent shape.

This study not only highlights the fact that kids are highly influenced by the context of their everyday activities (like meal times in a highchair), but also the fact that messy eating is our kids' way of becoming familiar with their food and being able to identify what they're consuming. As a dietitian who specializes in babies and kids, I find this study fascinating, and as a mom, encouraging. Perhaps there is now concrete evidence to support that the hours spent cleaning up after mealtimes have not been wasted!