I'm Becoming A "Fooditarian" This Fall

Instead of dieting (which is not an option), I'm ditching some unhealthy habits and creating healthier ones 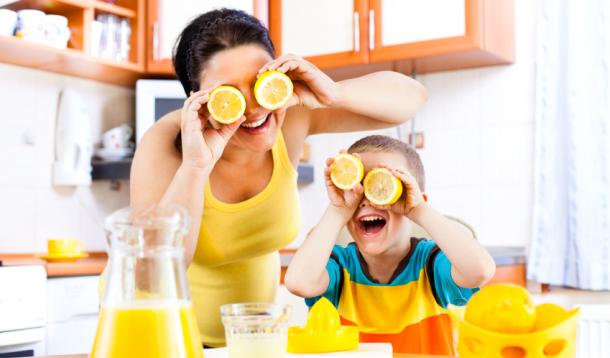 I love Fall. It's by far my favourite season, not only because of the beautiful colours, the warm days and the crisp, cool nights, but also because I always feel motivated to "start fresh" and tackle a new project or personal goal.

While most people consider Summer to be blissful, I find true bliss when Fall arrives.

Because I just had my second baby and I've taken on the new role of stay-at-home-Mom, most of my time and energy is devoted to keeping my family happy and healthy. Because of this, I have been thinking a lot about the food that we eat. I've realized that even though I've earned a degree in Nutritional Science, I've counselled hundreds of people on their nutritional habits and I write about nutrition all of the time, my nutritional habits are not perfect, nor will they ever be (that's unrealistic). But something that has been bothering me for a while now is the amount of processed/packaged food that enters our house. It's hard to avoid these foods to be honest—they are everywhere. Products like boxed cereal, granola bars, crackers, pop, candy, packaged baked goods, pre-made frozen meals, deli meats, canned soups, toddler fruit snacks, sauces, seasonings etc. have all been processed in one way or another and really shouldn't be considered... food. In my mind, real food is what comes from nature—whole foods like fruits, vegetables, intact grains, meats, eggs, dairy, poultry, fish, legumes, nuts, and seeds. And to be honest, these are the foods—in their purest form—that I love the most.

So why the need for all of this fake food?

Convenience? Habit? It's probably a combination of the two. And this is why I've decided to change a few of my eating habits.

As most of you probably know, from the title of my blog, I'm not a fan of diets. I consider any sort of rigid eating plan where someone feels restricted or deprived, a diet. So even though I know that most processed foods are unhealthy, I also know that diets don't work. In fact, research shows that restrictive diets can actually lead to weight gain over time. So dieting would never be an option for me, nor would I ever recommend it to anyone who wants to improve their health and/or lose weight. But, getting rid of a few unhealthy eating habits and replacing them with healthier ones is a great way to improve health and reach a weight loss goal realistically and sustainably. So, instead of giving up entire food groups to lose weight (which we all know doesn't work long term), exchange bad habits for a better habits. If you are breathing a sigh of relief, read on...

To create healthier eating habits, it is important to follow these steps first:

Get your family on board: When you're creating new habits and ditching old ones, especially when it involves food, everyone's got to be on board. If you have young kids like I do, you've got to make sure that your partner is on board. And if you have older kids, they've got to be on board too. I talked to my husband about my concerns and we decided together which habits we would work on, what he was willing to change and what he was not willing to change. Because we often eat as a family and I do the grocery shopping for all of us, I needed my husbands support before I could go ahead and make changes.

Get organized: In order to create healthier eating habits, you've got to plan ahead. If you always have cereal for breakfast but now want to get rid of it, you've got to have at least three or four healthier breakfast alternatives to replace it with. Or, if you never eat breakfast and want to start, you've got to budget your time differently in the morning so that you have time to eat. Doing a bit of meal planning is key, so that when you go to the grocery store, you're not tempted to buy what you always buy week after week. By planning your weekly meals and writing a grocery list, you'll know exactly what you need to buy and will be less tempted to gravitate to the same old stuff. If you know that you want to eat less white, starchy carbohydrate foods, find some new recipes using whole grains like quinoa, wheat berries, barley or experiment with starchy legumes like beans and lentils. If you want to go organic, research where in your city has the best and most affordable organic foods or whether there is an organic grocery delivery nearby.

Pick and choose: I am famous for having big, lofty goals and then being disappointed when I am not successful at reaching them. This is why it is SO important to be realistic in your habit changes. If there is something that you absolutely are not willing to give up (for me, this would be cream in my coffee), do not attempt to give it up. I would last about one day putting milk in my coffee. On the other hand, I would definitely be able to give up my breakfast cereal if I had a quick and easy breakfast alternative like oatmeal or a smoothie. I'm willing to take an extra couple of minutes to make a healthier, less processed breakfast choice, so that is one of the changes that I'm working on. Another one is changing from flavoured yogurt to plain yogurt (and adding fruit for flavour instead). This was a realistic, but worthwhile habit change for me. Remember, your family has to be on board too. Choose no more than three goals or habit changes at one time (one or two is better) so that you don't feel overwhelmed or discouraged.

Control your environment: There's no sense in planning to give up diet coke, but keeping a stash of them in your fridge just in case someone comes over who likes diet coke. The temptation will override your will power every time you open the fridge. If you have it in the house, in your car, at your desk, in your purse etc. you will constantly have to use will power to resist it. Instead, control your environment so that you don't have to rely on your will power day after day. Get rid of foods or drinks that you would like to stop consuming and replace them with foods that you would like to start eating. For example, if you're wanting to eat less crackers or chips, you will need stop buying these foods and have alternative snack options (such as homemade trail mix or cut up veggies and hummus) on hand that are satisfying and tasty. If you want to stop drinking diet coke, you'll have to have a tasty alternative, such as lemon or cucumber-infused water, ready to drink in the fridge. Or if you want to stop grabbing a Starbucks banana loaf everyday after work, you'll have to plan out a different route home.

Give yourself a week: I find that it takes me at least 7 days (more like 10-14) to ditch an old habit and create a new one. A while back, I started using a lunch size plate for dinner. It took me about a week of consciously choosing the smaller plate over the larger one and since then, I haven't used a large plate once. It's taken me about one week to consciously prepare two different vegetable sides at dinner instead of one, but I'm slowly starting to get into the habit of doing this. If you are wanting to stop eating chips in front of the TV, it will take you at least one week to watch TV without having a chip bag on your lap (and likely getting rid of the chips all together) and perhaps making a cup of tea instead. It will eventually become second nature.

For me, becoming more of a "Fooditarian" by slowly cutting back on packaged, processed foods (not eliminating them all together—c'mon now) and replacing them with real whole foods is not only realistic, but it's also exciting. I will become more creative in the kitchen, I will feel better about what I am feeding my family and I will no doubt lose this last 10 pounds of baby weight as a bonus.

Even though Summer is over, find some bliss this Fall by ditching your diet plans and instead, creating healthier eating habits that are realistic and rewarding.