The Soy Controversy: Is It Safe To Eat?

From breast cancer risk to whether or not its safe during pregnancy. Your questions answered about soy. 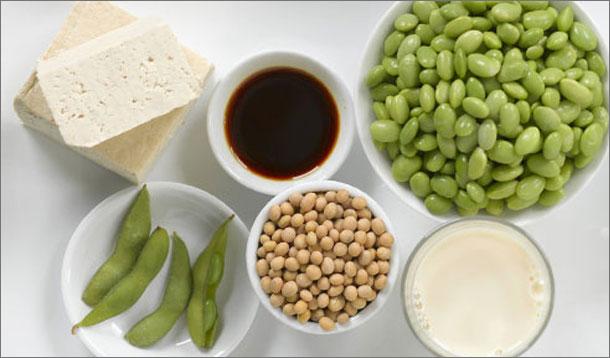 I can't tell you how many times I've been asked about the safety of soy foods in the past several years, especially more recently. It seems like everyone is confused about whether or not soy is still a healthy option. And it's not surprising considering all of the negative press that soy is getting. Women frequently tell me that they've heard that consuming soy can increase their risk of breast cancer, so they shy away from it. I've even had men ask me if they will start to grow breasts if they eat too much soy! And the soy controversy doesn't end there. There have also been claims that soy foods can hinder male fertility, and can cause thyroid issues. Since the 1970s, soy foods have gone from a niche "vegetarian" food, to a multi-million dollar industry. Soy now can be found as a popular milk alternative (soy milk, soy yogurt etc.), as an ingredient in breakfast cereals to boost the protein content, as a meat-alternative in foods like veggie burgers and as a filler in many other food products. It is because of this huge increase in soy consumption in North America that a more in-depth evaluation of soy's health effects is happening.

Soy is a great source of protein (one of the only "complete" protein sources coming from plants), polyunsaturated fats (such as Omega 3) and isoflavones (phytoestrogens). It is the isoflavone content of soy foods that has caused so much controversy. Because isoflavones have estrogen-like properties, the question has been raised as to whether soy poses a health risk.

Asian cultures rely heavily on soy foods and consume approximately 7-30 grams of it per day depending on the Asian country. In North America, we consume less much less on average (about 1 gram per day on average) unless we follow a vegan lifestyle (Vegans usually rely more heavily on soy foods). Many studies have suggested that consuming soy foods has health benefits such as decreasing the risk of heart disease, certain cancers, Osteoporosis, Diabetes Type 2 and symptoms of menopause. Most of these findings, however, are inconclusive. Surprise surprise.

A big concern is that soy may do more harm than good for women with estrogen-sensitive cancers, such as breast cancer. In some animal studies, it has been shown that soy isoflavones can have growth-promoting effects on cancer cells, especially highly processed forms of soy. However, it just so happens that soy isoflavones act differently in mice and rats than in humans (makes sense), therefore, the findings are not necessarily applicable to women. What's more is that there have been no clinical human studies done to prove that soy increases the risk of breast cancer or recurrence of breast tumors. While isoflavones may have estrogen-mimicking properties, they can also block the more estrogen from binding to the estrogen receptor, according to The American Cancer Society. Soy also has anti-oxidant and anti-inflammatory effects that can help to reduce the risk of cancer. Including soy in your daily routine may even help to prevent breast cancer from ever occuring, according to researchers at the University of Southern California, who compared women who consumed an average of 1 cup of soy milk or tofu per day with women who did not consume any. However, as usual, the findings are still inconclusive.

As a part of a healthy diet, whole soy foods are generally considered safe for pregnant and breastfeeding women. Yay! This is good news for me, because I'm pregnant and drink soymilk daily due to a lactose intolerance (and I really like the the taste). What isn't surprising though is that it is unclear whether high doses (much exceeding that of a normal Asian diet) of soy and soy isoflavones are safe during pregnancy because human studies are limited. So bottom line: don't munch on tofu all day, every day. Also, I usually suggest that pregnant women stay away from soy supplements (like soy protein powder) during pregnancy because they are often unregulated.

It is known that isoflavones from soy are transferred to breast milk from mothers and one study showed that high doses of isoflavones given to pregnant animals resulted in tumors and reproductive changes in their offspring, although, again, this has not yet been tested in humans. Another study found that male babies born from mothers who drank soy milk while pregnant, had more frequent occurrence of hypospadias (a birth defect where the urethra is positioned on the underside of the penis). Research also shows that kids who are fed soy formula (versus breastmilk or cow's milk formula) in the first year of life may have a significantly lower bone density than other kids. This is why parents considering the use of soy formula should speak with a Pediatric Registered Dietitian to make sure the appropriate vitamins and minerals are provided in the formula or supplemented. On a positive note, most human and animal studies that have examined males or females fed soy formula as infants, and have not found abnormalities in infant growth, head circumference, height, weight, occurrence of puberty, menstruation, or reproductive ability.

Relax guys. You will not turn into a woman if you consume soy. I promise. A recent meta-analysis in the Medical Journal Fertility and Sterility concluded that consumption of isoflavone-rich soy foods does not negatively impact circulating testosterone or estrogen levels in men, erectile function, sperm/semen quality or quantity or... breast size. So ladies... let your husbands and partners know that they can rest easy knowing that enjoying moderate amounts of soy (what would be typical in the North American or even Asian diet) is completely safe.

For many years, we thought that soy protein had a significant cholesterol-lowering effect as shown in some studies, which therefore would suggest that soy decreased the risk of cardiovascular disease. More recently though, experts suggest that because the data is so limited and inconsistent, it is not fair to say that soy protein has a significant role in heart disease prevention. It is still safe to say though, that consumption of soy may act as one way, although likely modest, to decrease heart disease disease risk. My take on this: if you're replacing a fatty piece of processed meat with grilled tofu, you're likely doing your heart (and health) some good.

Bone health: The isoflavones in soy foods may also decrease the risk of Osteoporosis and hip fractures. Soy milk is almost always fortified with Calcium and Vitamin D, which can also help to prevent Osteoporosis.

Menopause: There is some evidence that soy can also help alleviate hot flashes in menopausal women.

With exception of allergic reactions, there is no evidence to suggest that whole soy foods exert any negative effects on healthy individuals who consume soy in amounts consistent with Asian intake. I recommend that most people continue to enjoy WHOLE soy foods or fermented soy foods (soybeans, soy milk made with whole soybeans, tofu, tempeh, miso etc.) in moderation, meaning in similar amounts to that in the North American or even the Asian diet (about 1-2 servings per day). Soybeans are a great source of protein, fibre, omega 3's, anti-oxidants, vitamins and minerals and can safely fit into a balanced healthy diet. If you fall under the higher risk groups that I've mentioned above, I would avoid high doses of soy foods and especially soy supplements with high concentrations of isoflavones, as the data is limited in regards to safety. I also suggest buying organic soy foods when possible, because many conventional soy products may come from genetically modified soybeans and may contain high levels of pesticides/fertilizers.