Three reasons why this Canadian conference is my favourite 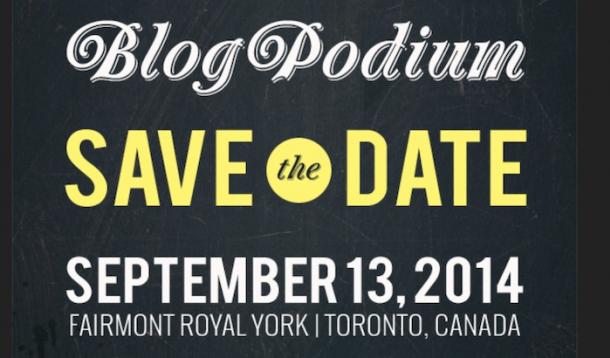 BlogPodium is my favourite conference. It's my happy place. When I walk in and look around, I see these people are my people. They understand my love of pretty, my passion to create and they feel it too. This year, I am tickled pink to be an ambassador along with the super talented Alex, Virginia, and Melissa.

I have many reasons for attending each and every year, but these are the top three reasons I go every time...and why you should join me. 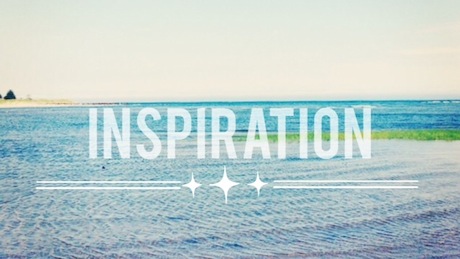 From the speakers, to the decor, BlogPodium offers inspiration at every turn. With topics including photography tips to google analytics, the sessions offer real advice you can apply to your blog. Be prepared to take notes! And lots of photos.

BlogPodium provides the chance to get up close and personal with amazing design brands, which can then lead to creative collaborations. I love the chance to connect with companies and meet the people behind the scenes. Come ready with questions and ideas for how you could work with a brand. They are there to develop relationships too. 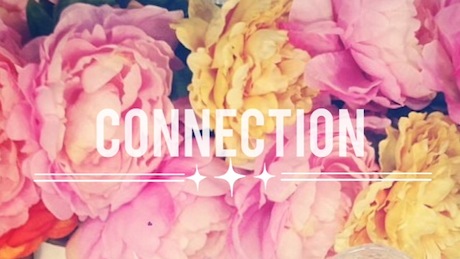 One of the best reasons to attend each year is the opportunity to connect with friends, old and new. I meet new people each time that inspire me to be a better blogger and I reconnect with long time bloggy friends. My advice: go right up to your biggest blog crush and introduce yourself, jump into conversations, ask questions, learn and laugh. You won't regret it.

If you see me, come say hi....I'll be the one laughing really loudly, probably wearing something floral, with heels I will hate myself for half way through the day. 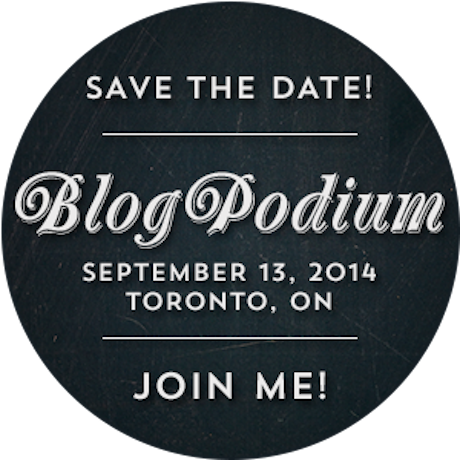 PBteen has it all: good quality and stylish and fun selection

People often ask me where I source decor for tween and teen rooms. The answer is almost always PBteen. The quality is excellent and the colour and selection is stylish and fun. They frequently launch new collections, many of which co-ordinate, making it easy to put an entire look together, without looking too matchy-matchy. I am (and always have been) a preppy gal, so the esthetic is one I am drawn to time and again.

I put together a couple of my favourite looks. You can shop each room by clicking the links below each design board.

This look works for a beach-summer-colour loving teen or tween: 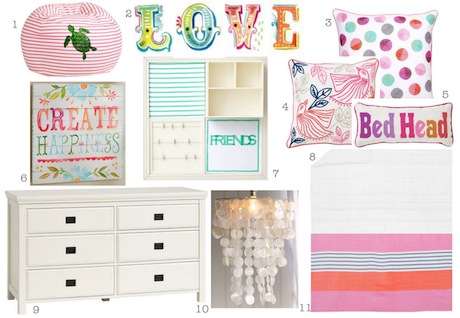 I absolutely love the collaboration PBteen recently did with Emily + Meritt...so much pretty! I put this look blush, black and white look together using many of their pieces. And I have to say, I kinda want this room for myself. 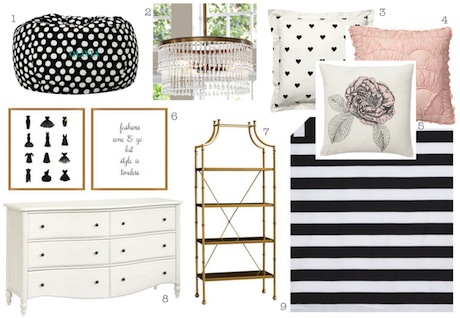 Two totally different looks from one great source. PBteen ships to Canada too, which I love. And no, they did not ask/pay me to write this post; I just love sharing when I know a good thing.

If you want a room your teen or tween would like totally super love, I do offer interior design services in the GTA, and e-design for long-distance room makeovers. Email [email protected] for details.

May The Force be with you 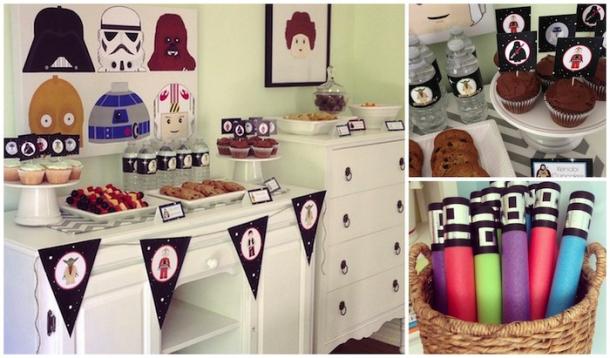 My boys' birthdays are three weeks apart, one at the end of June and one in early July—one of the busiest possible times of year to plan a party. Luckily, they are young enough that they are happy to have a joint one. I had vowed never to have a home birthday party again, but they both wanted a Star Wars theme, which I hoped would be easy to host at home. 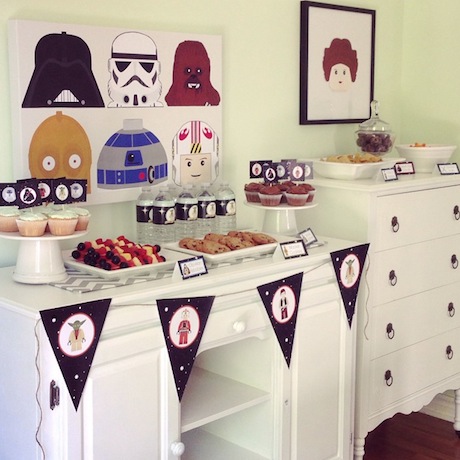 When decorating for the party, I focused on the one room in our house that the kids would spend the most time in—the dining room. I found these adorable printables from Party Posh Printables on Etsy and used them to create a piece of canvas art to hang over the buffet. All I had to do was print the images, cut them out, and Mod Podge them to the canvas. Easy, it was. 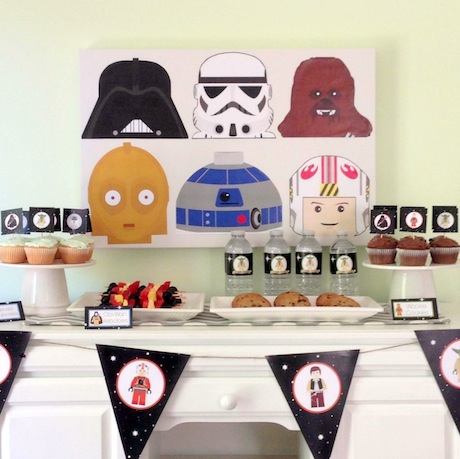 I then hung the banner across the front of the buffet and used the other printables to complete the look. The great thing about Etsy stores is that they are often able to customize items for you. I sent along the food names to Party Posh Printables and had them printed on their cards for a small fee. We had so much fun coming up with food names, like Obi-Wan Kebobies and Death Star Donuts. 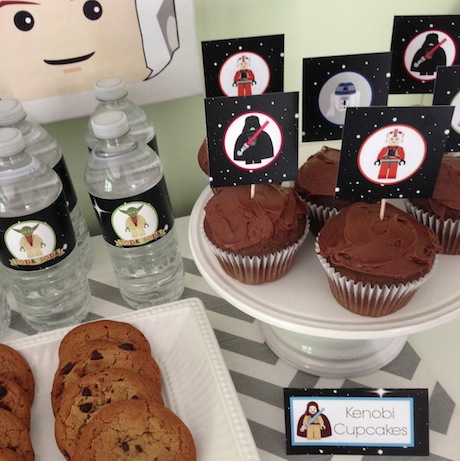 I had a couple of extra faces, so I taped them over art I already had in the dining room. 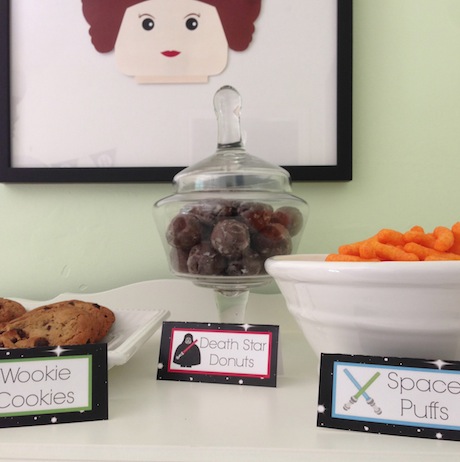 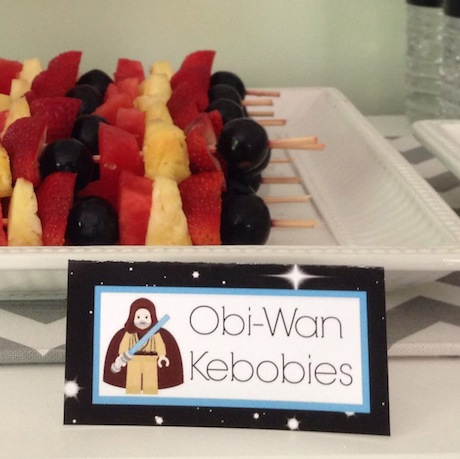 Instead of loot bags, each child received a small Star Wars Lego set and a foam lightsaber. Again, these were so simple to make—cut a pool noodle into three equal pieces, wrap one end of each piece with duct tape and use a narrow roll of black tape to add the details. The boys loved helping make them. When everyone arrived at the party, I called them all together and told them that our backyard had been invaded by Storm Troopers. Each young Jedi grabbed a lightsaber and went out to battle the Troopers, which were white balloons hanging from a tree. It was hilarious! I had actually dreaded hosting a home party after I did one a few years ago. This time was so much easier. I think the key is to choose a popular theme so you can purchase some of the decor, rather than make it all yourself, which is what I had done the last time. Also, the fact that the boys are a little older made it much easier to keep everyone on track. 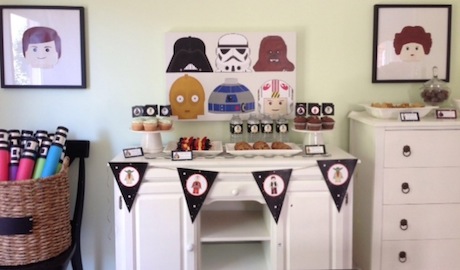 Another reason (the main reason if you ask the kids) the party was a huge success was because of Creative Club Inc. They came to our house and ran an hour-long Star Wars Lego activity with the kids. They supply the Lego (in a variety of themes), and the children worked in pairs to build a space station. The absolute cutest part was when each group presented their creation. So adorable. 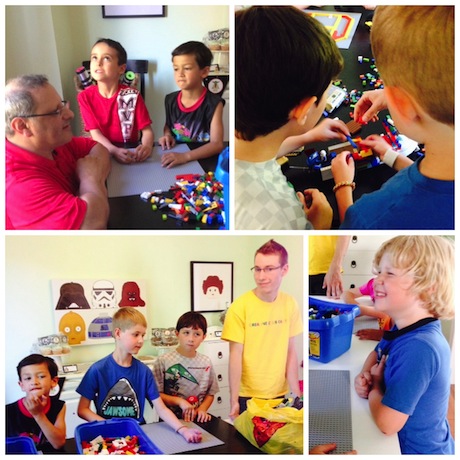 One thing I do for the boys every year is make them a mini birthday cake of their choice. In keeping with the Star Wars theme, my youngest wanted Luke Skywalker's lightsaber. And, well, it was quite.....ummmm.....something. See for yourself: I have yet to make the Yoda head my older son wants. You can get a peek of that soon if you pop over to my Instagram account.

I am already excited for next year's DIY home party for the boys. And I am pretty sure I am going to add party styling to my job description....it was way too much fun!

Sarah Gunn: Wall Candy Home Is Where Your Heart Is

Sarah Gunn: Wall Candy How to Organize Your Minivan So It's Functional and Stylish