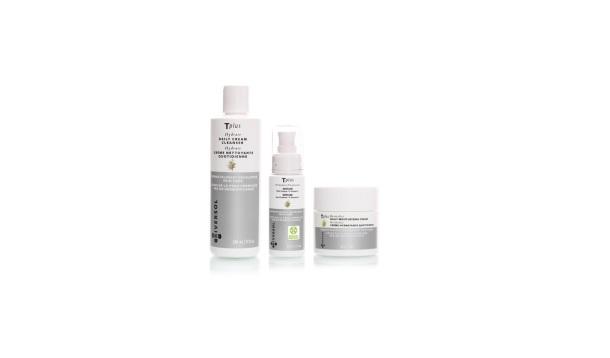 Growing up a fair-skinned blonde meant slathering on plenty of sunscreen and wearing lots of wide-brimmed hats. But despite protecting myself from the harsh rays of the sun, in my late teens I noticed a distinct and perpetual red flush along my nose and cheeks.

This condition, called rosacea, is genetic and is fairly common in those with fair and sensitive skin. While there are triggers (sun, stress, alcohol, spicy foods, humidity and some skin care products) that can make the condition flare up, the flare ups have happened despite my best attempts at minimizing them. Some mornings, after washing my face gently with cool water, my nose and cheeks would look literally painted red.

A few years ago I began searching for a solution in earnest. I read about demodex mites on the skin, and how special soaps could help kill these little buggers and solve my skin problem. Unfortunately, the various bar soaps and creams didn’t help. I tried ProActiv, which my husband swears by, but it was far too harsh for my skin and made the redness even more pronounced.

On the recommendation of my dermatologist, I tried Intense Pulsed Light. At a cost of $180 per treatment, it wasn’t cheap. After the recommended four treatments, I definitely saw a significant difference—the redness was reduced quite a bit. However, the redness that remained was still frustrating for someone who doesn’t want to be obsessed with applying layers of foundation I’d too often rub off.

Then I stumbled upon Riversol’s Facebook page. Founded by a dermatologist and run out of British Columbia, it’s a line of skin care products based around thujaplicin, an ingredient derived from the Pacific Red Cedar tree.

When I contacted the company, Riversol offered to send me a kit to try, and, if I liked it, one to give away to readers. I accepted the kit, but waited to confirm the giveaway. I wanted to ensure the product worked before giving one away or posting any sort of review. After all, it’s not an inexpensive solution (see below). When I received the kit, I was excited to try it. I was scheduled to start a new job a month later, and was hoping I could avoid ever hearing, “Did you get a sunburn this weekend?” as I have in the past.

I started the three-stepskin care regime using just the cleanser and moisturizing cream steps for the first two weeks, as recommended, then added the serum later. Within three weeks the lingering redness was completely gone.

The change has been so noticeable that I now regularly leave the house with NO MAKEUP on. This is a dramatic life change for me. Before Riversol, I would occasionally forget to check my foundation before leaving the house, only to be embarrassed by store clerks staring at my Rudolph nose or commenting on my “burn.” Now, my skin tone is even and clear, and the moisturizing cream keeps my normally very dry skin soft all day.

Now, the money mama talks pricing. Riversol offers two kits. The first is a sample kit which issupposed to last two to three weeks. At only $29.99 plus shipping and handling, it’s a great way to test the product without committing to the expense of the full kit, which rings in at $218. The company says the full sized products should last about three months; however, I think my kit will last at least six months, if not more. The cream especially goes a long way—you don’t need to use a lot for results.

I think the best part of this solution is that if the product doesn’t work for you, you can return the bottles (even if empty) within 60 days of receipt for a refund of your purchase price (less shipping & handling). This includes the sample kits.

I’m giving away a Riversol kit to one lucky Yummy Mummy Club member. Simply post below and let me know why you’d want to win this kit (is it for yourself? A friend?) as well as whether you’d like the normal to dry or normal to oily kit if you win.

Got a minute? Check out Riversol’s unmask video on YouTube.

Yummy Rules and Regs: You must be a Yummy Mummy Club member to win. Click to sign up! It's free and filled with perks. One comment per member. Entries accepted until January 31, 2012. Contest open to Canadian residents. Winners will be picked using www.random.org.