Ryan Durrell: Dad of All Trades 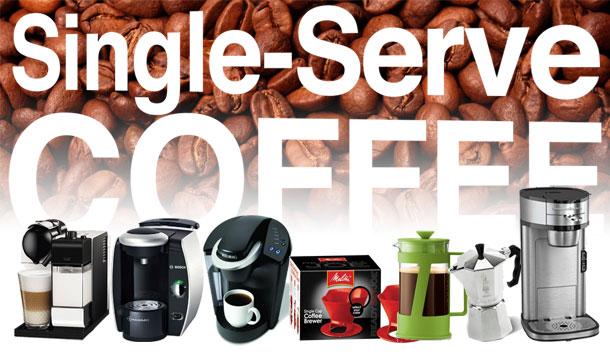 Personally, I use a full-sized brewer. It makes copious amounts of coffee at once in the most cost-effective way. But sometimes one cup of coffee is really all you need. Whether you’re grabbing a little alone time, or married to a weirdo that doesn’t “do” coffee (seriously, that’s weird), there are times brewing a full pot is both a waste of time and potentially a waste of the other black gold.

Manufacturers to the rescue!

There’s now a bevy of single-brew options out there that are happy to trade a little more money for convenience and speed. The ones most people know about are the “pod”-based machines: Nespresso, Tassimo, and Keurig.

A quick rundown of these machines: 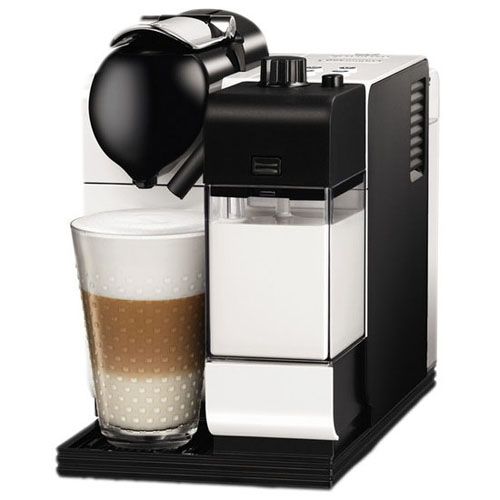 I’ll start with this one because it is my clear favourite for pure coffee snobbery. It offers something the others just can’t: an authentic gourmet coffee experience. The Nespresso isn’t intended to make a “mug” of coffee. No, mugs are crass, plebeian things.  The Nespresso experience is limited to short or long pulls of fine espresso that fill an espresso cup. With sixteen base varieties of espresso (which Nespresso calls the Grand Crus—fancy enough for you?), you’ll be able to dazzle friends with a truffle-box selection of espresso capsules, which is Nespresso-speak for pod. It’s no gimmick, either. Each capsule delivers a distinctly different flavour.

Nespresso also makes machines that will froth milk, to turn your kitchen counter into a true espresso bar. Better still, they sell a milk frother called the Aeroccino, that will automatically produce the finest cappuccino froth—warmed perfectly in about sixty seconds, with just the push of a button. I’ve been to many pretentious restaurants that serve cappuccinos that don’t hold a candle to the Nespresso experience.

The downside: ounce for ounce, the Nespresso costs more than going out for coffee. The portions it produces are haute cuisine small. “Dainty,” would be a nice way to put it. Around our house, we use mugs—and like I said, the Nespresso doesn’t do “mug.”  So, the biggest downside to the Nespresso is that you’ll become hooked, and up your dose to two capsules each time you want a coffee, because just one shot won’t be enough. 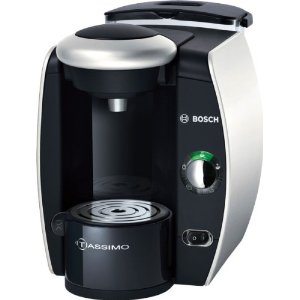 Popularized by its wildly well-received social media campaign, the Tassimo sets itself apart from the pack with its barcode system, which adjusts brewing settings based on the type of pod placed in the machine. This makes the Tassimo able to brew espresso in one minute and a mug of coffee the next, with the push of a single button. Neither the Nespresso nor the Keurig can claim the same.

The Tassimo is probably the best all-rounder. It’s the crowd-pleaser of the bunch, able to make the widest variety of coffee and tea drinks from its T-Discs, which is Tassimo-speak for pod. There are even milk pods that use condensed milk to produce something similar to milk froth, for cappuccinos and lattes. You can grow to like them, like the way some people like the taste of aspartame in Diet Coke.

The Tassimo makes a decent cup of coffee, depending on the brand of T-disc selected. Brew time is excellent, and you’ll quickly fall in love with its push-button, no-think brewing tech at 6am. At night, getting an espresso to pour over chocolate ice cream, or making something similar to a cappuccino, will be a pleasant way to decompress. 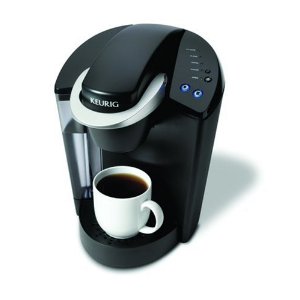 Based on my own word-of-mouth data, the Keurig is quickly becoming the most popular machine (formerly the Tassimo, drawing from the same data source). The popularity of the Keurig seems to be its wide variety of K-Cups, that’s Keurig-speak for pod. Keurig also recently welcomed Starbucks, away from Tassimo, as a pod provider.

Keurig machines are generally cheaper than Tassimo machines as well, probably due to the lower cost approach to the brewing system, which doesn’t incorporate a barcode and scanner to determine which pod is inserted. On the downside, the user is left to adjust their “brew” by themselves. This system works just fine for coffees, teas, apple cider, etc. Keurig has recently released a new machine, called the Vue, which allows it to make “cafe” drinks like cappuccinos. It also allows iced drinks to be made. The Vue system wasn’t sampled for this review.

Keurig drops some of the high-tech features of the Tassimo, but brews a good cup of coffee, generally with the same ease. Insert pod, push button, ingest caffeine. Again, perfect for the first-on-scene parent (first to get to the kitchen in the morning). It lacks the versatility of the Tassimo, but otherwise the two tend to be good options.

With the ubiquitous nature of the single-serve machines, the low-tech predecessors are fading into the background. So, I thought I’d call some of them out here:

I used this method in university and for a couple of years while living on my own afterwards. This is little more than a small coffee filter holder (#2 filters to be precise). The filter holder is designed to fit on the top of a mug and you manually boil and pour hot water over the grinds. How you boil the water is up to you, so this is a perfect camping solution. Small, lightweight, and so cheap. Melitta offers a version called the Ready Set Joe, which is sold at Canadian Tire.

Note that you’ll need to buy filters, or find a small reusable filter. In a pinch, you can use paper towel as a coffee filter, though. Not that I’ve ever done that . . .

This type of brewer is seeing a resurgence after an article in the Globe and Mail. Therein, they discuss a higher cost porcelain version, made by the Hario Glass Company, called the V60.  Trust me, the cheap camping version makes some of the best tasting coffee I’ve ever tasted  so there’s no need to jump in with both feet and buy a higher cost version. 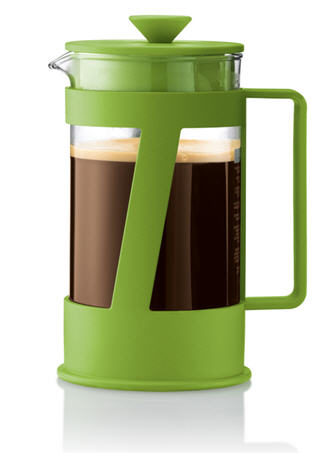 Bodum made these popular and continues to churn out beautifully-designed French presses, but there’s functionally no difference between a Bodum and other brands. I see these all the time at HomeSense for just a few dollars, and I am constantly tempted. Almost universally, these are made from glass, so they aren’t as good for taking camping, but they are very good for trips to the cottage or a vacation rental.

They make terrific coffee with rich flavour. Just make sure you get your beans ground coarse, otherwise you’ll have a lot of grinds at the bottom of your mug.

Yet another way to make coffee, this time aimed more at espresso drinkers. I bought a medium sized, shoddily-made moka pot from HomeSense just for this review. Buying a good moka pot is probably a good idea. Sniffing the inside of my cheapie review unit is like huffing a handful of Sharpies. Oddly ( and thankfully) the smell doesn’t make its way into the coffee.

A relatively expensive Moka Pot is still less than half the price of any of the mechanical solutions and makes terrific espresso-like coffee. Many people insist this is the best way to make coffee.

The Scoop, from Hamilton Beach

The Scoop is a single-cup brewer that works exactly like a regular drip brewer, except that it only makes one cup of coffee. The trick here is that it is made to brew directly into your mug (travel or regular).

The Scoop also happens to include a scoop-shaped filter that you can use to scoop coffee grinds and place directly into the machine. The machine contains two scoops, which is really good news because if it didn’t and you needed to make a second mug of coffee, you would have to go out of your way to completely dry the scoop before using it to scoop more grinds.

If you like to buy your coffee in what most closely resembles an oil drum—those extremely large tins of coffee that are generally associated with brands like Maxwell House and Folgers then this is the brewer for you.

You may be wondering why you would buy a brewer capable of only brewing a single mug, if it works almost exactly like a regular coffee machine. The Scoop takes the coffee pot out of the equation, so there’s one less thing to wash. But, you’ll be working overtime scooping grinds if company comes over.

I tried The Scoop seven or eight times, and even enlisted the help of @HBCanadaNews—Hamilton Beach’s Twitter account—but was never able to successfully brew a mug of coffee anybody would deem drinkable. I’ve read enough reviews to conclude that  something was wrong with my review unit.

Sidebar: The Scoop, on loan from Erica Ehm, met an untimely demise. Don’t worry, judging by the injuries, death came quickly and there was no suffering. I still have no idea what actually caused the damage. And, in case you’re wondering, Erica was super cool about it.

So, seven options. All with advantages and disadvantages. Here’s a handy table to help decide which is for you including purchase and annual running costs (click image to open):

Ryan Durrell: Dad of All Trades Upsize Your Tall to Venti for Grande Savings

Ryan Durrell: Dad of All Trades Don't Forget the Smoothie