Affordable 2013 Cars to Watch Out For

Five 2013 models that promise to be big on style and fun, but still fit the tight family budget

Affordable 2013 Cars to Watch Out For 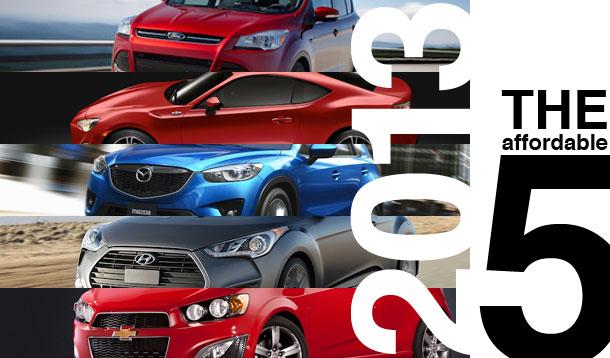 Here they are, in no particular order.

Don't forget to watch out for these great vehicles at the upcoming Canadian International Auto Show.

Here’s why: It’s beautiful. It continues Ford’s impressive designs of late and will no undoubtedly be a winner with parents of young kids. With an innovative kick-to-open rear hatch and other technophile-friendly Ford hallmarks (e.g. Sync) that continues to wow, it’s one to watch out for.

Here’s why: Because it represents a manufacturer’s attempt to build a car for car enthusiasts that dials back the electronics, and dials up the fun. If it hits the price point I’ve heard Toyota’s been shooting for, it may just be the hottest daily driver in decades.

Here’s why: Smaller SUVs are really hot right now. Parents want practicality, but their wallets want good gas milage. Mazda has been delivering fun-to-drive vehicles for decades, but with the introduction of their SkyActive technology, they’ll be getting class-competitive fuel economy too. The word on the internet is that the CX-5 delivers real frugal fun.

Here’s why: Automotive prototypes are to their production counterparts what fast food in advertisements is to fast food at the restaurant—a sad, soggy, reality-check. The Hyundai Veloster looks so much like a prototype, I do a double-take every time I see one. The turbo version will add serious “go” to all that “show.”

Here’s why: I am a sucker for these small, cheerful runabouts—the more the merrier. Chevy won me over last year with the Cruze and Orlando, and I expect the Sonic to be more of the same. The big deal here is that the Sonic passes the most stringent crash tests to date, further disproving old-school thinking that small cars can’t be safe. The 2013 RS model will give the Sonic an added dash of fun.