Ryan Durrell: Dad of All Trades

A concept car you can actually buy, and really buy into 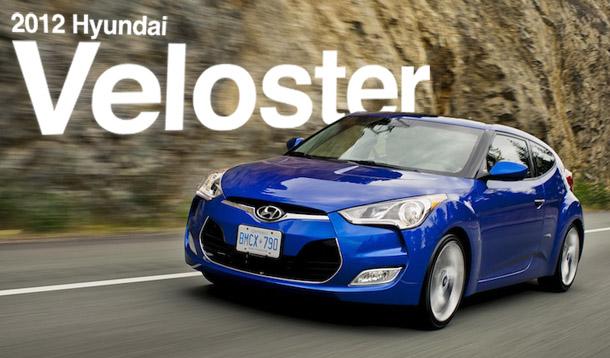 There's no getting around it, I don't have a current enough vocabulary to describe the 2012 Hyundai Veloster in terms that will resonate with the 20-somethings I figure are the Veloster's target market. At first glance, at least, this looks like a car designed for 20-somethings, doesn't it? Is it hip? Dope? Rad? Sweet? I haven't the foggiest idea — I'm a dad, and even if I did, coming out of my mouth they'd still be awkward. What I can say for certain is, a 20-something I'm not, and I really like the Veloster.

Hyundai is absolutely "killing it" right now (feeling alienated yet?). Car after car looks great and beats expectations. Hyundai won four of AJAC's Canadian Car of the Year categories for 2012, including the top prize. The Veloster itself won AJAC's Best New Sports/Performance Car (Under $50 K) award. So when I arrived at the door of the Veloster, I was expecting something good.

For starters, it looks like a concept car that just rolled off the auto show turntable. If you see one, stand back and look at the thing. It's wide and short. It has wild curves, scallops and humps.  This sort of outside the box styling, in my mind, is only matched by Nissan's Juke and Cube (personal favourites).

The roof of my tester (equipped with the Tech package), seemingly black, is actually all glass. The A-pillars (forward of the driver) are blacked out to give the front window a wraparound look. The back hatch is so sloped that it ends with a sliver of glass, affixed to which you will find the world's teensiest window wiper. Below that, a stylish center-mounted dual exhaust. It's got take it or leave it styling. I've heard both extremes. Personally, I'll most definitely take it.

Nice styling details are everywhere.  The front headlights are as much form as function, with LED lighting running below the main lamps, as was made popular by an up-market brand whose name rhymes with "rowdy." There are vent-like details on the hood, scoops out of the rear to draw attention to the tail lights, and colour-matched inserts in the large wheels (depending on the colour and trim-level selected). 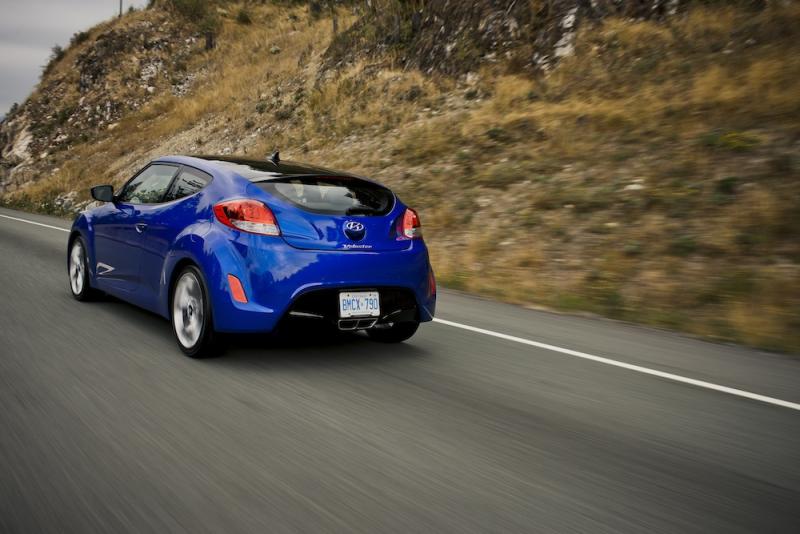 The outside I saw coming, literally — Hyundai teased the Veloster with its concept in 2007.  The inside, however, was a real surprise. In my top-of-the-line tester, the car was fitted with a touch screen navigation and entertainment system with iPod and auxiliary inputs, Bluetooth hands-free, heated seats, keyless entry and push-button starter — all that good stuff.  There were a couple of standout surprises though.  Hidden in the centre console is not yet another 12V accessory plug (formerly for cigarette lighters) but instead an honest-to-goodness household plug. Finally, I can just use my regular phone charger in my car!  The other over-the-top surprise for me was the power sunshade to cover the huge glass roof.  I expected a flimsy manual slider.  Colour me impressed.

I really had no complaints about the interior, save one.  The touch screen was too far for me to reach some of the settings without straining forward.  Minor, I know, but it seemed like a real ergonomic flaw. 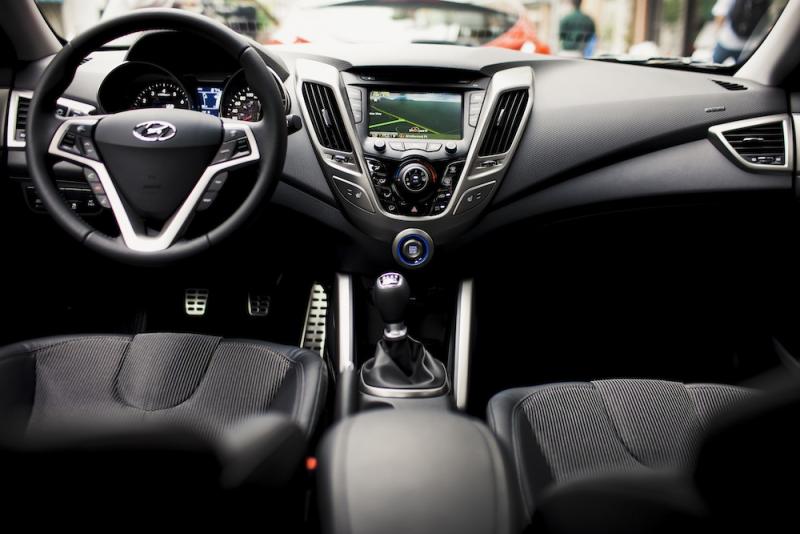 The interior is very nicely appointed with nice looking materials all over. The seats were extremely comfortable, and Alexandria and I both found the headrests the most comfortable of any car we've ever been in.  There's a faint whiff of cheapness here and there in the cabin, but like any smell, you get used to it and stop noticing it quickly.

So, then, the Veloster is a supermodel on the outside and tech-fiend heaven on the inside. Should you do that whole book-cover thing for engine? In a word, no.

The Veloster looks very sporty, but it's powered by a relatively small 1.6L motor incorporating the latest fuel-saving trick (direct injection).  It runs on regular gas and makes just 138 horsepower. The Veloster is really about frugal fun. One of my favourite kinds of fun!

The Veloster makes the most of its little motor, passing cars on the highway with eagerness, and accelerating quickly from stop lights if you want.  I had the manual version and managed great fuel economy during my week with the car, but even better fuel economy can apparently be had with the optional dual clutch automatic.  I think Hyundai has managed to strike a great balance between 'Eco' and 'go.' 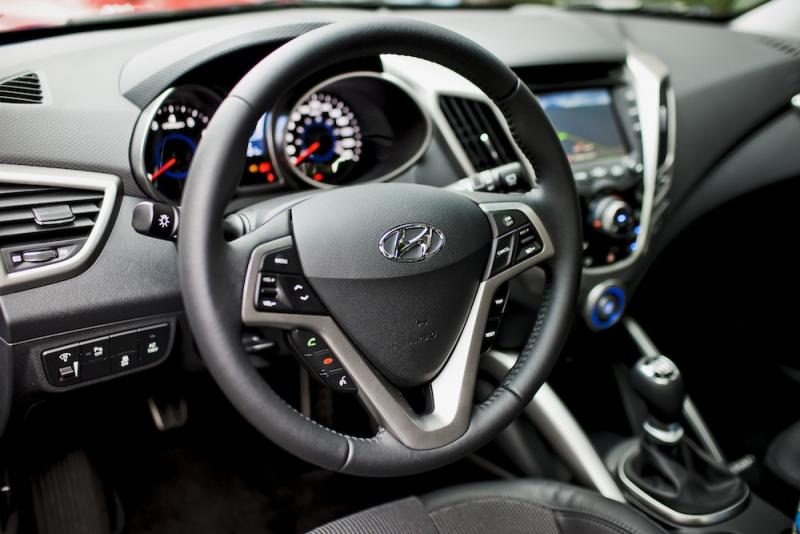 You don't hear too much about the Veloster's green cred in the ads, but it's so well thought out that there's even a built-in Eco-driving game buried in the entertainment system.  The game scores your green driving skills over a 10 minute period. This would be a favourite feature of mine were I a Veloster-driving commuter.

Some, however, want a little more 'go' to go with the 'show.' You can put my wife in that category, her only complaint about the car was the lack of power, but she's not really impressed by anything less than 300hp these days—anybody still wonder why I married her?  Hyundai will be answering the call for more power this year with a turbo version of the Veloster. I can't wait!  It looks 'sick'—ugh, seriously, I can't even type moderately current words without being embarrassed of myself. 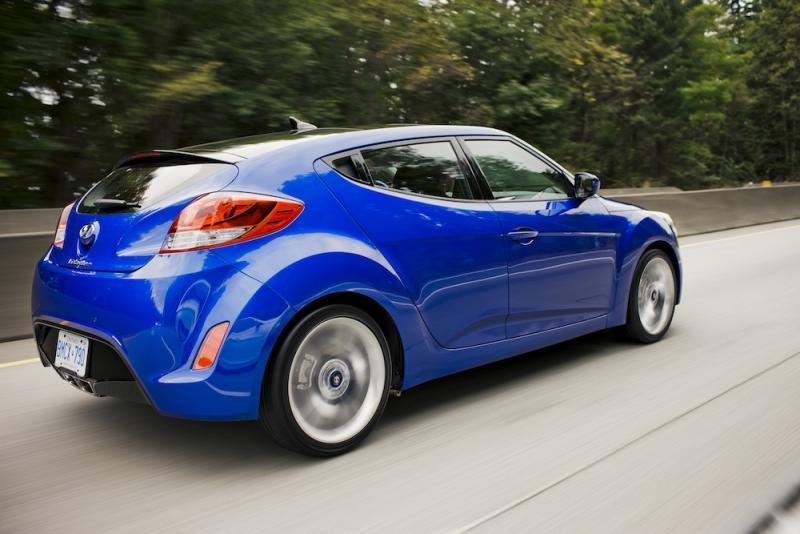 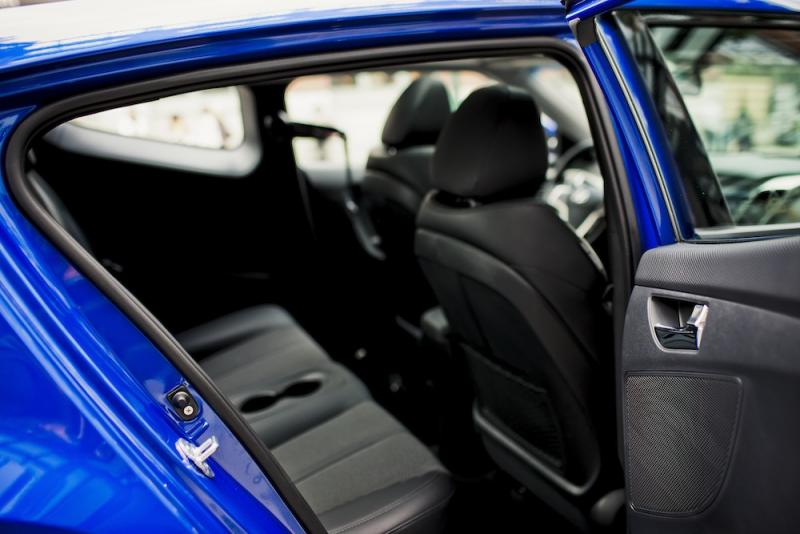 There's one trick left up the Veloster's sleeve. Oodles of practicality. Look carefully and you'll notice that the driver's side door is longer than the passenger's side door. Look even more carefully and you'll find a cleverly hidden door handle tucked behind the rear glass. Pull it and you'll be greeted with a full-sized door which opens independently of the front doors (differentiating the Veloster from other coupe-plus implementations like Saturn's Ion, Mazda's RX8 and Mini's Clubman).  And that little back door makes the Veloster a serious family option. Great for single-child families, and even better as the 'you take daughter to soccer, I'll take son to baseball' car. There's even a deep, roomy trunk to stash gear in, and a large hatch opening for big-item Ikea trips.

The Veloster is a great car for 20-somethings, true, but with all its practicality it has a much broader appeal.  During the week we had the Veloster, our nanny (and all-around amazing person) saw it in the driveway and remarked that it was unfortunate that it was a two door because her husband would love to get one. I eagerly showed off the third door and the large trunk area. One week later, she'd bought one to replace her Pontiac Vibe and husband's Toyota Corolla.  Our nanny isn't in her 20s, though. Her children are full grown.  So much for the 20-somethings theory!

I was really impressed with the Veloster during my week with it.  It attracted a lot more attention than its $18,999-$23,899 ($22,499 as tested) price tag warrants.  It follows through on Hyundai's promise of more for less and and is on-level with the best out there. If you like the way it looks, go check it out it's worth the trip.

If you're going to buy a Veloster, I'm not sure if the price of the tech package, which includes and upgraded stereo, interior trim, and seats as well as the beautiful panoramic sunroof and 18" wheels is really worth the extra $3,500—so check out both and choose the model that fits your budget best. Personally, I would opt for the tech package.  And, I would get it in black.

All photos courtesy of Hyundai—I usually take my own photos, but in the winter, cars tend to look pretty horrible by the time I get them home.

Ryan Durrell: Dad of All Trades Rolling in Ford's 5.0