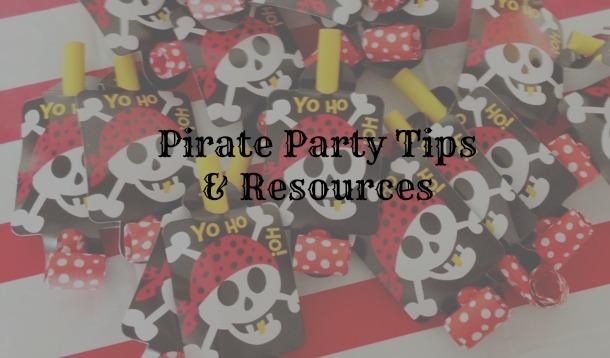 Connor turned five in June, and this was the first year we've actually held a proper birthday party with friends for him. (Bad parents.) I'll admit that the idea of the party made me nervous. Doing something cool that would entertain a bunch of five-year-olds? Ay yi yi. Maybe I just spend too much time on Pinterest.

Shortly after the new Target opened nearby I was walking through to check it out, and I came across a bunch of pirate-themed stuff in their birthday section. They even had a piñata. I figured Connor would be into that, so I floated the idea past him. He was in!

I created a pirate party inspiration board on Pinterest and there was no shortage of ideas to pin to it. (Evidently I'm not the first mom to host a pirate party for her kid.) My initial idea of a simple but fun party with some pirate-themed stuff quickly started to grow to Pinterest-like proportions. 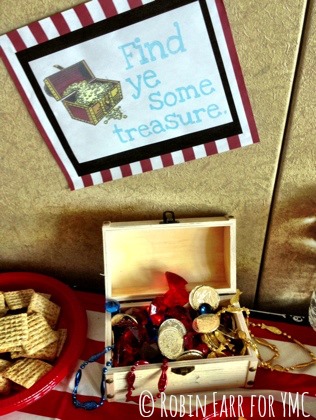 After briefly entertaining the idea of creating a giant pirate-ship birthday cake and a treasure chest to rival Harry Potter's vault at Gringotts, I scaled it back. Moms have enough to do without making everything a Pinterest competition. (I also chose a few strategies that made the actual day easier, so make sure you check out my post about that if you get heart palpitations just thinking about hosting a birthday party.)

Luckily, a pretty cool pirate party isn't hard to put together with some good printables and a trip to the dollar store.

Here are some ideas and photos to inspire you, and you'll find links to the printables I used at the bottom.

Every pirate needs a treasure chest, and the one above is a dollar-store specialty. This wooden chest (and a few extra I bought for a dubloon-tossing game) and the treasure are all dollar-store finds. The gold coins are actually "pirate gold," and the rest is just sparkly stuff Connor and I chose to fill up the chest—necklaces and jewels in various sizes. We put it on the food table, which also featured a pirate-themed tablecloth from—guess where?—the dollar store.

To be a proper pirate, you have to have two things: an appropriately menacing (or scruffy) hat and an eye patch. My husband likes doing balloon animals, and he found a tutorial for pirate hats online. They weren't hard to do, and he made one for each kid when they came in. The kids got to choose whether they were a happy pirate or a mean pirate and my husband decorated the skull piece accordingly. (I think we only had one mean pirate. Go figure.) If you're not up for doing balloon hats the dollar store has pirate hats too. 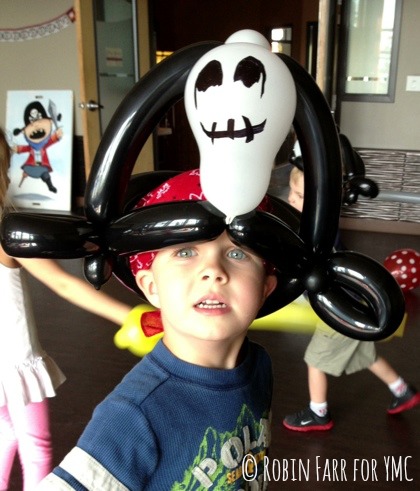 We also set out a package of eye patches (dollar store, baby) so the kids could each take one to wear. 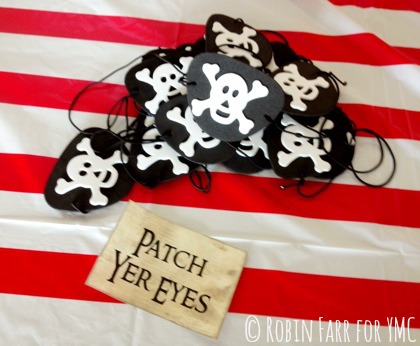 We planned three games. The first was Pin the Patch on the Pirate and my husband (because he's an over-achiever like that) painted this pirate on a big piece of cardboard. A bandana and an extra eye patch with some sticky tack on it and we were good to go. The kids had fun with this one (but any game where you get spun around is bound to be a hit). 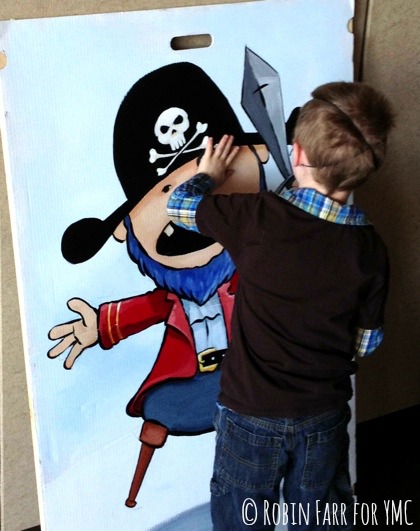 The second game was a Dubloon Toss—a few treasure chests and some extra pirate gold was all we needed. We set each kid up with an empty treasure chest and a bunch of gold and had them toss the coins into their chests from a foot or so back. The kids LOVED it. We played a few rounds of this one.

The last game we planned was Swab the Deck. I found some dish scrubbers at the dollar store that looked just like miniature mops (but anything they can "scrub" with would work too) and bought some ping pong balls. The goal was to push the ball with the mop across the room and be the first to cross the line.

I had fun with the food, and this is where Pinterest really came through for me. I found some "sea water" labels for bottles of water and some menu cards to use with snacks, then just picked food that fit the labels and that I thought the kids would like. 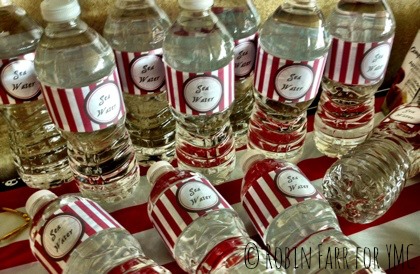 I also found a post about making pirate gold cookies. Who could resist? (Not me. I used golden Oreos and ate, um, a few of them myself.) 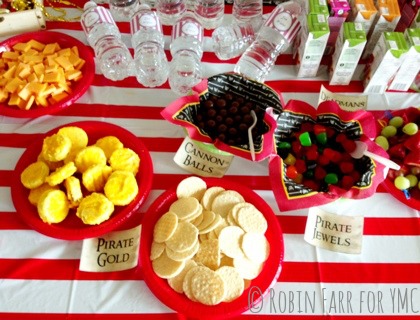 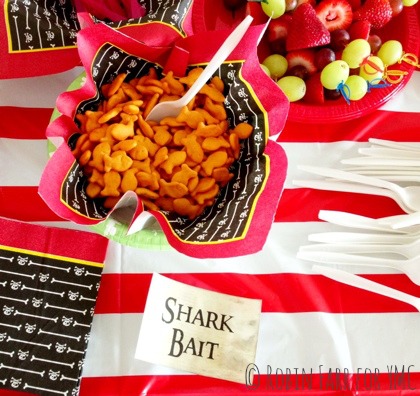 There are so many things you could use for skeleton bones. 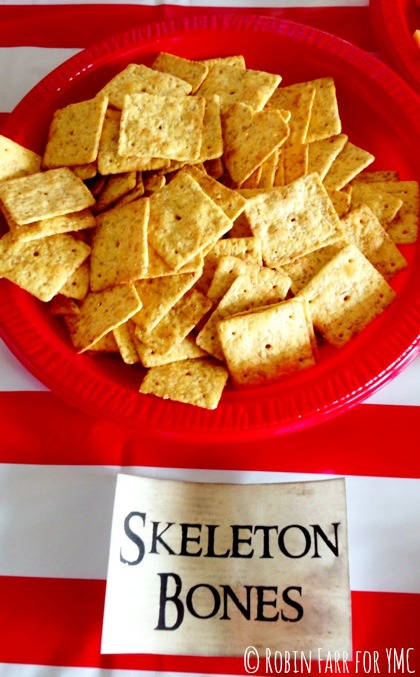 These cannon balls are Maltesers. (Even pirates like chocolate.) The pirate jewels are jujubes, but anything colourful would work. 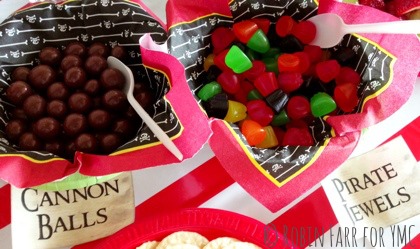 And that's it! A Pinterest-worthy party without overdosing on insanity. Your little pirates are sure to love it.

Pirate menus (and lots of other stuff)