Toys to Help My Baby Be Just Like Mom 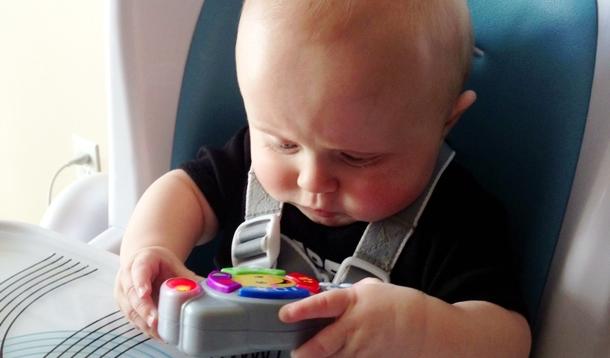 I am pretty bad at entertaining babies.

When I was pregnant with Connor the idea of endless rounds of playing peekaboo and singing Wheels on the Bus made me cringe. But when I discovered that the swish-swish-swish of the wipers during Wheels on the Bus makes my baby laugh, I’m much more willing to sing it over and over. And over. I guess that’s one of the miracles of motherhood—that the clichéd, annoying, gooey-faced stereotypes of how we interact with babies are much less annoying when we have a chubby little bundle of our own.

But I still find it hard to keep a baby entertained for any period of time.

I think with Connor, my first baby,  I tried to interact with him a little too much, and the poor kid was probably over-stimulated a lot of the time and I fear I’ve swung too far the other way with Ethan. Maybe it’s the second child’s lot, but he gets bored and isn’t shy about letting me know.

“There’s only so many times I can shake this rattle thing, mama,” he seems to say. “Give me something that actually does something!”

And then he reaches for my iPhone.

He almost sent his first tweet the other day and, while I like that my phone distracts him for a few minutes when I need to put dishes in the dishwasher or, heaven forbid, pee, I don’t actually want him to play with it too much. I’m afraid he’s going to go crazy buying up everything in the app store and, besides, my iPhone is my toy.

We have a bunch of baby toys but one of the struggles I find at this six-month-old stage is that he wants whatever I have. An iPhone that has colours and makes noise? Of course he wants it (and I haven’t even introduced him to Angry Birds yet). A cup of tea? It’s too hot, but he doesn’t know that and gets quite upset when I take it away. Apparently he wants to be just like mom.

Mom, meanwhile, sometimes—just for ten minutes—wants to sit and drink tea and peruse Facebook on her phone while her baby is happily playing with something appropriate for him.

Luckily, we seem to have found a solution with two new toys Ethan thinks are just dandy and that allow me to sit and play quietly by myself for a bit—a singing remote and a singing tea pot. Fabulous!

Both of these toys (properly known as the Click ‘n Learn Remote and the Say Please Tea Set) are both made—and generously provided by—Fisher-Price. They’re part of the Fisher-Price Favourites line, which includes six of their time-tested toys that help kids learn or play and to keep them busy while mom gets something done.

These toys live up to their promise, too.

Ethan doesn’t know that the remote is not an iPhone, and I figure that it’s teaching him some skills for when he’s got a man-cave later in life. (Kidding!) He can hold it himself and likes pushing the buttons and if he drops it I don’t cringe like I do when my iPhone takes a tumble. When the remote sings and talks to him about colours and numbers and shapes he watches it intently, so I figure he’s having fun and learning something more suited to his age than how to tweet.

The tea set has been an instant hit as well. The tea pot opens and sings songs and makes tea-pouring noises, and it comes with cups and some treats. Connor, my photo-shy four-year-old, thinks it’s the best toy ever. I came downstairs the other day and he and his penguin (and a couple of tiny, party-crashing squirrels) were having a tea party. 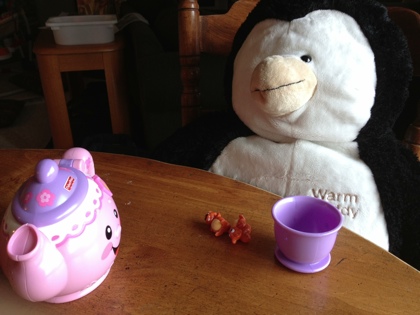 When Ethan manages to get a turn with the tea set he quite happily crashes it around on his high chair tray and I can drink my own tea without worrying about little fingers getting too close to it.

I used to look at other moms’ pictures of tea parties with their little girls and would feel slightly sad that I didn’t have a girl to have tea parties with too, but no more. As long as they want to be just like mom, I’ll quite happily have rowdy, remote-control-clicking tea parties with my boys. It’s a great way to keep all of us entertained.

Robin Farr: Meant to Be Sometimes Moms Cry at Bedtime Too

Robin Farr: Meant to Be Do Kids Call You By Your First Name?