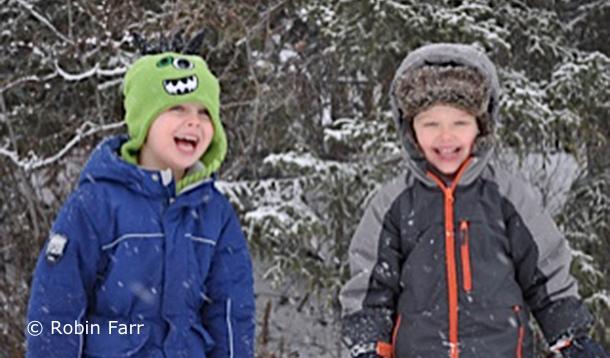 We had a play date with some new friends last week. Except Connor, who’s four, didn’t play so much as hide in the bushes.

I suppose I’m not really surprised he’s shy about making new friends. Right after he was born I got connected to a moms’ group thanks to a prenatal yoga class I had taken while pregnant. There were eight moms and their babies, all born within a month or two of each other, and we got together every week. A few of us saw each other several times a week, thanks to our regular play dates, a couple of baby groups we attended, and training—babes in strollers—for a 10K.

Those kids became Connor’s best friends. He has known them almost literally since he was born. He didn’t have to make friends with them because they were always just there. But of course when we moved to Calgary about a year and a half ago we left those friends behind. It was one of the very hardest parts about leaving—not just because I was leaving some incredible friends but because we moved him away from his friends as well. We've visited a few times since moving, and one of his friends came out to see us. You can see in the picture above how much fun they had.

We’ve had a few play dates here, but the poor kid doesn’t love making new friends. At first he said every kid he met was “mean.” They weren’t, but that was his way of expressing his discomfort. He’s a little better now, especially when there are a few kids to play with, but the one-on-one play dates are usually not terribly successful.

Like this one: A few months ago a mom I met, who has a son just a little younger than Connor, invited us over to play. I was so excited to give him the chance to make another friend that I was totally unprepared for what happened when we got there. Connor hid behind me and wouldn’t come out. He wouldn’t talk and certainly wasn’t about to play. He eventually came around a bit, but I admit that it was frustrating for me and a little embarrassing too.

He has since made friends with some of the kids at his preschool and he’s done really well in some activities at the YMCA (after initially having to be dragged there kicking and screaming). So when we planned last week’s play date I was sure we were going to have a hit.

It had all the ingredients for success — it was with a mom I like who I’d like to get to know better. Her son is the same age as Connor, and he’s into LEGO as well. They had just made a new LEGO table so I figured Connor would be totally fine playing with someone new.

Except then the weather turned nice and we decided to meet at a park instead. I should have known this would backfire, but I didn’t anticipate quite how badly. I had prepped Connor for the change in plans and he seemed fine with it. Until we got to the park.

He wouldn’t say hi and he didn’t want to play on the playground. He just took the ball he’d brought to play with and hid behind some trees (where, I might add, he promptly found the world’s biggest mud puddle and sat in it). When I coerced him to come out he grunted instead of talking and then started asking to go to their house so they could play LEGO.

“Why don’t we invite G over to our house one day and you can show him your LEGO?” I suggested.

“Connor, please stop crying and talk to me,” I implored.

He didn’t, and we eventually gave up and went home. He wailed the whole way and I have begun to seriously question whether we’ll ever have another play date.

Moms, help me. How do you help a four-year-old make friends?