Especially When I'm On Broadway 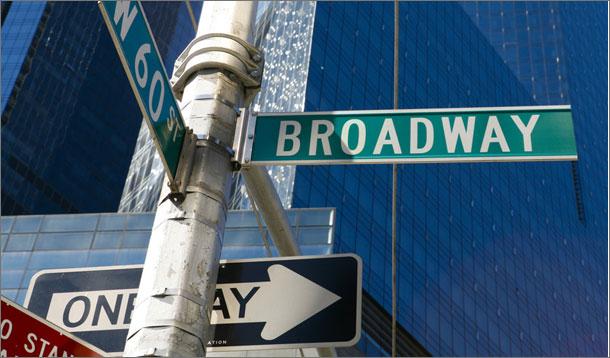 I just got home from a weekend in NYC! I calculated that this was my seventh visit to this amazing city—and it seems to get better each time I go. I walked more in the three days than I ever walk in an entire week at home. I people-watched, shopped, ate delicious food, and took in the energy and intensity that makes NYC so great.

But, the happiest place for me was seated in the dark in two different Broadway theatres watching incredibly talented women (and a few hunky guys!) command the stage with grace and beauty. The power of musical theatre never ceases to amaze me. Night after night, these actors leave behind their worries and fears, their to-do lists, and daily concerns to transform into characters, that sing, dance, mourn, and love. And, through their imaginations the audience is transported to a different time or place—and allowed, for a few hours, to suspend disbelief, to stop thinking about real-life, and to experience something completely magical.

If you're planning a trip to NYC this spring/summer, I highly recommend the following two Broadway shows—both totally different, both incredibly moving and amazingly powerful—both led by stunning, and super-talented women!

I have to admit my bias, since Caissie Levy—Molly—is my cousin and I've seen her in nearly every show she's been in. I'm a huge fan! She's wowed audiences both on and off Broadway in Rent, Hairspray, Wicked, and Hair—and now she beautifully transforms on stage into Molly (played by Demi Moore in the movie), a grieving young woman who has lost her man and will go any length to connect with him again. I'm so impressed with Caissie. She was born and raised in Hamilton and now she's living the dream—having truly 'made it' in the theatre biz. She's stunning, has a magnificent voice, and an amazing command of the stage. (Plus, there’s nothing cooler than knowing the star of a show and getting to visit her backstage in her private dressing room after the curtain falls!)

The other leading lady in Ghost, Da'Vine Joy Randolph offers a performance that on its own is worth the price of admission. Her energy is contagious and whenever she's on stage it's impossible not to laugh aloud and dance in your seat. This show is her Broadway debut and she already been nominated for a Tony Award!

Ghost combines incredible technical elements, new media, digital projections, and effects with fantastic performances and a timeless love story to make this one of the most spectacular and unique Broadway performances I've seen in a long time! If you don’t BELIEVE in ghosts now, you’re sure to by the end of the show.

End Of The Rainbow:

This play/musical recounts the story of Judy Garland toward the end of her stunning career and bittersweet life. She's returned to the stage for one last hurrah, fighting a losing battle to the lure of pills and booze, and desperate to be freed from the burden of celebrity she's carried around since she was a child. In her Broadway debut, Tracie Bennett is enchanting. As Garland she displays charisma and charm coupled with biting wit and hilarious sarcasm. One minute you're laughing along with her, the next minute you're sobbing. The story is one of tragedy—but the performance is nothing short of a triumph! Plus there are some great lessons to be learned about the importance of being true to yourself.

Finally, if want to extend the theatre buzz after the show is over, treat yourself to dessert at the kitschy but totally awesome Ellen's Stardust Diner, where the servers are aspiring Broadway stars (apparently 11 of them "made it" to the stage last year alone) and they sing, dance, and entertain long into the night.

The best news is that I'm going back to NYC in two weeks for trip number two (leaving my husband and daughter at home and taking some time to reconnect with my girlfriends!) We just bought tickets to see Once the Musical—a show that's been nominated for 11 Tonys. Happy Mother's Day to ME!

Hailey Eisen: Our Happy Place A Guide To Making Your Princess-Loving Toddler Happy