A RED AND WHITE DELIGHT FOR CANADA DAY Watermelon is such a classic summer snack, isn’t it? It’s the fruit of choice for picnics and soccer games; for me, it evokes nostalgic images of childhood and summer, along with ice cream trucks and playing in the sprinkler. A sweet juicy slice of watermelon goes with a hot summer day like a steaming cup of cocoa goes with a frosty day in January. But did you know watermelon also goes beautifully — incongruously enough — with feta cheese and mint?

It seems like such a strange combination at first glance, but this salad is a lovely combination of sweet and salty flavours; it is refreshing and delicious. It makes a wonderfully cool side dish on those evenings when it is really too hot to cook, and its colours make it the perfect accompaniment to a Canada Day barbeque.

Pour vinegar over onion slices; allow to steep for 1-2 hours.

Put cubed watermelon into a large bowl; add feta and the remaining 1/4 cup of fresh mint, chopped or in sprigs.

RED VELVET WITHOUT THE RED 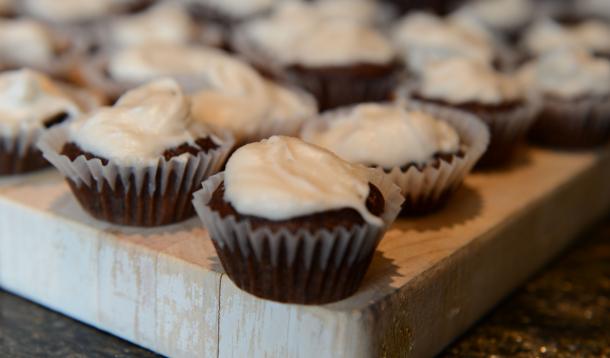 The answer, these days, is food colouring, although when the cake was originally created the colour came from a chemical reaction between vinegar and buttermilk, which allowed the red anthocyanin of the cocoa to show through. Nowadays most cocoa is Dutch-processed and more alkaline, and so the colour change from the chemical reaction is negligible, which explains the use of food colouring to enhance the cake’s appearance.

Everything you ever wanted to know about red velvet cupcakes, but were afraid to ask!

Here’s the thing, though: I’m not a big fan of food colouring, and less so red food colouring. I know I could use natural beetroot to tint the batter, and I do realize that red velvet cupcakes — naturally tinted or not — are not generally a major part of anyone’s diet but still I like to omit food colouring when I can. Do red velvet cupcakes need to be red to be delicious? Would a rose by any other name smell as sweet? I think we all know the answer to that. These cupcakes are not only delicious, they are vegan too — perfect for anyone avoiding dairy and eggs. Va-va-va-voom.

Preheat oven to 350 degrees. Add vinegar to coconut milk and allow to sit for 15 minutes.

Whisk together vanilla and oil; add to coconut milk mixture.

Add the wet ingredients to the dry ingredients, mix until combined. Do not overmix.

Fill greased or papered cupcake tins 2/3 of the way full.

Allow to cool and frost with velvet frosting.

In a small saucepan, whisk together flour and coconut milk and cook on low-medium heat until thickened, about 3-4 minutes.

Cream together coconut oil, vanilla, and icing sugar. Add thickened coconut milk and beat for 4-6 minutes until creamy and spreadable.

Store frosted cupcakes in the refrigerator. 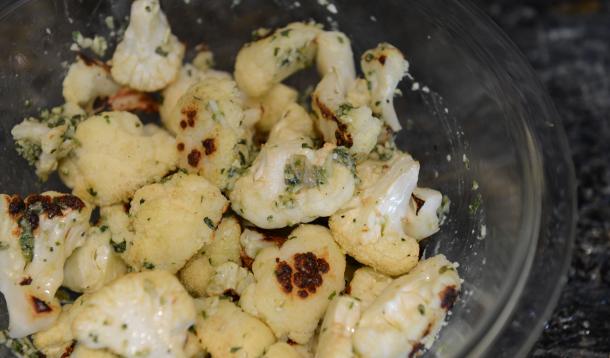 Then along comes a recipe like this that elevates nature’s lamest vegetable to superstar status. When I first tried roasted cauliflower, I was amazed at the flavor erupting from such a humble veggie. Then one day I found myself with some leftover basil so I made a little pesto, added it to the roasted cauliflower, and suddenly...skyrockets in flight. Dinnertime delight.

In a large bowl, toss cauliflower florets with the 1 tablespoon of olive oil.

Spread florets evenly on a rimmed baking sheet and sprinkle with salt and pepper. Roast in oven for 20 minutes.