You Should Read This Book: "Etta and Otto and Russell and James"

A DEBUT NOVEL THAT SUSPENDS REALITY 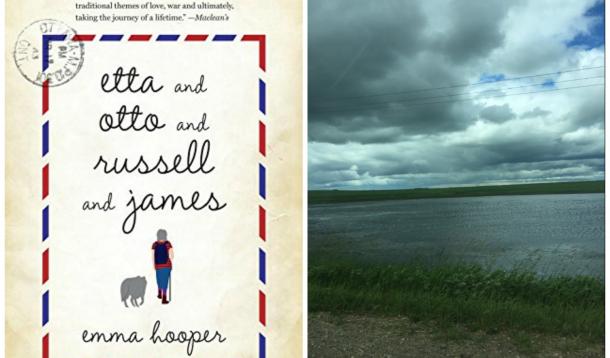 I admit, I'm a sucker for a good debut novel, and I'm especially partial to those that keep me guessing. Etta and Otto and Russell and James by Emma Hooper is both of those with the added benefits of a love triangle, some fantasy, and description of Canadian landscapes.

This somewhat bizarre journey is the crux of the novel; an old woman leaving her farm to walk to "the water," as she calls it, leaving her husband behind with a stack of recipe cards so that he can prepare the meals that she has served him over the course of their long marriage. As the journey continues the reader is transported from present day to the 1930s and 40s, and back again. The element of fantasy and suspended reality is kept throughout the book.

For me, the most fascinating part was the glimpses into farm life and the beginning of World War II, as seen through the eyes of children and adolescents. My own grandfather was a wheat farmer in Saskatchewan, who lived through the devastation that the drought in the 30s would have wrought. Imagine a world where dust blew through the air constantly, where crops failed, where people had large families and did not expect to maintain those large families into adulthood.

"Growing up, Otto had fourteen brothers and sisters...This was when the flu came and wouldn't go, and the soil was even dryer than usual, and the banks had all turned inside out, and all the farmers' wives were losing more children than they were keeping...for every five pregnancies, three babies, and for every three babies, one child."

Can you even imagine?

This was a world where children were sent off to relatives' homes because their parents didn't have resources to keep them, where pregnant girls were sent away "to an aunt's" and would return later, alone and deflated. This was a world in which tiny skeletons were buried in the back of convents and disfigurement due to farming accidents were a part of life.

And the dust kept blowing and blowing.

We all know what brought hope and employment to the people after the Great Depression, and that was war. War, with all its terrible implications, ironically enough breathed life into young Canadian men as they waved goodbye to their families on the trains that ferried them to "the water." And so we see that Etta's journey on foot is the same journey that Otto made by train, so many decades ago.

As Otto goes overseas to fight, Etta - a teacher at a one-room school - takes on employment at a munitions factory and becomes close with Otto's good friend Russell. This friendship continues throughout the decades, and on the surface, it seems that Russell alone is concerned about Etta's walking tour of Canada. He will take a journey of his own, but the three of them remain connected.

This book often suspends reality, in a charming and fairytale-like way. There are many twists and turns, along with glorious descriptions of the Prairies with the enormous skies, the Canadian Shield with its rock and forests, and finally, the ocean. The writing is beautiful and wrenching, and will leave you feeling emotional and satisfied.

RELATED: Five Books That Are Perfect For Your Beach Bag