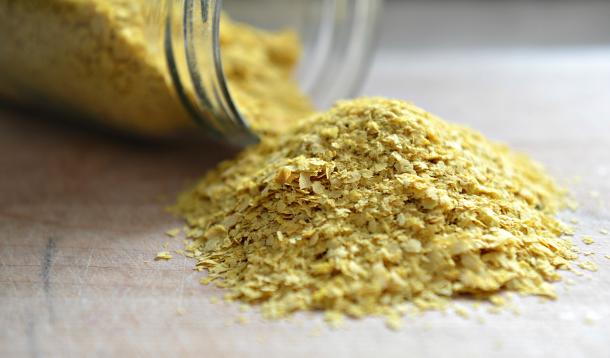 Nutritional yeast is a common staple in plant-based cooking, and of all the ingredients I use, it is the one I get questioned about the most. Nutritional yeast is as common as salt in the cupboards of those of us who have been following plant-based diets for a long time, so I sometimes forget that not everyone is acquainted with this tasty little flake. For every question I receive, I assume there are many people who wonder about it but do not want to ask.

What is nutritional yeast?

Don't confuse it with baker's, brewer's, or active dry yeast - nutritional yeast is an inactive yeast that is grown on molasses. It has a rich, savoury, umami flavour that is often compared with cheese. Since it's deactivated, it will not cause Candida issues, and it certainly won't be any help if you are trying to get your homemade bread to rise!

Why should I use nutritional yeast?

For me, the biggest benefit is the flavour. Nutritional yeast packs a delicious punch, and a little goes a long way - a few tablespoons can be enough to turn a sauce or soup from "meh" to "MORE PLEASE."

Besides the flavour factor, there are a lot of nutritional benefits to the well-named nutritional yeast. A 1/4 cup serving contains 45 calories, 12 grams of protein, 3 grams of fibre, and approximately 4% of the recommended daily iron value. Most brands are fortified with Vitamin B-12, which is something that vegetarians and vegans tend to lack. It's also a complete protein, meaning it contains all 18 amino acids, which is a boon to those of us who don't consume meat. Nutritional yeast is chock-full of B vitamins, which help reduce stress, nervousness, and PMS symptoms. Do you need any more reasons to try it? I didn't think so!

How do I use nutritional yeast?

Stir a few tablespoons into soups, gravies, salad dressings, scrambled eggs or tofu. Feeling snacky? Use it to flavour kale chips or sprinkle it on popcorn. I even like to make a vegan "mac and cheese" with it! Here are my favourite "nooch" recipes.

Vegan Tofu Scramble (but try it in scrambled eggs as well!)

And don't underestimate the power of sprinkling nutritional yeast over popcorn that has been drizzled with butter or melted coconut oil - that's what snack dreams are made of!

Okay, you've convinced me. Now, where can I buy it?

Due to it's newfound popularity, some mainstream grocery stores are now carrying nutritional yeast in their bulk food aisles or health food sections. It's more commonly found in health food stores, and can also be ordered online. Some common brands to look for include Bob's Red Mill or Bragg's.

I'm happy to pull the veil away from the mystery that is nutritional yeast. Got questions? Leave them in the comment section below and I'll gladly answer them.