I recently cleaned out my daughter’s closet and put at least four pairs of pants in a donation bag with the tags still attached. She never wore them. Not once. I tried to get her into the pants more times that I can count but my attempts usually ended in tears — mostly mine.

You see, my kids are very particular about their clothing. My daughter is just starting grade one but thinks she’s a teenager in an elementary school kid's body. She’s never been the biggest fan of the cutesy, cartoony clothes, but now, more than ever, she's looking for more “grown up” looks.

Then there's my son who loves skinny jeans and high top shoes and refuses to wear anything that fits too big on him.

They clearly have their own unique styles.

After packing up our last donation bag of outgrown clothing, I realized that something needed to change. I'm done with packing up clothes that have been outgrown before they were even worn.

This year, I think that the best approach to this situation is to allow my kids to choose their own back-to-school clothes. If they're choosing their own clothes, there should be no reason they won’t wear them.

Carter's | OshKosh was the perfect place to give my kids free reign. The clothing options are all school-approved and affordable. I can let them browse the store with confidence because I'm pretty sure that I'll like what they choose. Mom approved. When I told my kids we were going shopping, I was met with a whole lot of whining, but once I told them THEY would be choosing their favourite back-to-school look, the whining changed to cheers.

My daughter walked into the store and made a beeline for the trendy section. She armed herself with colourful leggings, bright tops, and funky ankle boots. She really wants to be fashionable but comfort is also important to her, so she’s not the biggest fans of jeans. Lucky for her, Carter's | OshKosh has a huge selection of the pieces she gravitates towards. She found everything she tried on really comfortable and, if it’s comfortable, that means she'll actually wear it! Bonus!

After trying on what felt like the entire store, she finally settled on a navy tulle skirt ($18), a pair of comfy leggings ($12), and a pink t-shirt sporting a lace heart ($12). Both my kids take after me in their love for shoes and Carter's | OshKosh has a great selection of funky shoes. My daughter topped her back-to-school look off with a cute pair of Mary Jane's ($18.75) that I know will match well with so many of her outfits. 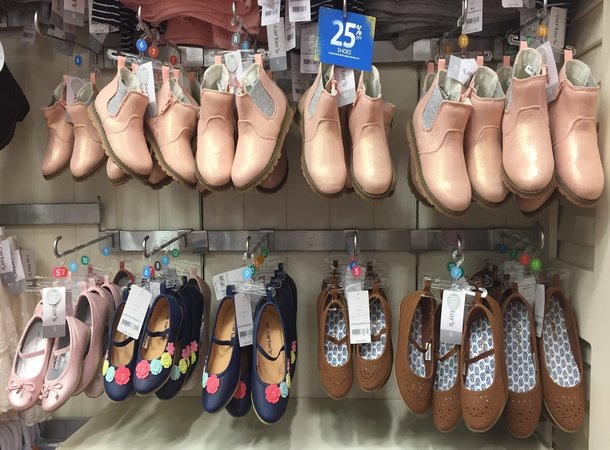 Shopping with my son was a completely different experience. He knows exactly what he likes and doesn’t have to look around. He wandered looking at the pants for a little and settled on jeans, which was not a surprise since he owns nothing but skinny jeans. He’s got a thin frame and other jeans tend to sag on him and leave him feeling bulky. This time, he decided he wanted to try a new style, so we picked out a straight cut as well as the skinny cut to try on. 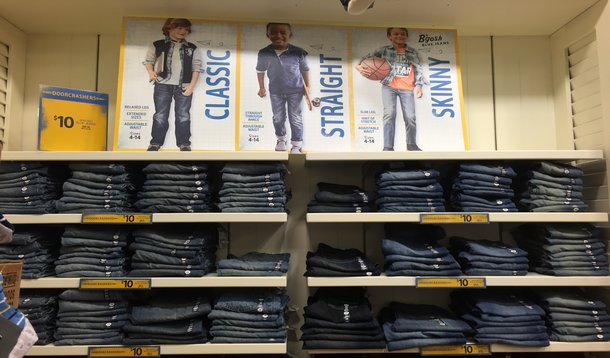 After trying on both pairs, he settled on the skinny cut but he was really happy that they didn’t fit too skinny; there was still some room in them.

My son is practical and as soon as he had decided on jeans, he looked at me seriously and said “Mummy, what I really need more than anything is new underwear. Mine are starting to squeeze me.” I quickly realized why once I looked at the tag on the back and realized he was wearing size 4 underwear...he’s going to be 8 in just a couple of weeks! Carter's | OshKosh has recently expanded their sizes and you can now get up to size 14, which is great! We had a great time shopping for back-to-school clothes together. My kids really enjoyed picking out their own clothes and their personal style shines bright in their choices. Shopping this way took a little pressure off me because I didn't have to wonder whether or not they were going to like what I chose because THEY chose them! Not me! Both outfits came in at $100 together and that included shoes, socks, and underwear!

Both kids are so excited for school to start so they can show off their new hand-picked looks and I'm excited to skip the morning fights over clothes. This is proudly sponsored by our friends at Carter's | OshKosh B'gosh.
www.cartersoshkosh.ca