If I used the same parenting methods why are they so different? 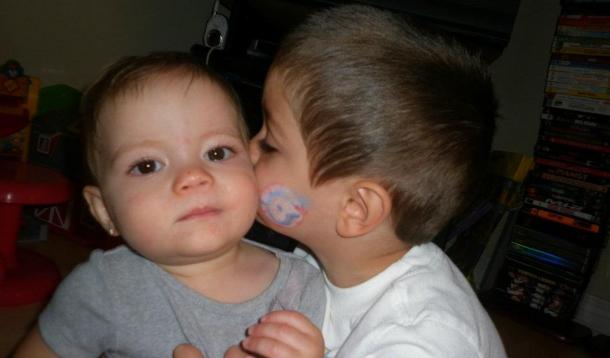 He slept so peacefully that I would wake up and shine a flashlight on his chest to make sure he was breathing.

I often found myself wondering if that was just who he was or if his lengthy NICU stay, where he adapted to nurse checks, babies crying and codes being called every so often helped him learn to sleep through anything.

Sleep didn’t come as easily to her. We had the exact same bedtime routine, warm bath, stories, lullabies, bedtime. Yet the moment I laid her down in her comfy crib the screaming began. The crying wouldn’t stop until I would pick her up. On more than one occasion I sat on the floor beside her crib and cried, not knowing what I was doing wrong, wondering why she just wouldn’t fall asleep.

One baby would happily sit on his own in his bouncy chair checking out a toy, babbling to himself and giggling each time I played peekaboo with the curtain each time I showered. The other would crawl up my leg as I sat on the toilet because she didn’t want to be away from me even for the thirty seconds it would take me to pee.

One was perfectly at peace snuggled up beside me in bed listening to me read stories, the other couldn’t get through one book without asking 5 to 10 questions.

One was content with me doing absolutely everything for him for as long as possible, the other tried to do it all herself even before she was physically capable of doing it.

How is it that two babies born to the same parents, raised in the same house could be so very different from each other than you may question their relation?

I fed them the same homemade baby food yet only one child ended up with a milk allergy.

They each had the same sleep schedule and bedtime routine yet one child struggles with night terrors.

Maybe no matter how hard I tried to make their baby years the same, there were little inevitable differences that pushed their way into their world.

I thought, as a mother, that I had so much control over my babies’ lives. I put so much pressure on myself to get it right, thinking that if I made the wrong choice it would somehow ‘break’ my baby. Truth is, they guided me on the path we took as mother and child.

It was nearly impossible to be the exact same mother to both children. They each had different needs.

One of my babies was bottle fed and the other was breastfed.

One had two whole years alone with our undivided attention, the other joined a family of three and shared the attention with a demanding two year old.

One baby spent the first six weeks of his life in a NICU while the other was safe in her crib beside my bed from the moment she entered this world.

Bottle fed or breast fed, co-sleeping or crying it out, whether I’m a helicopter parent or practice attachment parenting I love my kids fiercely and in the end isn’t that what matters?

Regardless of my methods, both my kids are turning into kind, smart, funny kids who constantly surprise me and continue to make me proud every single day.

While I worry less about what I could be doing wrong I learn to recognize all that I am doing right and I start to cruise through this motherhood journey at a much more relaxing pace.

Natalie Romero: Putting it Out There What Happened During My Kid's Eye Exam Surprised Me