Motherhood Made Me Angry 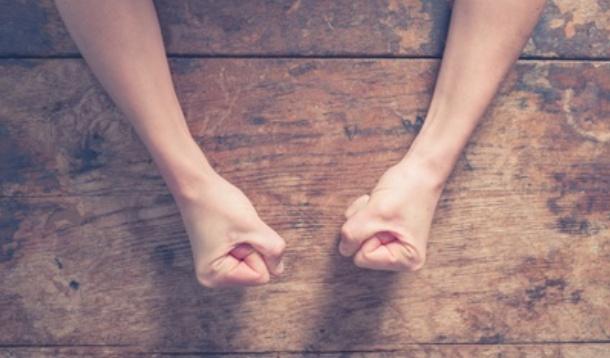 The rage bubbled up from a dark place deep inside me about three days into the experience. It reared its ugly head as a result of the fear. The fear of learning that my first child had a condition that occurs in only 1 in 5,000 births. It came when I stood over my baby right after he had endured hours and hours of surgery. I looked down, unable to touch him, his face black and blue from the bruising and I screamed inside. The rage became all mixed up with the fear and was boiling over inside, screaming to get out.

It was my first experience with mum rage.

It was a symptom of the PTSD I was dealing with and once I had dealt with the PTSD I figured the rage would no longer exist.

Cut to a few years later.

I was running on no sleep. Dinner was burning in the oven, a toddler was screaming in a fit of toddler rage and I tripped on one of the billion toys that was littered across the floor while racing to the baby who had been woken by the toddler tantrum.

I felt the rage bubbling up. I stood up and screamed “SHUT UPPPPPPP!!”

Okay; I didn’t scream it out loud but I did scream it in my head.

I felt crazy. How on earth could I feel angry? They are babies. They aren’t crying to annoy me. They don’t understand that I haven’t slept. They aren’t trying to make me angry. Yet I felt angry. Really angry.

That day, instead of screaming shut up out loud. I stomped up the stairs and straight into the bathroom. I closed and locked the door and slumped down on the side of the tub.

I felt like a failure. I remembered everything we had been through. I was supposed to be grateful that I had two beautiful, healthy children. We had been given a second chance, didn’t this mean I wasn’t supposed to lose my patience?

I took a few really deep breaths and wiped the tears from my eyes before standing back up again. I gave myself a little pep talk in the mirror and opened the door.

In the years since, I have felt mum rage so many times I have lost count. When I’ve asked them to put on their shoes 15 times and they are still sitting on the couch watching Bubble Guppies. Or maybe when they stand in the candy aisle refusing to budge until I give into the Sour Patch Kids. Perhaps when I’m on a really important phone call and they are playing WWE and screaming as though one of them could be losing a limb in the background.

I have raised my voice, I have cried in front of them and I have stormed out and gone for a walk around the block to cool off.

I want my children to feel comfortable with their feelings, including the not so good ones. They need to know that feeling angry is normal. I hope that most of the time I can model positive ways to handle those feelings but I’m human, I don’t always handle things exactly as I should.

Motherhood can be frustrating, it can be trying and sometimes it can be terrifying.  Becoming a mother leaves you full of love, happiness, fear and frustration. We all have moments where we feel overwhelmed and out of control.

Own it, take a break, take a deep breath and move on.

RELATED: How Many Mothers Are Trying to Parent Scream-Free?