What My Mother’s Intuition Missed When I was pregnant with my son, my gut told me that something wasn’t right. I spent the entire 37 weeks fighting what my intuition already knew; that my son was sick. Seriously sick.

When he was diagnosed with a health issue not long after his birth, it was my first lesson in trusting my instincts when it comes to my kids and their health. In the years since, there have been many incidents when I trusted myself and was right.

The suspicious fever and cough? Not just a regular cold and my trip to the ER was the right move.

That tummy ache that won’t seem to go away? Glad I pushed for the allergist appointment because now we know the cure is avoiding lactose.

The point is my mother’s intuition always seemed to kick in at just the right moment and I instinctively know when something needs to be looked into further.

That’s why when I took my daughter for a standard eye exam just before she started Junior Kindergarten I expected it to be just that, standard, routine, nothing out of the ordinary. There wasn’t an ounce of me that thought anything was going to come up. In fact, there was a part of me that wondered if it was even worth the half hour of our evening that would be spent in the Doctor of Optometry's office at all.

Boy, was I wrong and my mother’s intuition was definitely way off on this one. As my daughter sat across from me in the exam chair and looked to me to help her identify the letters and pictures the Doctor of Optometry was showing her, my heart sank. She couldn’t see. How could I have possibly missed this one?

My mind raced through the last few weeks, months - even years - searching for signs I had overlooked. Did she struggle when we read bedtime stories? Was she not seeing the movie during our weekly family movie night? The answer was no. She hadn’t shown any sign of vision problems at all. I was confident in this. Apparently, I was one of the 60% of parents who, when surveyed, mistakenly thought they would know if their child had a vision problem.

When he noticed that I seemed a bit distraught, the Doctor of Optometry explained to me that he was not surprised that she didn’t display any signs of struggle. He explained that many vision problems are completely symptomless, especially with kids. They don’t know any different, he explained to me. She doesn’t realize that the rest of the world doesn’t see like she does. Turns out, she is almost always focusing out of one eye and to her that is normal. She would have no reason to tell me anything is wrong because in her eyes, everything is working just as it should.

This is why it’s recommended to take your child for a full eye exam before they reach school age. In fact, the first exam should happen between the ages of six and nine months. By the time your child reaches school age they should have their eyes checked annually, so that vision issues can be detected before they lead to more complex problems. October is Child Vision Awareness Month and is a perfect time to take your child in for an eye exam if they have never been before.

Watch this short video to learn the symptoms of vision problems in children:

Once we knew my daughter needed glasses, the next couple of weeks were spent ordering her glasses and having them fitted. When she finally put on her first pair of bright red glasses that she picked out herself, she took a long look down to the end of our street and with shock in her voice proclaimed “I can see all the way to the end of the street!”

It was sinking in that she hadn’t been seeing clearly and that with the help of these new red spectacles she could see so much more! I thought we were about to face a challenge in getting her to wear her glasses. Even the doctor of optometry warned us that young children often avoid wearing their glasses because their vision is so normal to them. He advised that we should try to encourage her to wear her glasses as much as possible so that both eyes receive as clear an image as possible during this critical time in her visual development.

From the moment she first put those glasses on, we haven’t had one argument about her wearing them. She may have been symptomless but the fact that she puts on those glasses first thing in the morning tells me that they are helping her. 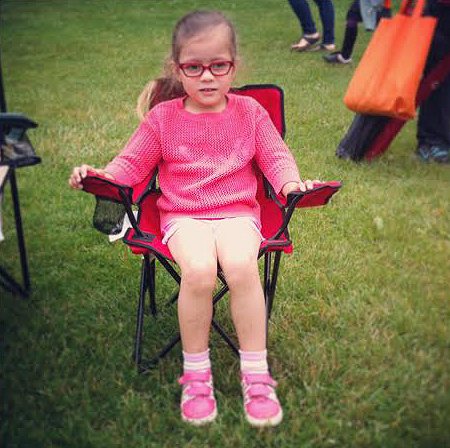 After she was able to see all the way to the end of the street for the first time, she turned to me and smiled and I suddenly stopped caring that my mother’s intuition didn’t pick up on this one. Luckily I took her to an Optometrist before her struggle negatively impacted her life. She wasn’t struggling in school, she could read, colour, and play with her friends.

Instincts are an important part of parenting, especially when it comes to your kids’ well-being but sometimes you need to take a pro-active approach and accept that there are things that may fly under your mother's intuition radar.

Did you know 75% of vision loss is preventable? It’s time to open your eyes to maintaining healthy vision.

Take a few minutes to scan these articles that will teach you everything you need to know about eye health.