We Are Raising the Mediocrity Generation 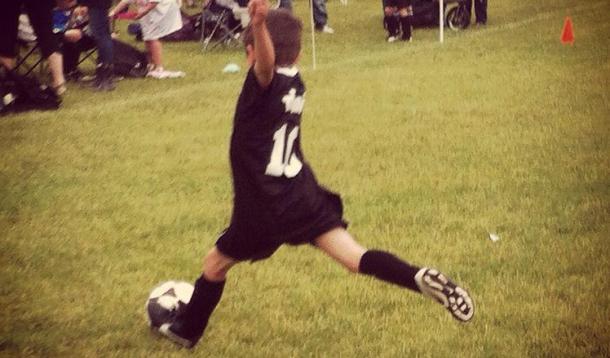 We are a sports family.

I believe in team sports.

I believe in my kids getting out there and learning to work with others. I believe in activities that get them outside, running around and burning energy. I believe in the fact that they have something to practice and focus on. I believe in something that teaches them to lose with dignity and to win with grace.

In all honesty the only thing that I find has the ability to put a damper on team sports is parents.

We've all heard stories of parents losing their cool during their kids sporting events, yelling at referees and even getting into fights with other parents. With my husband being a soccer coach, I have witnessed some ugly behaviour in the stands, often aimed directly at the coach who is volunteering their time, while the kids watch on in confusion.

After one of our local soccer league's coaches was recently approached by a player's Dad, I learned it's not uncommon for parents to request sports leagues put a cap on the number of goals each child is allowed to score, even going as far as to ask coaches to bench the players who might be playing at a higher level than the rest of the team.

To tell a child who may be really good at a sport to stop being so good seems completely ridiculous.

If my child got 95% on every exam but the rest of the class only got 65% would I tell him not to study next time? No; of course not! Why then, do we expect a child to stop putting in his best effort in a sport because others on the team aren’t as good?

Do we want to raise a generation of children who are mediocre at everything they do? Afraid to excel in any way because of what others may think of them? Are parents really going to these extremes to try and control their child’s environment to make sure that they aren’t behind or is it because they don’t want them to feel badly if they aren’t doing well in a certain activity? Isn't physical inactivity in our children enough of an epidemic without complicating it even further?

The fact of the matter is your child will not be good at everything they do. Guess what? That’s okay! The world is not going to stop and make life easier for your child so why start that now? You won’t be there when they are swimming in their first swim meet asking the other swimmers to slow down so that your precious little guy doesn’t get left behind. You can’t ask the other kids applying to University not to submit their best grades just to make sure your kid gets in. You won’t be sitting in on their first job interview trying to make sure your kid gets a fair shot at the job.

Sometimes it’s your child that isn’t the best in the show. It’s heartbreaking, I know, when your kid can’t seem to catch the ball or follow the steps in dance or keep up with the rest of the class in their reading abilities.

Want to know what I think the solution to this is? Stop focusing on the other kids and focus on YOUR child.

Figure out what your child’s passion is. Soccer not their thing? Then maybe try baseball next year. Ask them what they want to play and go with it. Then get out there with them during your free time and practice with them. Play with them. Cheer them on even if they aren’t scoring all the goals. Find what excites your child and get involved with them. Don’t worry about what the other kids are doing.

In my family, my son has found his passion and for right now that’s soccer. It makes him happy. He’s made friends. He glides across the field like he doesn’t have a care in the world and the smile that is spread across his face when he’s got a ball between his feet, could light up the darkest room.

Soccer has become one of the ways my husband and son bond. You will find them almost every day playing together, at the park, in the backyard, and even in the street. My son is good at it. I won’t apologize for the fact that he’s good at it. I don’t expect any parent to feel anything but pride when their child excels at something. Don’t ask me to tell him to stop scoring goals. I won’t and I wouldn’t expect anyone to do so.

The soccer league in our city, like many, has stopped keeping score for the younger aged kids, sand ome leagues remove the referees completely. While I don't necessarily agree with it, over time I have become used to it - and no, official score keeping does not stop the kids from tallying up their goals and declaring a winner at the end of the game. Human nature can be competitive.

In the end, what matters most is that they are having fun, but winning with grace and losing with dignity are not bad lessons for our kids to learn.

We teach our kids to give it their all, even when it’s hard; even when they are struggling. When you come across kids who are really good at any activity don’t ask them to not give it their all, cheer them on even if it’s not your child. I know there are times when we have to step in as parents and defend our children or speak up when we feel our kids are not being given a fair shot. Yet there are times when we just need to step back and let our kids figure it out on their own and realize that not everything is always going to work out to their advantage.

It’s just one of those life lessons that we aren’t going to like watching our kids learn.

RELATED: Why We Should Keep Scores In Sports

Natalie Romero: Putting it Out There The Surprising Pains of Motherhood