You Can't Play: Why This Girl Met Playground Discrimination

Why one little girl was denied access to play 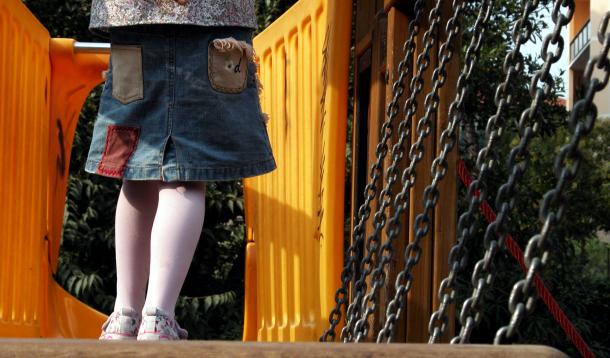 We love indoor playgrounds. They're places we take our kids and there's a local one we enjoy and take our kids to. They have been known to spend the entire day playing there and have a blast. But yesterday, according to Matthew Dupuis, his little girl Eloise was denied entry into a local play centre because she has to wear indoor shoes and ankle braces due to Cerebral Palsy.

According to a statement made on his Facebook page, Matthew claims that when he tried to explain to the owner that his daughter wears indoor shoes and ankle braces for support due to her Cerebral Palsy, he was told that this she could not wear her shoes/braces on the play structure as it could cause damage. He explained that they have been to the centre in the past and have always worn indoor shoes and they were told that they shouldn’t have been allowed on the play structure with shoes.

RELATED: This Boy With Cerebral Palsy Blew Away The Judges On Britain's Got Talent

Matthew took his daughter to a different indoor play centre where his daughter was allowed to play without issue.

The backlash on social media was immediate, visceral, and passionate. The story has been sent to local media. Parents demanding a boycott of the play centre, calling names, and making accusations. I even saw one tweet demanding the owner be put in jail! I don’t think that demanding the centre be shut down, as some have called for, is necessarily the best response to such an incident. Publicly shaming the owner and the business is never the best solution, in my opinion. This should, however, absolutely be addressed and I question if reasonable accommodation is being made in order to allow this little girl the opportunity to play as any other child.

Denying entry into an establishment due to a disability is discrimination, period. It is 100% unacceptable, 100% of the time. It is heartbreaking to hear of a little girl being denied entry to play, of all things, simply because she needs a little extra support by the way of shoes and as a parent of a child with health issues, I can’t imagine how devastating this must be to her parents. Without knowing details of the incident, it seems to me a little confusing to state that wearing indoor shoes on a play structure would cause safety issues. When children play outside on a play structure in a park they wear shoes. Is there a big difference between outdoor play structures and indoor play structures? While I do understand why the owner would want to investigate any and all safety concerns, I don’t see how a request as simple as wearing special indoor shoes with braces is something that cannot be accommodated. This is a perfect example of when a policy can be easily altered to be inclusive of someone with special needs.

RELATED: Play Date Tips - How To Include Kids With Special Needs

Social media can be great in terms of gaining support and demanding change however let’s be careful not to use it to attack and abuse. Use it as a method to demand change. In this particular case, if the policy is not changed, then I would not be comfortable bringing my kids to an establishment that blatantly discriminates, however I am all for second chances. I am going to give the benefit of the doubt and assume that the owner really did have safety as her main concern, and not damage to her facility. I am going to assume that the owner now realizes that accommodating is her duty, not only by law, but she also has a moral responsibility to the children and members of her community.

It seems shocking to me that in today’s day we still have to have conversations about inclusion and accommodating in respect to disability but it seems like the conversation must continue. The silver lining in this cloud is that our community is backing this little girl and let’s make sure we continue to show her our support and demand change in a productive way.

Natalie Romero: Putting it Out There The Hardest Breakup of All: The Friendship Breakup

Natalie Romero: Putting it Out There What Happens When Mom Gets the Flu? In This Case, Something Awesome.