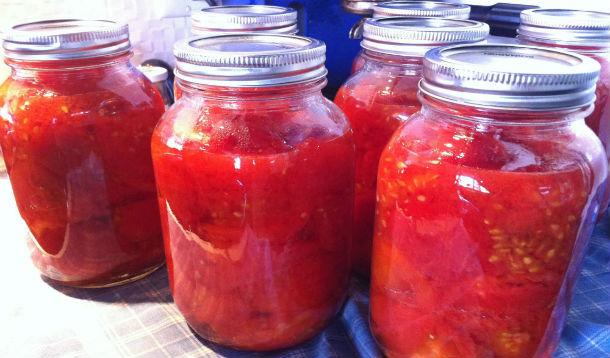 Over the last few years in September, I select the freshest tomatoes I can find at the market and I put them in jars. Because I love it too much! Having fresh tomatoes all year round is one the greatest pleasures in life, and you’ll know it when you open your jar full of sunshine on a dark cold winter night. ! can assure you that it is easy and not too long to do. In total, it takes me less than two hours for a dozen of jars and 20 pounds of fresh organic tomatoes that cost me $17. A small investment for a full season of quality ingredients in my cooking, plus pleasure for my taste buds.

A box of 12 jars, especially designed for preserves, any size you like

A large canning kettle, with canning rack—easy to find this time of year, in any good hardware store

Tongs that are made especially for removing jars from boiling water—do not skip that indispensable accessory, for about $7.95, you won’t regret it

A box of fresh tomatoes and a large enthusiastic smile 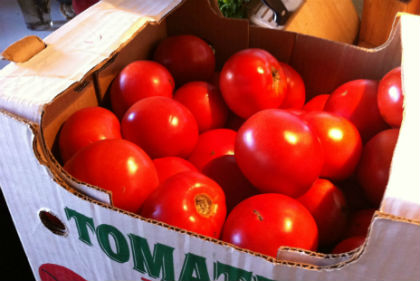 In a large pan, boil the tomatoes for about 2 or 3 minutes or until the skin starts to break 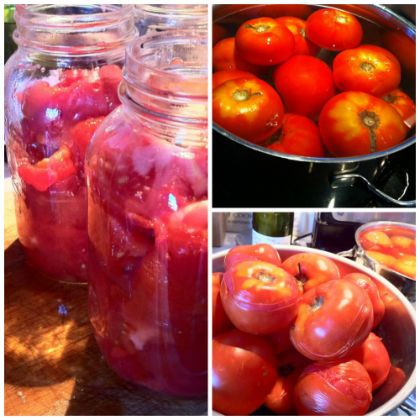 2. Sterilize the jars and lids

While the tomatoes are cooling off, boil water in the large preserves pot (half full of water) and let the jars and their lids soak in that boiling water, for about 10 minutes.

3. Remove the skin from the tomatoes and fill the jars

When the tomatoes have cooled off, it becomes easy to remove their skin and stems. Then, you can either cut them in pieces or put them as a whole in the sterilized jars. 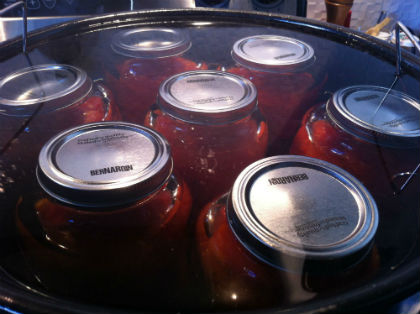 When the jars are filled with the tomatoes and their juices, when each and every jar is wiped off of any tomato or juice that may have dripped, you can put the snap lids on the gently screw on the metal rings until ‘finger tight.’

Then, put the jars in the canning rack and immerse them in the hot boiling water. Make sure that all lids are covered with water and let it boil for about 45 minutes.

Remove the jars from the big pot with the tongs and let them cool off for at least 24 hours, before storing them. You will hear a "pop" sound for each jar, indicating that the lid has sealed properly and that your preserving was a success!

Believe me, you will feel like the happiest and most privileged mom this winter when you taste the best tomatoes of the summer!

Category:
Food - Recipes
Tags:
tomatoes
preserves
mason jars
canning tomatoes
what to do with all of my tomatoes
natalie richard
Sep
13
2013

This Delicious meal is ready Ready in only 15 minutes 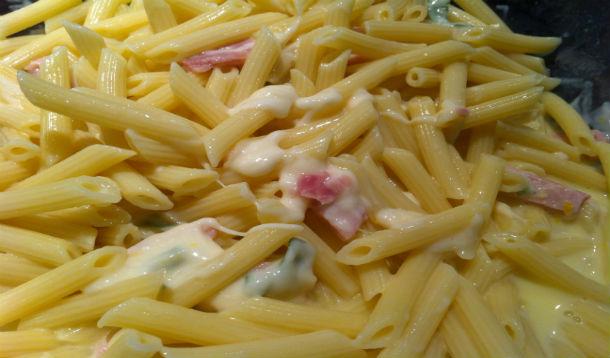 This recipe comes from a friend of mine who lived in Italy for seven years. It's a fan-favourite around our house!

I asked her what her son’s favorite meal was, and she said pasta, of course, but it was not the typical tomato sauce and/or spaghetti and meatball type I expected—it was what we call here in Canada a good old Mac n’ Cheese, but this one has an Italian twist!

It's so easy you won’t believe it, and it is made with whatever cheese and pasta you have left over in the house. 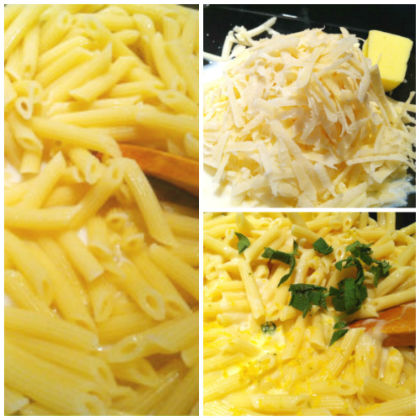 Use any shape of pasta you have in the pantry—spaghetti, macaroni, linguini, shells, etc.

Use all of the leftover cheese you have in the fridge—cheddar, parmesan, goat cheese, brie, etc.

Cook the pasta in a big pot according to the time directions on the package. Make sure to keep one little glass of the hot cooking water.

Grate all the leftover cheese in a big bowl, add a little chunk of butter and some milk (about 2 tablespoons) and add some of the hot water you removed from the cooking pasta. Mix well. The hot water will melt the cheese and you will get a nice sauce out of it.

To make it even richer and better, add one egg yolk, some lemon zest, and any minced fresh herb you have handy—basil, sage, thyme. You can add ham or any other meat if you'd like too!

When the pasta is ready, drain the water and mix it into the cheese mixture, making sure the pasta is completely coated with your fabulous improvised cheese sauce. 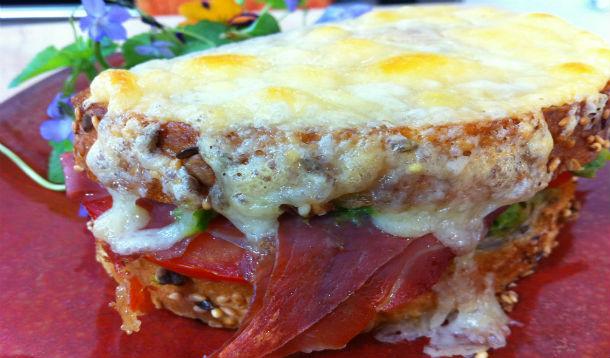 CANADA’S BEST SANDWICH CONTEST IS BACK: BIGGER AND BETTER THAN EVER

ACE Bakery and Food Network Star Bob Blumer, announced the launch of the highly anticipated Anniversary Edition of Canada’s Best Sandwich Contest. Building on the mouth-watering success of the contest’s inaugural year, the search is back on to discover new and even more spectacular sandwich recipes from across the country. In celebration of its 20th anniversary, ACE Bakery is tempting Canadians with a grand prize that is even sweeter than last year – $20,000.

Canadians across the country are encouraged to slice up their favourite ACE Bakery bread and put their unique sandwich recipes to the test. Canada’s Best Sandwich Contest: 20th Anniversary Edition will be accepting recipes on the ACE Bakery website from now through September 24, 2013.  Submissions will then be reviewed by Bob Blumer, Julie Van Rosendaal, popular Calgary-based blogger behind DinnerWithJulie.com, and ACE Bakery, and scored based on their taste appeal, creativity, innovation and originality.

On October 7, one regional finalist from Western Canada (including British Columbia, Alberta, Saskatchewan and Manitoba), Ontario, Quebec and Atlantic Canada (including New Brunswick, Prince Edward Island, Nova Scotia and Newfoundland) will be announced.  Each regional winner will be awarded a $1,000 cash prize, as well as a $1,000 donation to their charity of choice.  Additionally, the recipes of the four finalists will be featured at the ACE Bakery Café and Bread Store in Toronto during the months of October and November.  Last year’s winning sandwich, Thuy Nguyen’s Lemongrass Steak Banh Mi, will be showcased at the ACE Café for the week of August 19th for those looking for some additional inspiration.

The regional winners will then be invited to Toronto to participate in a Sandwich Showdown on October 17, where they will prepare their own recipes in front of a live audience.  Bob Blumer, Julie Van Rosendaal and Marcus Mariathas will judge the final creations and decide on the winning recipe.  The creator of the winning recipe will be awarded an additional $20,000 – $10,000 cash prize to take home and $10,000 to donate to their charity of choice.

For inspiration, here are some examples of sandwiches.... 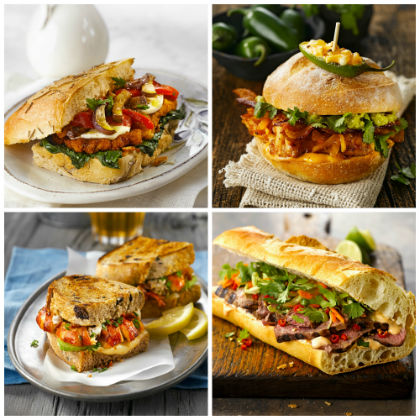 One of North America’s leading artisan bakeries, ACE Bakery opened in 1993 creating hand-made, European-style rustic breads.  The gentle shaping of each loaf, long fermentation periods, and a stone deck oven all work to create exceptionally flavourful bread with a pleasing texture and crisp crust. The breads contain no preservatives and are made with the finest ingredients. ACE Bakery’s baguettes and artisan breads are available at hundreds of restaurants, hotels, caterers, grocery and gourmet food shops across Canada, throughout the United States and the Caribbean.

Community involvement is an essential part of ACE’s philosophy. The company donates a percentage of its net profits to charitable organizations in the principle centres where ACE breads are sold. ACE’s focus is on food and nutrition programs that assist low-income members of the community, financing culinary scholarships and supporting organic farming initiatives.

Natalie Richard: In Good Taste In The South of France for Vendange