Seven Steps To My Lobster Bisque

I Am Still In The Mood And Very Inspired By Your Luscious Words.

Seven Steps To My Lobster Bisque 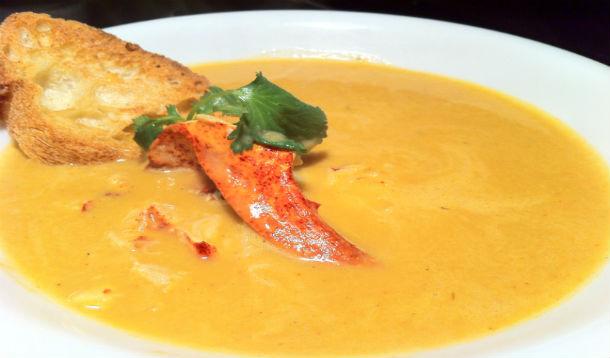 So I was thinking—what about taking you step-by-step into my Lobster Bisque? 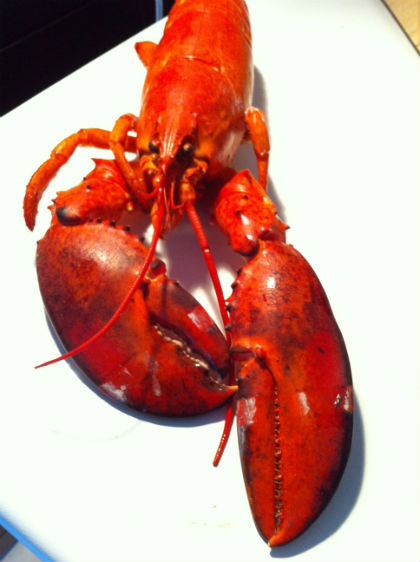 Not only do you not have to dive for it, but you can even buy it already cooked.

Remove the shell and set apart the beautiful meat from the tail and the claws. 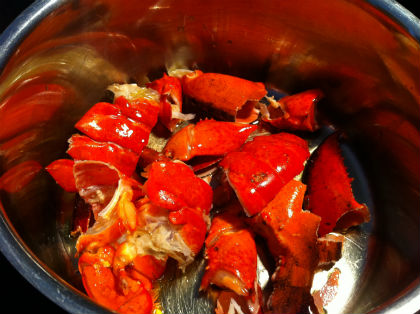 In a pan, heat 2 tablespoons of olive oil and simmer the shell for about 3-4 minutes, until you see a light colouring happen. 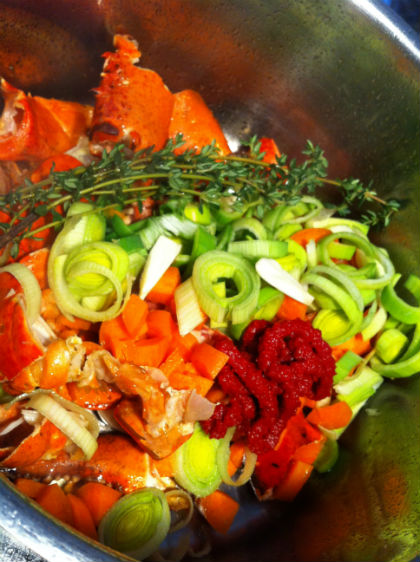 Add 1 carrot, 2 cloves of garlic, and half a leek (sliced), as well as 2 tablespoons of tomato paste and a nice branch of thyme. Mix well and simmer for another 4-5 minutes. 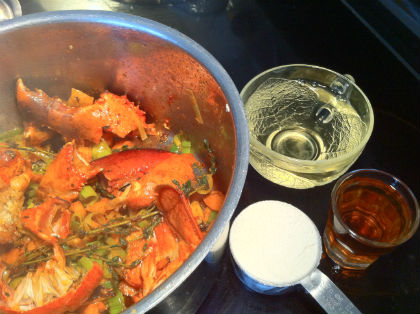 Add 1/2 cup of flour, 2 oz of brandy, and 1 cup of dry white wine, mixing well after you add each ingredient. It will make a thick, reddish, fragrant paste.

Smoothen the paste by slowly adding 4 cups of broth (fish, chicken, or vegetable), stirring constantly until smooth and velvety. Then gently cook for 30-40 minutes. 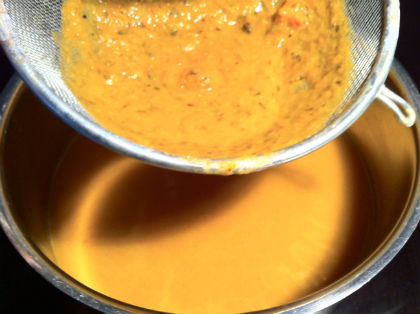 Remove all shells from the broth, then pass it through a sieve, reserving only the liquid. Return to simmer, add your pieces of lobster, salt and pepper to taste, and 1/2 cup of 35% cream. 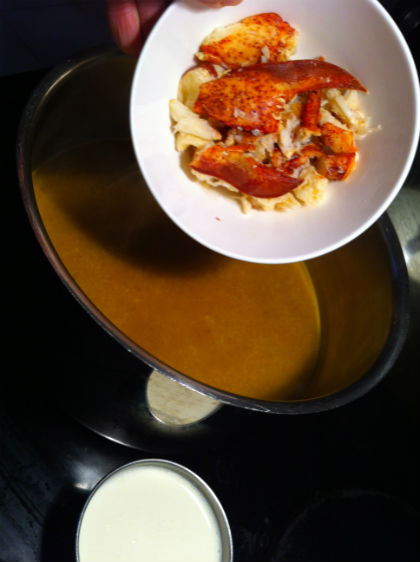 Serve with a crouton and a sprig of coriander. 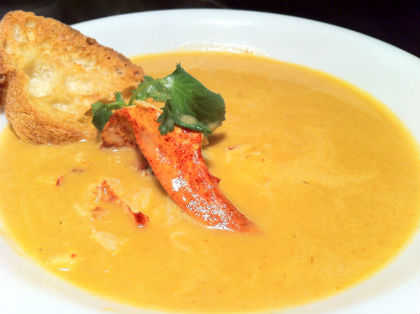 ...and I couldn't be more excited 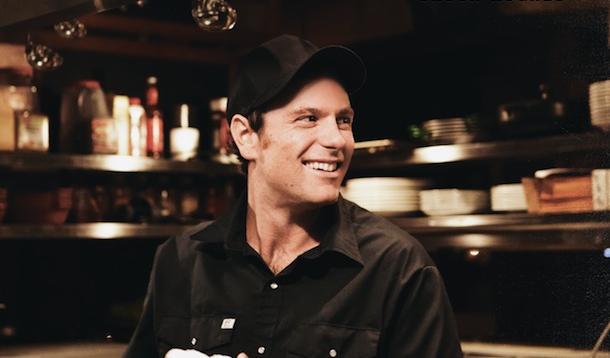 "My mother used to say don’t play with your food, and look what happened" -Chuck Hughes

I have a confession to make: I love Chuck Hughes!

When he opened his first restaurant in Montreal—Garde Manger—in 2006, I was there almost every week. Great food, great music, great people.

It was exactly how I would have wanted my place to be if I had my own restaurant! I am totally not surprised by his success.

This guy is infused with heart and soul—and so handsome too! As much as he used to hang out at Garde Manger a lot, shucking oysters and spinning music, Chuck doesn’t have many days off anymore, between the recordings of his tv shows and since becoming the first Quebec chef to win Iron Chef America—against American TV Superstar Bobby Flay.

But you know what? He is still the amazingly friendly and down-to-earth guy I met years ago. And that makes me appreciate him even more! 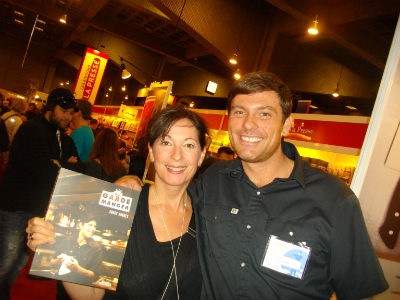 Chuck and his team recently opened a second restaurant in Old Montreal—Le Bremner—where they serve delicious raw and rustic food like raw beef, raw salmon, kimchee snow crab alongside such yumminess as steak n’cheese, hake n’clams, corn bread with broiled garlic shrimps. You have to try it if you ever visit Montreal!

But like Garde Manger—the place ‘he has built one oyster at a time’—Le Bremner is a small room and it runs at full capacity every night, so you do have to make a reservation. For Garde Manger, it’s good to know that they offer two nightly seatings, one at 7pm and another one at 9pm. If you are part of the second round, do not be surprised if you find yourself at a party after 10pm, the music gets louder and the crowd tighter as the night goes on.

And if you’re lucky, you might catch a glimpse of the guy with the lobster tattoo himself! 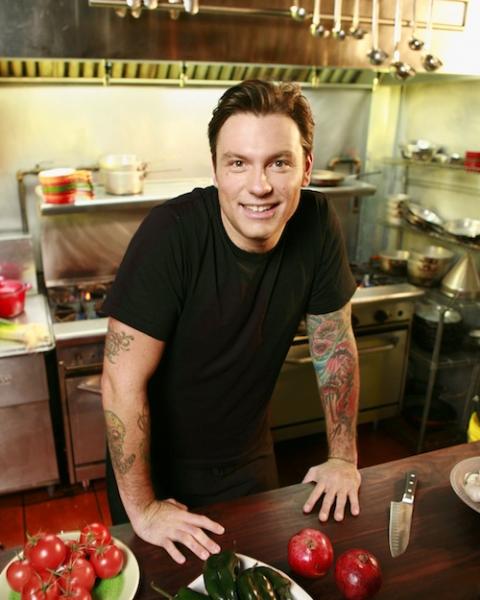 And for special treat, here is his famous lobster poutine recipe:

4 cups of lobster broth (you can replace by any broth)

6 Yukon Gold potatoes, washed but not peeled and cut in sticks

Cook the lobsters in salted water, 2 minutes. Cool and remove the meat form the shell.

For the sauce, simmer the broth and let it reduce until it thickens. Then whip in the butter. Adjust the seasoning with salt & pepper.

Make your French fries in peanut or canola oil.

Assemble the dish by laying the lobster and cheese over the fires and covering with hot gravy.

If you are a lobster lover, like Chuck, you will find many lobster recipes in his book, Garde Manger* set to be released on May 5th by Harper Collins Canada.

Also check out Chuck’s Day Off on the Food Network, a show that also runs on the Cooking Network in the US and in more than 12 countries around the world.