He, She, Zhe: How to Talk to Your Kids About Gender 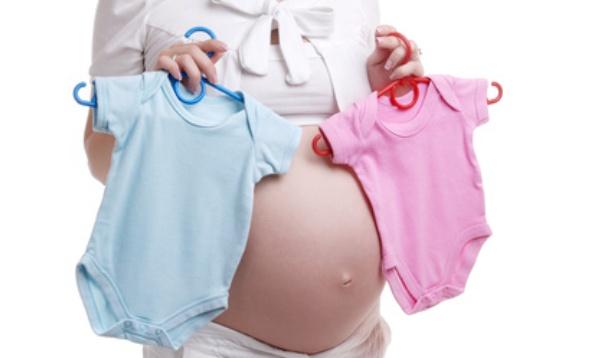 I mentioned in a recent post that I’ve struggled to explain gender to my own kid. Growing up my understanding of gender was that girls are the people with vulvas; boys are the people with penises. I was an adult when I learned that in fact, gender is an expansive spectrum.

When A Gender Reveal Party Goes Wrong
In many ways gender diversity makes a lot more sense to me than the binary I was taught to believe in growing up. But because my own education around this stuff began late in life, the language I’ve developed for talking about it is very grown up. For a long time, my frame of reference for kid-appropriate discussions of gender has been the simple penis=boy/vulva=girl model from my own childhood. I’ve been adamant about not wanting to teach my son gender binary. But more than once, I know I’ve gone way over his head with overly-abstracts explanations of how that facet of identity works.
Finding that sweet zone of age-appropriate accuracy is an ongoing process of trial and error, but over I’ve landed on a few strategies that have worked well my child,  and might work for some of yours too.
Use Your Brain!
In my early conversations with The Bean, part of me was still tied to the idea of gender being determined by the genitals that people are born with. Except for a lot of people it’s not. Gender identity is who we know ourselves to be. The Bean knows he’s a boy. It’s not because the doctor looked at his body the day he was born and declared “It’s a boy.” It’s because he knows himself. Once I realized that, I realized that there was a simple explanation for gender that didn’t involve the “down there” parts at all.

From Toddler To Teen: 6 Books That Teach Kids About Sex
“Our brains know who we are. You’re a boy because your brain tells you that’s you are. I’m a woman because my brain tells me that’s who I am.”
That seemed to be a workable jumping off point. Not that The Bean is a little older, we’ve been able to talk more about the fact that people’s brain know that they are boys, girls, both, neither or someone else altogether. We’ve also talked about how some people have the same gender all their lives, while other people change, but that it’s always important to believe people about their gender, because their brains know what they’re doing.
What Going On Down There?
At some point, most children see the body of a family member or friend and clue in to the fact not everyone has the same genitals that they do. Kids often ask questions along the lines of  “Why do they have [insert fun bits here] and I don’t?”
Again, I had some fits a starts in finding a child-appropriate answer when my own kid started asking. Eventually decided to explain it by telling him “Different people have different bodies.” Some people are bald and some people have hair. Some people have breasts and others don’t. Some people have two arms, others have one. Some people have a vulva, others have penises and others have different genitals than that.
When Bean gets a little older, we can talk about the cultural tradition of assigning babies one of two genders at birth, based on their genitalia and how that works for some people, but not everyone. But there’s time for that. Now, I’m trying to keep it as accurate and simple as I can,  and this explanation seems to work.
Answer a question with a question!
Little kid questions sometimes catch me off guard.  It’s not so much that they ask things like  “Mom, why do you have BIG BOOBIES? Howacome I don’t have BIG BOOBIES?” so much as the random timing. Like, why pick a crowded streetcar at rush hour to loudly express your body curiosity?
When I’m thrown off, my I have a go-to two-step strategy:
Step 1: Ask “Why do YOU think I have big boobies?”
Step 2: Ignore weird looks from fellow passengers.
I like questioning my kid’s questions mostly because it gives me a chance to collect my thoughts and come up with an answer. It gives me some sense of what he knows and doesn’t and where his information is coming from,  so I can share answer accordingly and correct misunderstandings if I need to.  Although I’m surprised by how much my son and I other kids come to understand about bodies and gender and even boobies, all on their own.
Ride The Unicorn!
This is the Gender Unicorn. 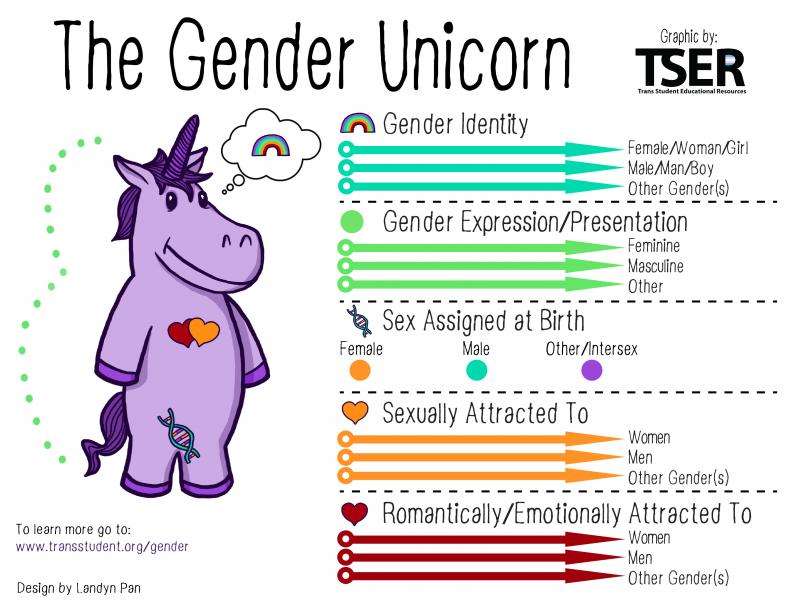 Gender Unicorn is a fantastic educational tool developed by the fine folks at Trans Student Educational Resources. It illustrates gender identity, expression, sexual orientation and sexual anatomy in very straightforward terms. You can mark your own gender experience on the various parts of Gender Unicorn and your child can do the same. I really like that this diagram is simple, straightforward, and interactive. Also, it’s a unicorn which is all the awesome anyone ever needs.
Expert Advice
If you’re trying to explain something to your kid and you find yourself getting stuck like I did, you can also turn to books, websites, community organizations and blogs devoted to gender diversity. I really like Gender Spectrum and their page on parenting and family issues for gender diverse children. It’s written for adults, but I think they do a great job of defining a lot of terminology and explaining why discussions of gender are so important for children. Here are a few resources that I use both for work and at home:

Gender Born, Gender Made by Diane Ehrensaft, PhD. A guide for parents raising gender non-conforming children.
Trans bodies, Transelves edited by Laura Erickson-Schroth. A comprehensive resource by and for trans people covering a range of social, sexual and health-related topics
My Princess Boy by Cheryl Kilodavis. This non-fiction picture book for young audiences, tells the story of the author’s son who enjoys traditional feminine clothes and activities.