Kids need to learn more than "no means no" 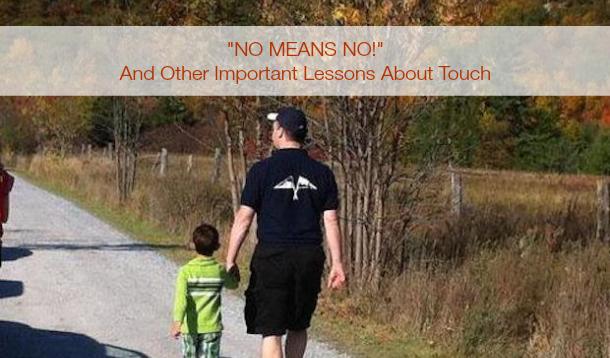 My son (known in Internetland as “The Bean”), loves being tickled by his dad and me. Lately when we approach him with our wiggly fingers, he jumps up at the last minute and runs away.

“You can’t get me,” he singsongs. The light in his eyes and the giggles that escape his lips as he ducks out of reach make us suspect that the thrill of a possible chase on enhances his enjoyment of our game. But it gave my husband pause. Like we literally stopped the tickling for a moment. Not because anything was wrong. It’s because we have rules in our house about touching and consent.

We’re a very affectionate family. We kiss, we hug, we snuggle, we hold hands, we roughhouse, and tickle. A lot.

This morning The Bean came into our room while my husband (he’s known in Internetland as The Man of Mans) and I were still in bed.

“Do you want to climb in?” The MoMs asked. This morning The Bean said yes. Sometimes he says no. A couple of weeks ago, he totally rejected my request for an after school hug. Apparently it would have seriously diminished his school-yard cred. And I didn’t hug him, because in our family — emergencies notwithstanding — no means you don’t get to touch that person. Later The Bean asked to sit in my lap later that evening while we read a book and I got some wonderful, snuggly time with my boy.

I want The Bean to have lots of practice asking for consent, giving consent and refusing consent. I want him to learn how to say the words and how to respect the words of others. But I also want him to develop an awareness of non-verbal consent cues. Which is why The MoMs and I had to cease and desist tickling when The Bean evaded us.

People don’t always say they don’t want to be touched. But they cringe, duck, cower, or go limp in ways that indicated they aren’t enjoying being touched. And I admit that from a parenting perspective this isn’t always a straightforward issue. For example, The Bean never likes having his skinned knees cleaned or getting shots at the doctor and we do those things to him anyway. But we try to respect the non-verbal cues wherever we can. Consent to touch needs to be sincere. I want The Bean to understand that just because he thinks someone is okay with what he’s doing, he can’t know unless he checks in.

In the case of the tickle fight, The MoMs and checked in. We asked The Bean if he wanted us to stop tickling him.

It felt like a teachable moment. I thought for a moment and asked, “So, you’re just pretending that you don’t want to be tickled? You want that to be part of the game?”

“Okay, we can do that. But maybe you can think of a special word that you will say if you actually want us to stop tickling, so that we know you really mean it.”

I asked The Bean. He says I’m not allowed to share his special word with you folks in Internetland. But there is one. And since its introduction tickle fights in this family have gone to the next level!

The Bean is just a little person, but eventually he will grow up. At some point he may want to have sex with someone and if he does, I want him to rock at consent. Because when it comes to sex, consent is everything. It’s always possible and it’s always necessary. I want him to assert his sexual boundaries like it ain’t no thang. I want him to hear a sexual partner tell him “no” and accept it like a champ. I want to ingrain the habit of asking permission to touch, of checking in to make sure it feels good, so that when he grows up, consent is a normal part of his sexual routine.

Our bodies belong to us. They’re where we live. Sharing our bodies with one another promotes affection, intimacy, pleasure and security. But no one is entitled to trespass on the body of another person. And no one forfeits their right to decide how and when they want to be touched. These are lessons I need my son to learn. Touch can be a very good thing...especially when we ask first.

Here's another important lessons kids need to learn about sex. And get the cherry popin' facts about the hymen!