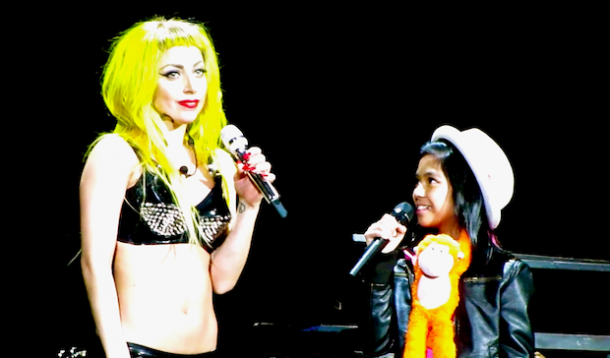 Canadians dig videos. Turns out we're the most video-watching nation on YouTube, which had over 1 trillion playbacks this year, averaging something like 140 views per person. But our tastes don't lean to the highbrow. As the top ten most viewed videos will attest, we tend to favour children, songs, silly cats and dogs, comedy and advertising.
But a certain 12-year-old from Winnipeg has YouTube to thank for igniting her musical career. Maria Aragon had loaded some 70 videos on the free site but it was her rendition of Lady Gaga's hit Born This Way that caught the world's attention. Her video climbed the ranks, becoming the third-most watched in Canada, and eighth worldwide with more than 45 million hits since it was posted in February.

"I'm just so overwhelmed and thankful for everybody's support," said Aragon whose life reads like a fairy tale since she posted the cover.

Gaga herself not only raved on Twitter about Aragon's performance, she invited the girl to a duet in Toronto. Aragon went on to sing the national anthem at Ottawa's Canada Day celebrations. She has recorded and released an album in the Philippines, appeared in U.S. talk shows and a Gap commercial to name a few.

All this before she'd even finished Grade 5.
"These are opportunities that don't come every day, so I'm trying to grab them while they're here," she said, sounding older than her years."
What did you think of her performance? What was your favourite viral video of 2011?
Category:
Culture - Music
Tags:
mummy buzz