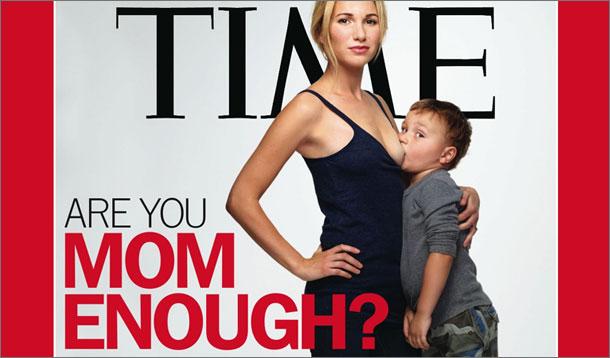 So by now you've heard the fanfare, you've seen the instantly-infamous cover of the latest TIME magazine: a 3-year-old boy, standing on a chair, suckling at his young mother's exposed breast.

Deliberately intended to shift copies and get people talking (including us!), TIME has succeeded at what it set out to do, and then some. Pointless sensationalism or a worthy conversation starter about the bennies of breastfeeding? Hard to say if the cover would have elicited the same response, had it featured a frumpy mummy instead of a pretty Californian blonde — 26-year-old mom Jamie Lynne Grumet — who has since been vaulted into the limelight, with appearances on the Today Show, alongside her guru, attachment parenting godfather, Dr. Bill Sears.

Grumet, though, claims she is only doing what feels natural, given her own experience of having been breastfed until the age of six because "my parents were really into nutrition." Needless to say, she sees nothing odd about having a grown boy hanging from her teet.

"It’s really warm," Grumet says in the article. "It’s like embracing your mother, like a hug. You feel comforted, nurtured and really, really loved. I had so much self-confidence as a child, and I know it’s from that. I never felt like she would ever leave me. I felt that security." She even nursed her adopted son simultaneously in November 2010, something she claims helped ease the 'trauma.'

"[There] are people who tell me they’re going to call social services on me or that it’s child molestation," she says. "But people have to realize this is biologically normal. It’s not socially normal. The more people see it, the more it’ll become normal in our culture. That’s what I’m hoping. I want people to see it."

Sure, breastfeeding is the most natural thing in the world to do. For babies. In North American culture, breasts are ultimately sexualized. Like it or not, that's is what's "socially normal" here.

What's the ideal cut-off for breastfeeding? When the child can speak in full sentences, or starts asking about (and noticing) the difference between male and female anatomy? Or should it be up to the child to decide when to wean?