Life's No Pageant for Child Models 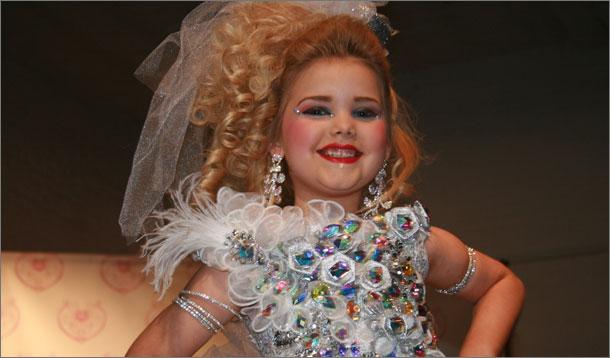 Ok, so child modelling isn't all the creepy shellacked hairdos and fake eyelashes of the TLC show Toddlers & Tiaras.  But is pageantry actually good for young girls who are increasingly sexualized?

A French senator doesn't think so and hopes to ban such beauty pageants and sexualized clothing for tykes, which she sees as a step backwards for gender equality.  Really, do we want to send little girls the message early on that their intrinsic value comes from looking pretty?

Chantal Jouanno wrote in a parliamentary report that dressing children as “sexual candy” is “contrary to the dignity of the human being.” Jouanno also hopes to prohibit advertising agencies from using child models under the age of 16, and to ban padded bras and high-heeled shoes for girls.

So much for the stereotype of the sultry French.  The government report came after the international outcry over Vogue Paris’s provocative photo shoot of 10-year-old model Thylane Loubry Blondeau in heavy makeup, jewels and stiletto shoes—a shoot that Thylane's own mother didn't even oppose.

“The only thing that shocks me about the photo is that the necklace she is wearing is worth three million euros…my daughter isn’t naked, let’s not blow things out of proportion.”

Sadly, many of the little girls involved in pageantry are spurred on by their mothers, who wish to live vicariously through their children. Mirror, mirror, who's the fairest of them all?  Let little girls be girls.  The pressure to be thin and sexy is monumental, and it comes early on for today's children.

Do we really want to be the ones imposing the very beauty ideals that enslave us as women?  Isn't it our role to protect our girls—and give them the tools to love themselves in spite of the media's overarching influence—for as long as possible?