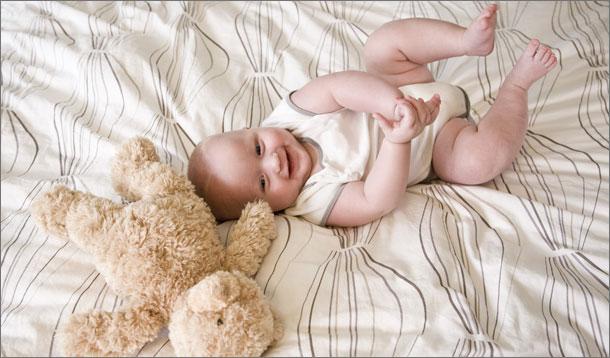 Everyone knows first-time parents are a little (ok, a lot) paranoid. And quite rightly so, with the ever-present risk of Sudden Infant Death Syndrome (SIDS) and the increase in premature births.

Now there is a new baby product to profit -- ahem -- put you at ease in the middle of the night. Introducing Exmobaby, the digital onesie. Believe it, people. This new sleeper makes those 'nanny cams' and high-tech monitors that measures your baby's every breath and movement look so last year.

Not only does the biosensor perform "electrocardiogram tests to measure activity in the heart, record skin temperature and movements, and alert parents to restlessness," according to the manufacturer's website, this wonder onesie can even detect 'mood changes' and a soggy diaper. And all this vital intel gets send to your iPad or smartphone, in a nano second.

“The world's only baby sleep garment that does not depend on a human being to communicate how a baby is feeling.”

But before you go grabbing your plastic, consider that the garment doesn't yet have a release date, nor has it been approved by the U.S. Food and Drug Administration (though the company hastens to add that the radiation released in the clothing is “minimal.")

It's estimated that the onesies will retail at around $99, plus about $10 a month for the wireless service. Now, if only they could patent a robot to change that soggy diaper...

Convenient technology or crazed postnatal paranoia? Would you buy it?