An Army Of Clones 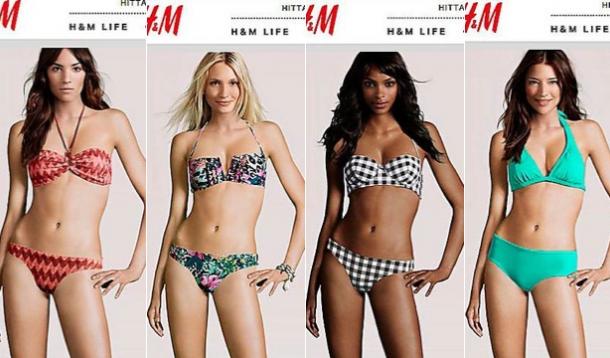 Another reason not to believe everything you see. H&M is getting more flack for the models on its website, after a rep admitted the retailer uses cyborg models to "best display the clothes."

So rather than see a model airbrushed for its ads, H&M cuts and pastes a model's head on a virtual body then matches the skin tone. In essence, we are getting sold a single generic skinny body time and again. Even, spookily, down to the same cloned belly button.

Apparently H&M isn't the only culprit; virtual models are increasingly standard practice in the fashion industry.

In its defence, H&M claims that clothes look better on virtual mannequins than on real women. “It is regrettable if we have led anyone to believe that the virtual mannequins should be real bodies. This is incorrect and has never been our intention,” Nicole Christie, spokeswoman for the chain’s U.S. operations, told ABC News.

Some suggest the ads should come with warnings and disclaimers, much like cigarette packs, saying this ad has been virtually modified, so as not to lead young impressionable women astray.

"To all involved, we say, keep doing what you're doing if you must -- just tell us you've done it. Maybe then we will realize that the women in those ads and spreads are about as real as Avatar, and thus, we'll see it as escapism and not as realism to which we don't measure up," said Seth Matlins on the Huffington Post.

Are the cyborgs any worse than the radically Photoshopped bodies of models? Is this a kind of false advertising?