Also, Why Anthony is Still Smiling 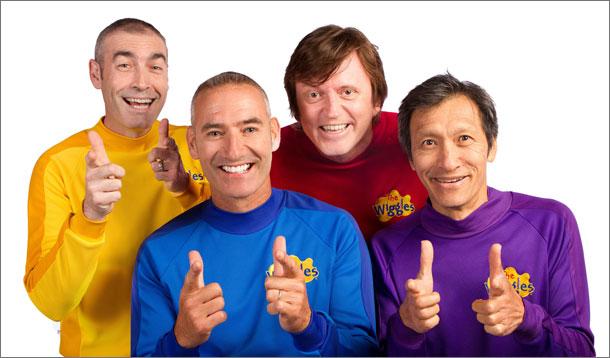 Get ready to wiggle... With some new faces, that is. Those Aussie coloured-shirt clowns are in for another lineup change. But will your tot even care?

Three out of four members of the preschool supergroup the Wiggles are about to retire.  Only early education pioneer Anthony Field (the blue-shirt wearing one with the blindingly white teeth) will remain in situ because he "loves it too much."

Can it really be 21 years since Jeff Fatt (purple) Murray Cook (red) and Greg Page (yellow) entered our lexicon?

"It's time to hand over our purple, red and yellow skivvies to a new generation of Wiggles," Cook announced in a special video.

Newbies include members of the live show, Lachlan Gillespie, Simon Pryce, and the first female 'wiggle' -- 20-year-old dancer Emma Watkins -- who will don the yellow Tee. (Discounting Kylie Minogue, who was declared an honorary pink Wiggle in 2009.)

It's not the first shift change in the Wiggles's history. Founding member Phillip Wilcher took leave after the first album and became a classical pianist, while Page took a six-year sabbatical due to ill health.

Though Page has recently returned, it's not likely that many fans (given the demographic) will have noticed he was gone. But the parents certainly have.

Believe it or not, what started out as a college band known as the Cockroaches, evolved into an kids music outfit that net the members an estimated joint income of $32m. (No wonder Field is always flashing those pearly whites.)

After two decades of recording and touring, the retirees are ready to hang up the coloured shirts, though they will continue to contribute material to the group.

"The touring and performing over the past 21 years has meant that we've spent a long time away from our own families and friends," Cook said in the video. "We miss them and want to spend more time at home, which is a major reason why three of us decided it was time to hand on our skivvies to a new generation."

For those wanting to catch the Wiggles (as we know them), a last hurrah tour called the Celebration Tour will make a pit stop in North America before returning down under.