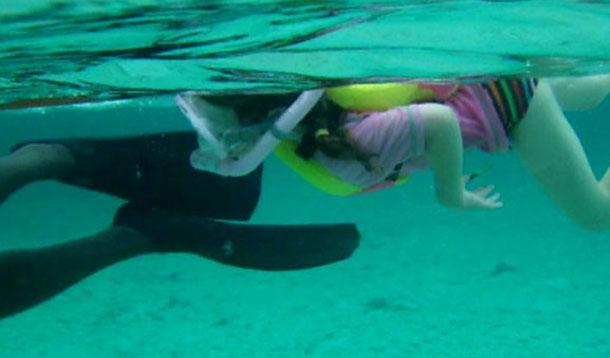 Life is too short to be boring. But it almost became even shorter for the free-spirited Connecticut couple that let their five-year-old daughter swim with sharks recently.

Not only did parents David and Elana Barnes let their daughter Anaia share shallow waters with reef, lemon and nurse sharks while on vacation in the Bahamas, they proudly posted a YouTube video to commemorate the adventurous moment.

Even though the aforementioned sharks are considered "very low on the aggression index," they are sharks, not dolphins. (We're talking Jaws, people, not Free Willy.)

Of the 75 recorded shark attacks last year, according to the University of Florida’s International Shark Attack File, only 16 were fatalities.

Needless to say, footage of the little Barnes girl frolicking in the water with sharks provoked a frenzy of response, and divided commenters.

While some accused the parents of common sense fail by endangering their daughter, others were decidedly more relaxed about the swim. “It’s not like the kid was covered in chum and tossed into the water alone,” said one reader.

Mom Elana compared the shark swim to other thrill-seeking activities. “Like going on a rollercoaster, you’re probably not going to fall off, but it’s still scary.” Then again, there are age/height restrictions on roller coasters for a reason.