Dr Seuss: Too Radical for School 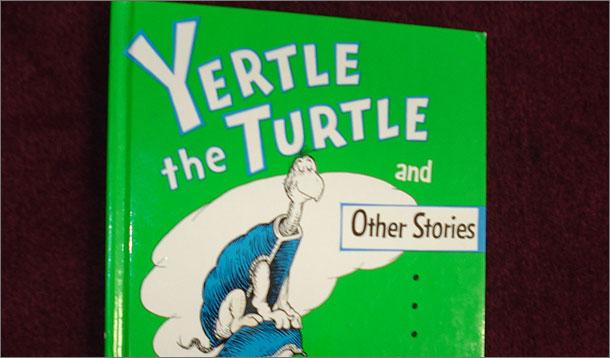 When you think about radical political figures, Dr Seuss doesn't exactly what springs to mind. But one book by (arguably) the greatest children's book author of all time has a B.C. elementary school board up in arms.

Although it seems absurd, Yertle the Turtle has been banned from an elementary school in Prince Rupert, according to the 2011 arbitrator’s decision stating that "political materials must be kept out of B.C. classrooms."

Acting director of instruction for the Prince Rupert School District, Dave Stigant, deemed it necessary to boycott the book after reviewing this quote from Yertle, the tale of a turtle who climbs on the backs of other turtles to get a better view:

“I know up on top you are seeing great sights, but down here on the bottom, we too should have rights.”

There was some speculation that the quote might be applied to the current labour dispute between the British Columbia Teachers’ Federation and the province.

“I don’t consider it’s taking a stand on the [current labour dispute]," said Mr Stigant. "It’s a matter of legality and living up to our obligation to children and their families.” He warned that teachers found sporting such a quote on their person would be 'disciplined.'

Ever since teachers went on strike last year, which culminated in a three-day walkout in March, relations with management have been strained. Although the strike has now ended, with the implementation of the new Bill 22 and a mediator, the disagreements continue over such issues as wages and classroom conditions.

Is quoting Dr Seuss too political or simply a piffle?