Domestic Goddesses Could Be a Dying Breed 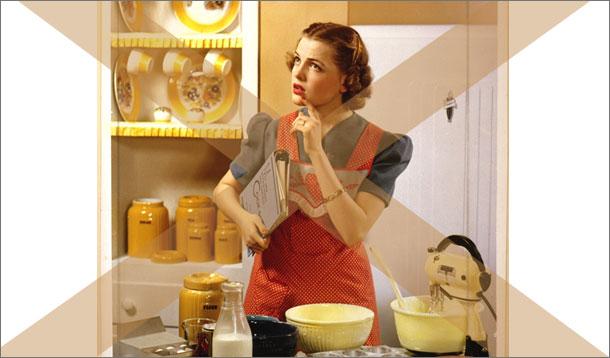 Our moms, and their moms, are a dying breed, it seems.  All those traditional Home Ec skills, so prized and unthinkingly learned, are fast becoming extinct to today's busy mom. What were formerly 'momrequisites'—such as baking, making pastry and jam, knitting, and altering clothes—aren't as common as they once were.

Although many moms today wished they have their foremothers' domestic talents, few have the time or patience to learn them.  So says a UK-based study by oven manufacturers Neff, whose Bake It Yourself campaign targeted 1,000 moms under 35, and 1,000 over 45.

"We know that modern mums are under different pressures today compared with 40 years ago.  As a result, many mothers find it difficult to do some of the daily tasks their own mothers may have done," said Neff spokeswoman Sue Flowers. "However, our research has shown that many do want to learn how to do these things and feel as passionate as we do about ensuring skills such as baking and sewing don’t die out."

Our grandmothers would be ashamed to learn of that the majority of us can't do things like starch a shift, make a gravy, sew name tags on our kids' clothes, or rustle up a Victoria sponge cake.

Fortunately, the tide is changing, as many moms take an interest in learning these traditional skills, even just as a hobby, after their children are born.

Admittedly, the over-45ers fared better than those under 35. Ms. Flowers stressed the importance of such skills to be handed down from one older generation of women to another.

"We all like to rely on our mom for help and advice, which is why it’s such a shame that younger moms today find themselves too busy to enjoy time spent baking with their children and other traditional tasks."

Courtesy of the Daily Mail, here goes the litany of things most of us modern moms can 'no longer do':

Do you feel you're missing out, or is this list outmoded? What domestic tasks do you wish you could learn to do at home?