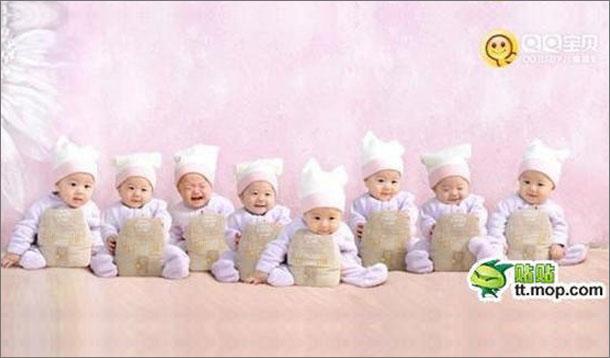 It might look like an Anne Geddes portrait, but in fact this image of eight little babies in identifcal onesies is the subject of intense national scrutiny. Those babies belong to a couple... in China.

That's right, China -- where couples are still supposed to be limited by the state to have no more than one child. Intended to promote a photography studio, the photo has unwittingly brought to light a double standard whereby rich couples flout the rules to conceive larger families by illegitimate means. In this case: nearly a million yuan ($160,000) to illegally enlist surrogate mothers.

Not only is surrogacy illegal in China, it is frowned upon by the media which has dubbed the mother of eight “babaotai muqin,” or “octomom,” a pejorative American idiom. The China Daily denounced the practice as "something done by wealthy women unwilling to disrupt their careers or ruin their figures."

Another writer, Cai Hong, worried that surrogacy would "give rise to a breeder class of poor women who end up renting their wombs to wealthy people."

Yet the fact remains that women in China, and the world over, are deferring childbearing until it's often too late. And a Daiyunguke surrogacy agency claims business is booming as a result.

Although this particular family's identity hasn't been revealed, the Guangzhou Daily newspaper revealed that the biological mother carried two of her babies, while two surrogates gave birth to three each. Following the birth of the brood, the couple reportedly hired 11 nannies to help care for the children.

With all the recent press, the octo family has, perhaps not surprisingly, gone underground to avoid the media glare. Well, as easy as it is for 11 nannies and eight babies to hide.

Is it time to lift the one-child quota and/or make surrogacy legal in China?