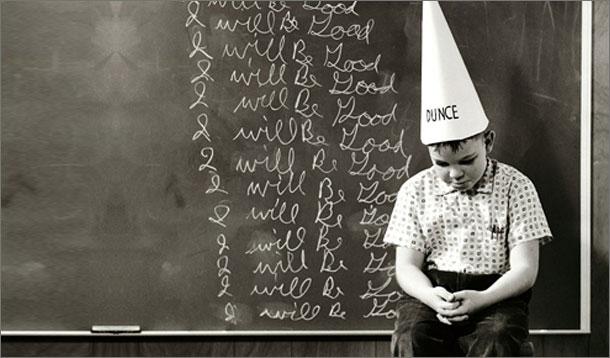 Ok, so maybe I'm too young to remember the dunce cap or maybe it's just an urban legend meant to scare kids into behaving in class. Regardless, there's a new form of shame in today's classroom.

An Arizona Grade 3 teacher singled out one slacker student and awarded the “catastrophe” award. Cue riptides of laughter and crimson cheeks.

Needless to say, the child's parent fought back, arming themselves with "a folder full of completed assignments."

“I think it’s cruel and no child should be given an award like this," said mother Christina Garcia. “It’s disturbing.”

In this neck of the woods, an Edmonton teacher was suspended for allegedly doling out a 'zero' grade for incomplete or missing assignments or exams—a practice forbidden by the school's policy.

“It’s a way of pushing kids through even though they’re not actually doing the work,” said physics teacher at Ross Sheppard High School, Lynden Dorval.

Dorval told the CBC that this grading system "gives kids the impression that they aren’t accountable for their actions."

Instead of grading a zero, teachers are encouraged in the Assessment, Grading and Reporting Practice 2011-12 to use codes like NC (Not Completed), NHI (Not Handed In), CNA (Chose Not to Attempt) and, interestingly, ELT (Elite Athlete).

The school insists the zero grading isn't the reason for Dorval's suspension. But it does raise some interesting questions.

Once upon a time during my school career, teachers were told they could no longer use red ink to mark papers (because, apparently, the colour red seemed a little harsh). Even as a student, I remember thinking this was a bit trite and ridiculous. But hey, I wasn't the ones making up the rules.

Admittedly, shaming tactics like the catastrophe award probably do little to encourage academic performance. But are we really doing our kids any favours by failing to fail them?